There is nowhere in New York that symbolises the city’s flux quite like Williamsburg, Brooklyn. Originally a place where German, Jewish and Latinx immigrant communities made lives, the neighbourhood is now a synecdoche for global gentrification and the rapid creep of urban regeneration. On a bright October day with the first cold snap of autumn, a sports bar with plasma screens is frying up its first chicken tenders of the day, as posters advertise a newly opened Sephora. And a block away from the once-beloved, now-shuttered DIY institution 285 Kent, a sugar factory complex has become an amusement park of overpriced tacos and skyline selfies. You feel that, if you blinked, a juice bar would appear.

Oyinda, whose chameleonic songcraft explores tensions between tradition and futurism with its mesh of blues, soul and 22nd-century electronic sounds, is a refreshingly enigmatic presence here. She slinks into an airy cafe wearing a wide-brimmed black hat and dark layers that flutter behind her, making her look like the final boss on Castlevania. Ordering an aromatica – a Columbian infusion with floating chunks of fresh fruit – I notice her oversized rubber phone case, shaped like the lonesome ghost No-Face from Studio Ghibli’s Spirited Away. “I change it according to my outfit and my mood,” she says. “I’m in a shy-guy mood today. I have a Totoro case for when I’m feeling a little more playful.” 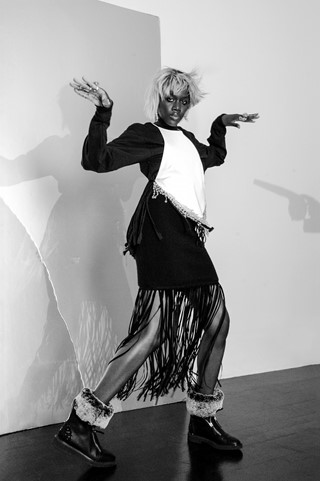 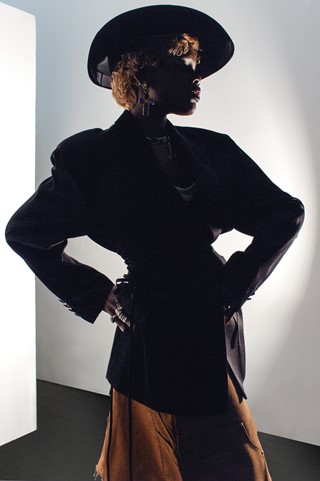 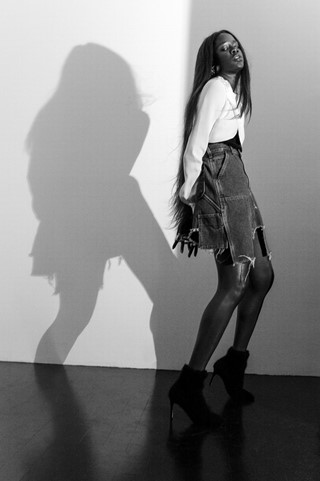 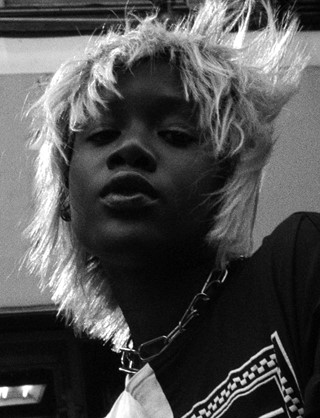 An ability to distil both introvert and extrovert tendencies is crucial to Oyinda’s work. The latter came to the fore at Telfar’s AW18 show-turned-gospel-sermon in New York this February, where she performed rapturous harmonies with Dev Hynes, Kelela and Ian Isiah on the runway-turned-stage. (She returned to collaborate with the label for their SS19 show.) In her videos and performances, Oyinda has an uncanny flair for drawing your eye, but also fixing it with a steely stare of her own, revealing a rapier-sharp purpose. In the sci-fi-inspired video for last year’s creeping, low-end electronic soul single “Serpentine”, she is rendered in CGI, a seductive android with Bantu knots; in another, “Never Enough”, she meets the viewer with a challenge, singing, “Watch me move like I’m up on the big screen” in a comment on agency, spectatorship and sexual politics.

As the cafe pipes in lively post-punk, and the glow from a skylight catches leaves trailing the walls inside, I ask if Oyinda’s childhood in High Wycombe, Buckinghamshire, was a happy one. “Define happy,” she replies, explaining the flaws in taking a rose-tinted view of childhood. “I grew up in a predominantly white school so often it was like, ‘You’re the funny one,’ or I would have to play the villain. When I was six, one of the girls in my class casually said, ‘My father’s gonna kill you ’cos you’re black.’ Having to deal with that with no allies was really odd.” She stops to sip her tea. “But I cherished growing up that way. I think it’s made me who I am.”

Oyinda’s parents, Nigerian political refugees, created a home that was filled with bright prints, and often the rich smell of her mum’s pounded yams and okra. Artists like Whitney Houston and Luther Vandross got regular rotation in the house, but her mum’s favourite was Celine Dion’s The Colour of My Love, which was played so often that Oyinda swears she can still sing it from start to finish. Raised with an older sister and a half brother, Oyinda loved to draw as a kid and was obsessed with anime like Dragon Ball Z and Sailor Moon. “I was always in my own bubble,” she says. “I was not trying to hang with too many people. I guess that was my little defence mechanism.”

Oyinda was acting in local plays from the age of four, and later enrolled in the Lamda classes offered at her local school, learning ballet and cello. After moving to London and releasing the piano-led Before the Fall, her debut EP of soulful piano ballads shot through with southern-gothic drama, she moved to New York the following year, in 2015.

There, she found a community of sorts. Oyinda’s friends today include producers Low Noon and Canteen Killa, experimental vocalist and cellist Kelsey Lu, and psych-soul artist Nick Hakim, who she’s due in the studio with the week after we meet. Inspired by Pussykrew’s dimension-shifting work with London producer Cadenza, Oyinda sought out the duo to create the video for “Serpentine”. The visual was partly conceived as “a female-centered version of the Blade movie,” Pussykrew say, as well as a corrective to the lack of women of colour in VR spaces. For the double helix-like narrative, Oyinda looked through a third eye. “I had these two storylines very much based on hypnotism,” she says. “I wanted that underlying quality of travelling realms within yourself.”

“Serpentine”’s utopian vision of transhuman possibilities calls to mind “A Cyborg Manifesto”, the 1985 essay from feminist scholar Donna Haraway proposing cyborg existence as a way to see past the traditional limitations of feminism, gender and identity. Technology is already part of what it means to be human, Haraway acknowledges. Why not embrace its possibilities of transcendence?

“It’s not that I had underestimated how important representation was, it’s more that I hadn’t realised I had lost hope for it” — Oyinda

In a world which confines black women to narrow margins, the desire to escape rigid confines has been on Oyinda’s mind. “A lot of the time I’m judged based on my skin, which affects what people assume my music is going to be,” she says. “Automatically I’m called R&B, although my music isn’t quite that. I grew up listening to R&B singers and I’m sure there’s a riff in there, but I also come from a jazz and blues background. I find it a bit insulting."

In other CGI collaborative visuals with Pussykrew, Oyinda plays an almighty, Gaia-like deity. “They were very much an Akasha moment,” she says, referencing Queen of the Damned’s bloodthirsty vampire, played with fire and fury by Aaliyah. “I wanted to be someone who could be everlasting. When we look at ruins, we never get to see the ones that look like other Africans, and it’s not historically accurate. (Those videos were) an acceptance of me. I have to learn to accept myself the way that I am, even though society always tells us not to.” The music world is far from being immune to racially biased attitudes, and Oyinda ditched a former PR agency who, she says, “were trying to paint me as this angry black girl”.

Oyinda’s deeply felt new music, due in the spring of next year, began to germinate after she visited the Los Angeles Contemporary Museum of Art’s 2017 Kerry James Marshall retrospective. His masterful, tender paintings of exclusively black subjects prompted painful reflections on Oyinda’s own experiences with marginalisation. “It’s not that I had underestimated how important representation was, it’s more that I hadn’t realised I had lost hope for it.” She pauses, as if to weigh the heartbreak in her words. She swipes away a tear. “It was a really sad moment to be like, ‘When did you start thinking that you couldn’t be the exception? When did you become so hopeless?’ That was like a real wake-up call for me. That’s why I wanted to pause and be like, ‘OK, there are so many things I need to unlearn. There are so many things I need to shed.’”

Oyinda’s new mixtape is about resisting those self-limiting impulses while plunging into new personal depths. Each song takes a Marshall work as a loose starting point for slippery electronic soul which crackles with tension and touches on themes like prejudice, hollow virtue-signalling, and the search for peace and survival in a hostile world. Today, Oyinda speaks of the record as a turning point, and seems ready to abandon the CGI futurism to show a rawer side of herself, shedding another layer of skin. “I really wanted to challenge myself in that sense of writing from personal experience,” she explains. “I’m getting triggered. But I really wanna be raw and exposed in this. It’s going to be all me, and I slowly gotta figure out how.”

Oyinda’s new mixtape is out in February 2019