Taken from the autumn/winter 2018 issue of Dazed. You can buy a copy of our latest issue here.

It’s mid-afternoon in an empty community hall in north London, and images taken on the dancefloor of a 90s clubnight flicker onto a wall.

“No music please, there’s a fucking nightclub in my head,” Goldie demands when he enters the room for a photoshoot, only half joking. The gooned-out revellers in the photos behind him are enjoying the strange fruits of Metalheadz, the night Goldie ran that forced everyone from Billy Zane to The Spice Girls into a cacophonous basement in Hoxton. After launching in 1995, the promise of atom-splitting UK jungle and celebrity sightings made Metalheadz the world’s most unmissable vibe, and Goldie the marshall of a wild new musical frontier. 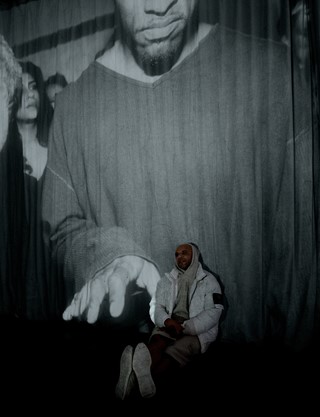 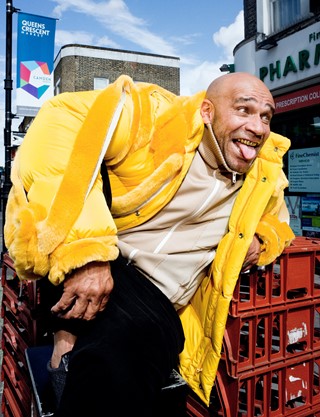 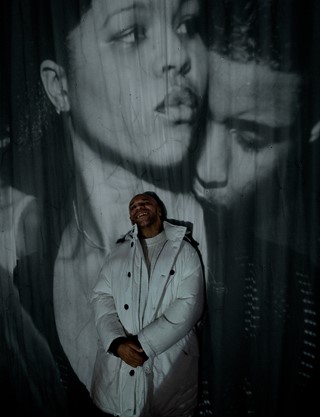 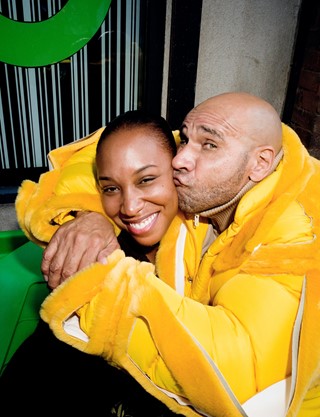 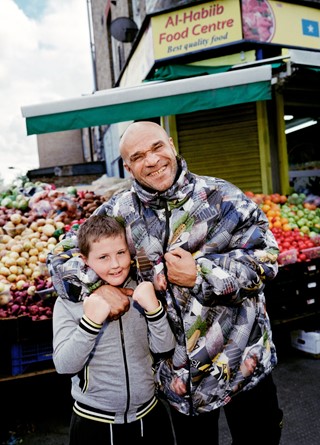 There’s a radical intimacy to Goldie in real life. “I’m gonna give you a really hard time” the songwriter promises me, before suggesting we interview in the middle of a busy market junction just off Camden High Street. Our conversation veers manically between moods: one moment he’d be muttering something about BPMs 50 yards away, the next we’d be so close our noses were touching, and I could smell the jagged gold enamel on his teeth. We hug tightly when I mention “Ghosts of My Life”, his Japan-sampling 1993 track that laid the tarmac for Burial and futurist-philosopher Mark Fisher.

From 93 we jump to 2018, when he will release a new collaborative work, a 12-track love letter to his ambient heroes called Act One: Music for Inanimate Objects. Made in collusion with his regular engineer James Davidson under the joint moniker Subjective, the album is intricately arranged mood music that wears Thailand — the country Goldie moved to four years ago — round its neck like a garland.

Beyond a reference to Brian Eno both in the title and overall feel, the album sounds freer from the pressures of metropolitan life than any of his music to date. Tracks like “Find Your Light” and “Stay” see serpentine synths jostle with occasional junglist flourishes. It’s a million miles from his 1995 breakthrough album Timeless, a hardcore symphony that rewrote the rules of electronica under the weight of a rapidly changing London. “A guy told me it’s the best thing I've ever made,” Goldie says. “I can laugh at that because it isn’t. It's the easiest thing I've ever done.” Just like Goldie the person, Music for Inanimate Objects is a contradiction; a battleground of emotions and textures that unravel over time.

Shortly before it was recorded, Goldie was diagnosed with a heart condition called premature ventricular contraction, meaning he has the pulse of a 17-year-old on a diet of Red Bull and Jolly Ranchers. (Or, as he puts it, “like a drummer going out of time on purpose.”) The diagnosis has forced him to savour the music-making process, to exorcise any self-imposed pressures and to immerse himself in the joys of collaboration. “You know the track is going well when you turn to say something to Goldie and he’s stripped to his underwear like nothing’s happened,” recalls Davidson, who Goldie lovingly describes as “the Milhouse of breakbeat,” and who he remembers going missing for several days during recording, lost in a maze of local nightclubs.

Goldie plunged deep into his references for the record. Synth-based track “Re-Entry” swarms the senses in homage to the fogged-out score of John Carpenter’s The Thing. Meanwhile “Silent Running” is a nod to the 70s sci-fi film of the same name, wherein Bruce Dern plots the earth’s survival from space after total environmental collapse. “The film shows you the state of the world so early on and basically where (climate change is) at now… it’s like, yeah that mayhem has happened, we’re here, we’re living in the madness.”

“(Metalheadz) was Studio 54 for the street people. It galvanised artists and skaters, rastas and dreads... people with trauma” — Goldie

Goldie compares making music to his other loves, painting and graffiti. Born Clifford Joseph Price, he grew up in the Midlands town of Walsall, was moved into foster care at the age of three and later, as a teenager, embraced the local breakdancing scene. Soon, his psychedelically angular ‘Wild Style’ graf gained him momentum in larger surrounding cities like Wolverhampton and Birmingham, and with significant west country artists like Massive Attack’s 3D. After a trip to one of Fabio and Grooverider’s axiomatic breakbeat parties Rage in London, Goldie’s focus turned to music. Like the flicks of a spray can, the irregular jazz tints on Music for Inanimate Object’s opener “Midnight Monsoon” are moments of pure inspiration. “It just so happened that my form changed from painting to painting in my mind,” he says. For Goldie, music making is taking to a blank canvas, where anything is possible.

His first interview at the age of 17 introduced a young electronic artist with visions far into the future. “I just want to change things, you know?” he declared on the famous graffiti documentary, Bombin’. On his debut single “Terminator” a decade later, Goldie pioneered a breakbeat technique called time-stretching, which sounded like the dials on his mixer being pulled back like an elastic band and released into infinity. “You have to find the sound that’s not there,” he said in a YouTube clip last year. “Smash it up. Throw it out. Break it to pieces you like. But do it, make the sound, be barbaric.”

The chambers around Goldie’s heart have been recorded and will make it onto Music for Inanimate Object’s follow up, he tells me. He wears the trauma of his past, including his experience of sexual abuse as a child. If anything, this damage is useful to him. “I’m eclectic in my tastes because of my trauma”, he says. “It’s madness. It’s almost ADHD.” “A Goldie production really does mess with your mind, body and soul,” agrees Storm, who set up a record label with Goldie – also called Metalheadz – in 1994.

Our meeting happens the week after a new landmark blow for London’s nightlife scene, when Hackney Council passed a motion to order all new venues to close at midnight on weekends. The last time this kind of thing happened – in early 2017, when the super-club Fabric was temporarily closed – Goldie went on national news threatening to liquify his silver MBE trophy. “The fact it’s now reopened is a token freedom,” he observes, likening the squeezing of underground culture in the city to wider issues surrounding opportunities for young people. “If you're gonna reward your child for running a 100m race and he wins the race, and then he wins the county championships, and all of a sudden you just take the track away and he's got no place for running…”

The club Metalheadz, he points out, was the exact opposite of a token freedom. It was a space for total freedom, a jumble sale of groundbreaking sounds, local artists and flown in A-listers (including Goldie’s then-girlfriend, Björk). “It was a Studio 54 for the street people,” he suggests. “It galvanised artists and skaters, rastas and dreads and scallywags and alkies and people with trauma, all in in the same building.”

“The fact that (Fabric) reopened is a token freedom” — Goldie

Told that his cab has arrived, Goldie reflects on why he had tested me when we first met. “I was interested in the first question you were going to ask me — it was a little cheeky, but ‘let me see what he’s made of’.” Interviewed about his time as the club’s regular roadblock DJ, Fabio recalled Goldie ringing selectors up to intimidate them before their sets. “Everyone played for Goldie, to impress him,” he remembered. “You couldn’t go in there without the freshest music. You couldn’t fuck up.”

Next year, Metalheadz will celebrate 25 years as a label. It almost goes without saying that the sounds that propelled it, Goldie’s hallmark teeth-rattlers “Terminator”, “Ghosts of My Life” and the crushing “Saint Angel”, still sound completely fresh, visions of a future that still seems so far off. That he is still pushing himself, and everyone around him, is why Goldie remains such a compelling figure. For a moment earlier in the day, against the sodium glare of the photographer’s projections, he seemed almost immortal.