‘I’m so relieved the whole ‘guys with a band’ era is over’ — meet Sweden’s most outspoken riot grrrls, with fame and fuckboys in their crosshairs

Standing in the middle of a mansion, chihuahua slouched across one arm and draped in a dress stitched with dollar bills, Groovy Nickz recites a deadpan takedown of the American president. Running around after a baby incarnate of the leader of the free world, mixing up feeding bottles filled with red wine as she plays babysitter in the video for “White House”, the Dolores Haze frontwoman has clearly found a better way to spend Donald Trump’s money. Silencing the idea that you have to choose between style and substance, Dolores Haze is a band that’s unafraid of pulling political punches while serving up a sickeningly flawless look to match.

After emerging with debut album The Haze Is Forever in 2015, the group is back inside a Stockholm recording studio when we speak. Formerly a quartet, they’re currently made up of three members – with Groovy Nickz at the helm as lead singer and bassist, Lucky Lollo on guitar, and Foxy Sagz on drums. Infectious new single “Banana” – their first since signing to Warner Music Sweden – is a relentless pop-punk earworm: think the Spice Girls by way of CSS, laced with the acerbic attitude of Peaches (“I drive Lamborghini ∕ to match my bikini... I throw my martini / right on your weenie”). A notable departure from their early scuzzed- up template, the track signals a progression from the out-and-out grunge that dominated previous releases, aligning Dolores Haze’s sound with their outspoken political views and even more outspoken wardrobes.

“‘Banana’ is a playful song with a statement: ‘We don’t want your dick pics,’” Sagz intones flatly. The song takes a relatable experience – women being pissed off at the influx of unwanted, unsolicited nudes in their DMs – and straps it to a beat that’s undeniably infectious. It’s girl power for the commodified feminist generation. “We just wanted the lyrics to be easy for everyone to understand,” continues the band’s freshly crop-haired drummer. “For them to be easy and catchy, so that the statement of the song (could stand out).” 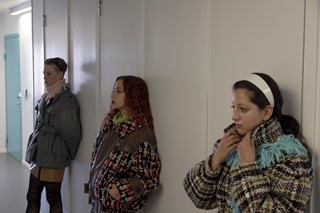 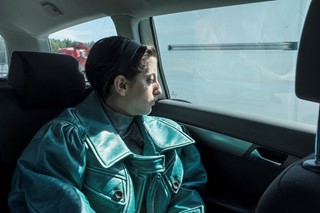 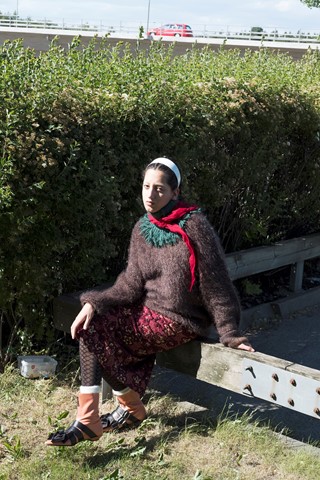 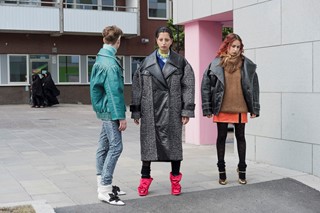 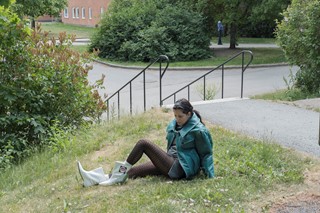 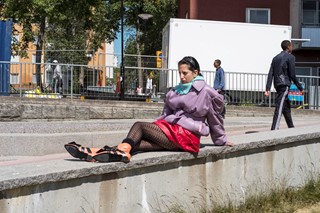 Hearing the trio explain their origin story, it’s not only their 1970s baby groupie-like nicknames that have history. Now coming out the other side of a two-year hiatus, the band originally found each other in 2012 in Stockholm, where the group’s remaining members are still based. “(Former member) Groovy Fuck formed the band with Nickz, and then they needed a drummer so they put up notes all over town saying ‘give us a call’, and I did. I was the only one calling, so... I was in!” Sagz recalls. Hearing that the band also needed a guitarist, Lollo took it upon herself to charm Nickz until the singer succumbed to letting her join.

Nickz is pleased she did. “We were lucky, because we didn’t really know anyone playing music,” she says. “We just took the first people that we met and were like, ‘Hey, join our band,’ and it turned out great!” This philosophy of taking things as they come is one that’s carried their project successfully so far. “I think it’s sad when people start to think too much about the whole ‘making music’ thing; they make it harder than it needs to be. We started with basically nothing. I hope we inspire people to get out there if they want to express themselves with music, because it’s fun.”

“I’ve always been into making music and writing songs, but there’s also a part of me that’s like, ‘I want to be famous’” — Foxy Sagz

For those who are curious as to why the band find themselves one member down, the answer might surprise you. “Groovy Fuck kind of quit the band to go help out on a farm and work with alpacas,” explains Lollo. It’s not uncommon for musicians to experience turmoil among members, but a band being split due to agricultural relocation is surely a one-off.

Meanwhile, Lollo and the rest of the band weren’t immune from their own quarter-life crises. While increasing numbers of us might react to pangs of unfulfilment by dramatically withdrawing from social media, making a career change, or chopping half our hair off and dying it a questionable colour, each member of Dolores Haze has a more unconventional tale to tell.

“I had a bit of a crisis too, resulting in me enrolling in Christian school,” says Lollo. “I started going to church and singing a bit of gospel.” Sagz, meanwhile, left on her own pilgrimage to Berlin to meet “really cute foxes”. So how did they all end up in the same room now, recording their upcoming album? “We were like, ‘Enough is enough,’” says Sagz. “I went to the burlesque club that Nickz worked in and dragged her out. Lucky was kicked out of her Christian school anyway, so we thought, ‘Why not make music again?’ It was a turning point.”

But musical ambition isn’t the only thing driving the group. “I’ve always been into making music and writing songs, but there’s also a part of me that’s like, ‘I want to be famous,’” declares Sagz. “I want people to recognise me – whatever it takes, you know?” Stating your intention to become as famous as imaginable, by any means necessary, is a bold move. But judging by their online presence, the band’s quest for superstardom does feel laced with the right dose of irony – their tongues seem firmly in their cheeks. “I’m so relieved the whole ‘guys with a band’ era is OVER... We’re the only cool band these days”, read two tweets from Dolores Haze’s feed, a sentiment that Lollo, who runs the group’s social media, is happy to expand on. “I think the worst kind of people are guys in bands. It’s boring that there are no cool bands any more, but I’m also very, very relieved to not have to deal with all of them.”

You can’t help but wonder if the band’s ambition might one day bring them overseas – would they consider a move to LA, the city their Sunset Strip names nod to? They aren’t ruling it out, but Stockholm will always be home. “I would never want to relocate for the rest of my life, but LA would be fun for a couple of years,” says Nicks. Sagz laughs, gently reminding her: “But don’t you remember you loved Stockholm so much you wanted to tattoo it?”

There’s no doubt Dolores Haze are stylised – from their adopted nicknames and personas, born from a desire to stand out on Instagram, to their promotional imagery and choice of clothing. The band say this self-consciousness is an extension of their creativity as musicians. “I remember in the beginning when it was a rock band, some people got mad and were like, ‘You guys care so much about your image, you don’t care at all about the music,’” says Nickz of the backlash to their image-heavy approach. “Because we liked to dress up and do our make-up, they thought that we didn’t care about how we sounded – like it was either/or.”

“Image is important and anybody who denies that is wrong, because it’s important in pop culture,” says Lollo. Their name might reference the idealised young girl controlled by men (it’s a nod to Nabokov’s novel Lolita), but Dolores Haze are using their appearance and audiovisual onslaughts to be totally in control. And they’re not afraid to take their cues from pop’s biggest names. “Thankfully, many big artists lead the way – I remember when Beyoncé released Lemonade, that album was really political, and it was super- accepted and everyone was praising it. We are (definitely) a political band.”

Dolores Haze’s new album is out on October 26