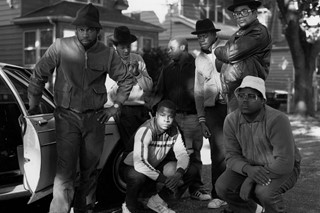 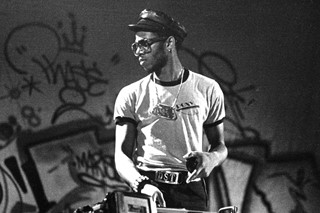 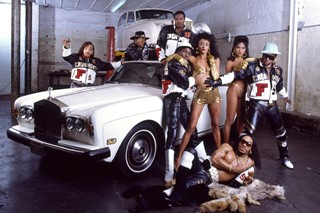 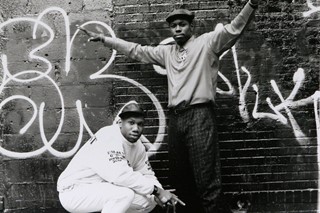 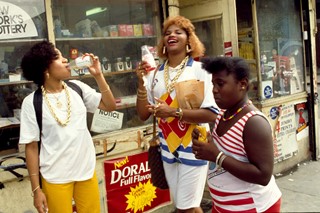 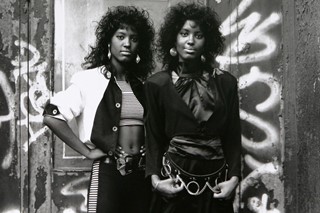 The thundering boom bap of hip hop’s golden age started just as the sweat and vitriol of the punk scene was dissipating in London. Both genres ignited a heady photographic history, but few can say they documented the rise of these movements as deeply as Janette Beckman.

London-born and New York-bred, Beckman’s innate interest in subversive characters led her to shoot the likes of Sid Vicious and The Clash for the hugely influential, now defunct music/culture magazines Melody Maker and The Face at punk’s peak. She then crossed the pond and captured a prolific catalogue of burgeoning hip hop legends. Long before they’d inked a record contract, Beckman snapped some of the earliest shots of LL Cool J, a young Queen Latifah, and Afrika Bambaataa. Her shot of EPMD, for the cover of the duo’s Unfinished Business, became a visual staple in hip hop history books. Beckman’s fascination with rebel culture, and her ability to disarm even the toughest subjects, allowed her to produce unguarded frames of East LA gang members (many of whom she’s still pen pals with), Harlem bikers, and illegal girl fights in Brownsville, New York City. She was even invited to rap over a beat for NWA – though she politely declined.

What makes Beckman such an incomparable photographer isn’t just her star-studded roster, but the fact that she’s a fan first and foremost. Behind jet black curls, gold jewellery, and a Dapper Dan jacket, she laughs, “People always ask ‘Did you know hip hop was gonna get this big?’ ‘Could you feel how important punk was?’ We didn’t know, and we didn’t care. I was photographing the culture because I was a fan. I was passionate about what I was photographing. I was a part of it, but I never thought that my photographs would be a document of that time.”

Beckman’s images are currently exhibiting at Beat Positive at London’s Getty Images Gallery, and in September she’ll release her book The MASH UP, featuring her hip hop photos remixed by iconic graffiti artists. She’s also contributed extensively to the Smithsonian Anthology of Hip Hop & Rap, out at the end of 2018. We stole a few minutes to hear the stories behind some of her favourite photos from rap’s earliest days.

Janette Beckman: The Face magazine commissioned me to photograph Run-DMC. They gave me Jam Master Jay’s home phone number, I called him, and we arranged to meet at the Hollis subway. He walked me down to the street where they lived and introduced me to Run, DMC, and their posse, who were hanging out. This was super early on in their careers and maybe the third shot I took that day. I’m not one to pose people, I never really have been. Strangely, when you’re taking pictures, you know when you’ve got the shot. You get this physical feeling that this is a good photograph. Run-DMC in Hollis  – I just knew it was a good picture when I was taking it. I could feel it.

Janette Beckman: I photographed the very first hip hop show in London at The Venue in Victoria back in 1982 for Melody Maker. The show was mind blowing. I was running around taking pictures of Fab Five Freddy, Afrika Bambaataa, Grandmixer DST, Futura, Dondi, and the Rock Steady Crew. I had no clue who any of them were at the time! Everybody was on stage, double-dutch dancers, b-boys, rappers, DJs, graffiti artists. It was wild, and I just immediately knew it was for me. It was so different from anything else that was going on in the UK, but at the same time had that chaotic and spontaneous feel I’d witnessed from early punk.

Janette Beckman: When I first got to New York, Grandmaster Flash’s ‘The Message’ had just come out. I was living on the Lower East Side and there were ‘roaches in the back, junkies in the alley with a baseball bat!’ The song had that strong resonance. Trains covered in graffiti, music pumping out car windows. It was all around you, and I was so into it! I took this photograph for the cover of Grandmaster Flash & the Furious Five’s album Gold. They wanted to shoot in a Rolls Royce showroom. We had a crate of Moët and two bikini-clad models.

Janette Beckman: They would say, ‘I want you to go the Bronx and photograph something,’ but I had no clue what the Bronx was or what it looked like. I just jumped on the train and went. It was great being a female photographer back then, and especially being British. When I photographed BDP, I was probably the first British person they’d ever met! There weren’t many Europeans hanging out in the Bronx, so they were as interested in what I was doing as much I was interested in them.

Janette Beckman: The first time I met Salt-N-Pepa, they didn’t even have a record out. I photographed them for a British teen magazine and we had a great day taking photos in Alphabet City. They were working on their first record at the time and they asked me if I would shoot the cover. This turned out to be the beginning of many covers I’d shoot for them.

Janette Beckman: Double Destiny were twins and a rap duo from the Bronx, managed by Vito Bruno. He’d brought all his artists to my studio for a group photo shoot.The whole scene was small and very DIY. A lot of the times (like Salt-N-Pepa) you had a bunch of friends who just started messing around and writing rhymes – suddenly, they’re in a rap group. The big labels weren’t signing hip hop, so they’d send their cassettes to Tommy Boy, Def Jam, (or) Sleeping Bag, who were also tiny labels back then, and chances were, if you could write and you could rap, you could probably get a record contract.

Janette Beckman: When I photographed Roxanne Shanté, she was only 14. She wrote a diss track called ‘Roxanne’s Revenge’, which was an answer to UTFO’s song ‘Roxanne, Roxanne’. The song was a huge hit. They had to take her out of school because she was getting too much attention. She was so young, yet she had this huge personality and confidence. Suddenly you had female artists like Queen Latifah and Salt-N-Pepa putting out records like ‘Let’s Talk About Sex’. They were really tough.

Janette Beckman: When Slick Rick showed up in the studio, he was wearing a Kangol and a suit with short trousers and a skinny tie. It reminded me of the really sharp style of West Indian kids that I would see on the streets in Brixton and Streatham when I lived there. It was almost a 60s mod look, and I just totally got it.

Janette Beckman: This was my third record cover for EPMD. They picked the spot and told me, ‘Go down this road, you’re going to hit the water, and we will be there at noon’ to shoot them for the cover of Unfinished Business. It was winter and the sun would set early. Around four in the afternoon, I began to worry – they hadn’t turned up. This was a time before cellphones, so I drove and found a phone booth and called the label, who said, ‘Oh yeah, they’re in the Bronx getting their rims polished.’ The sun was starting to go down when I heard the roar of the V8 engines coming down the road. They pull up, and I knew we had 20 minutes to get the cover shot. They got out and just sat on the hoods, just like that. I looked at them, and I looked at what they were wearing, I had my camera all loaded up and I was like, ‘Wow, this is great!’

Janette Beckman: You have to bear in mind, when I photographed many of these artists, they were not famous. These were young aspiring kids, they weren’t practiced musicians wanting to be in Led Zeppelin or anything. We never had stylists, or hair and make-up people. Rappers just came to the shoot dressed in what they wore and I’d take their picture. This was LL’s first press shoot for Def Jam. He was probably 17 years old when he walked into my studio carrying this huge boombox.

Janette Beckman: When I went over to New York in the beginning, I’d photographed all these punks. I had pictures of The Clash, the Sex Pistols, Debbie Harry, and numerous album covers. I thought I would walk into the record companies and get loads of work, that it would be easy. But the art directors didn’t like my street style images. They told me, ‘We can’t use you! Your pictures are too raw.’ They were more into that perfect airbrushed look, and my images were too gritty. But I don’t work like that.

Janette Beckman: I loved A Tribe Called Quest, their afrocentric style, and their cool lyrics. We shot this in Chelsea with their little cousin in the photo. When I started photographing hip hop, it was about people expressing what they thought, kids just writing about their lives. These days, the music industry is more about making money. It’s a different motivation. Artists want the lifestyle that comes with fame. They think they can make a record and become Jay-Z tomorrow. I preferred the authentic, raw, street hip hop. I’ve never been interested in the people doing things for the money.

Janette Beckman: The first time I photographed Public Enemy, It Takes a Nation of Millions to Hold Us Back had just come out. There was a lot of controversy surrounding the album’s politically charged lyricism. People said, ‘It’s gonna be hard to get the shot, they won’t want to work with you.’ Def Jam PR Bill Adler brought them to my studio and they were the nicest guys! Incredible to photograph. I have so much respect for Chuck D. I just did a collaboration with graffiti artist Shepard Fairey who reinterpreted my Chuck D portrait from this shoot.