‘All I know is where the fuck I came from. And I don’t wanna go back’ 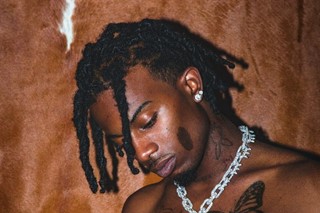 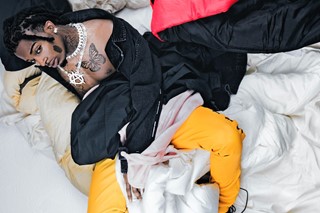 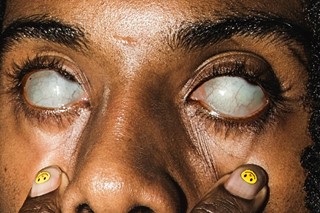 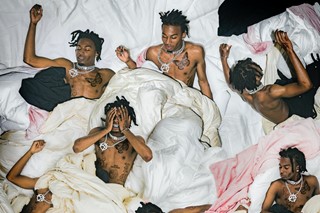 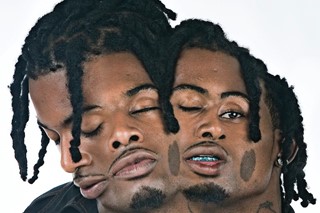 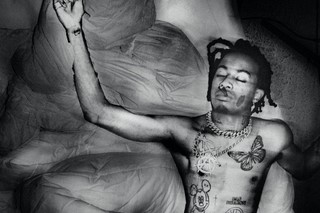 Lot of musicians appreciate nice clothes. Playboi Carti loves them, truly, madly, deeply. He shows up to the photoshoot with several suitcases of his own treasured pieces. Everything comes with a story. A patchwork brown leather jacket? Custom VLONE, he assures me. So are a pair of yellow trousers, which once belonged to Lil Peep (he wears them in tribute to the late artist’s “rebellious” energy). He takes special pride in his Italian-made jewellery, gushing over the subtle craftsmanship of his many-faceted rings the way some people talk about beloved pets. At one point, he asks to see my jacket; immediately recognising the make and model, he rushes over to a friend in his crew, jacket in hand, demanding, “Bro, why don’t I have this yet?!”

This infectious enthusiasm for texture and colour comes through on his sophomore album Die Lit, released last month on Interscope Records. The release distills his creative impulses to their purest form: impressionist ad-libs splattered over a canvas of springy production from longtime collaborator Pi’erre Bourne. At first glance it sounds messy, even unfinished. But take a step back and a compelling pop landscape reveals itself.

One reason it’s so compelling is that Carti’s appreciation for the finer things carries real pathos. He grew up in Atlanta without them, shopping at thrift stores and working at an H&M before leaving to seek his fortune in New York. “All I know is where the fuck I came from,” he tells me, “And I don’t wanna go back.”

We met to discuss Carti’s old friends, his new punk phase, and a clarification of one eyebrow-raising line from the record.

I feel like you’re into this punk phase right now, tell me about that.

Who else feels like a punk icon to you?

Playboi Carti: Me talking about the legends... everybody can do that. I feel like right now, it’s just me and who I surround myself with and how we just compare our similarities to back then. For instance, my best friend Uzi, I hang out with him 24/7. We’re so against listening to the rules but it’s not harming anyone anymore, it’s more like, “Oh, we’re going to do this and this (claps)”. It’s like the shit that we do, that be our legendary moments. We don’t know exactly how it used to go down back then, but we are ourselves, we’re just modern-day rockstars.

Why do you think you and Uzi vibe so well?

You’ve got an anarchy tattoo. What do you feel like you’re rebelling against?

Playboi Carti: I feel like in this world that we live in, people don’t know what you’re doing until you do it. You know what I’m saying? If you just express yourself more, everybody else will follow. That’s what I’m trying to do.

Did you feel a lot of pressure on you to do things you didn’t want to do after you first blew up?

Playboi Carti: Yeah, I be nervous a lot, you know what I’m saying? I’m human so like...as I grow I just realised there’s some kids out there who really need me, so that’s my push right there.

What do you get nervous about?

Playboi Carti: I get nervous about everything, you want everything to be right. Especially with something like [performing] to thousands of people, I don’t know why you wouldn’t feel nervous at first.

One thing I appreciate about your album is that it seems like you didn’t respond to pressure to change up your sound. You just kept doing at what felt natural to you.

Playboi Carti: I try to not to become inspired too much, because that can throw you off. And that’s really what it is. You always got to remember how you got here. I go back to Atlanta and I make my album. And then I go to L.A. and Miami, but Atlanta’s where it is. I wanted to get out [of Atlanta] when I first got in the game; (now) I want that same feeling every time. I’m in the studio, white tee on, no jewellery, I’m at home.

When you’re working with Pi’erre Bourne, does he send you a ton of beats, or is it more of a collaborative process in the studio?

Playboi Carti: Man, I’m with him every day. So, when we’re in the studio together, Pi’erre makes a hundred beats a day. They all fire. He’s doing that constantly. So, when I go to studio with him, I’m trying to get at least five, six tracks done. He might hop on two of them. It’s the same way with me and Uzi. With me and Pi’erre it’s even crazier because it’s like, it’s just like madness. I be in the booth recording and he just be standing there. And vice versa. In the booth, not talking about anything, in the booth. We work better together because we have each other. Pi’erre, he’s a boss. We all bosses. Bosses move like bosses. We just mob ties when we get together. I love him, bro.

When you first started out, you were co-signed and mentored by a lot of powerful figures, like ASAP Rocky. A few years later, there’s all sorts of younger artists who seem totally inspired by you. Do you see yourself as an OG figure to this new generation, or are you separate from that?

I love this line, "I bought my mom a crib off of mumble rap". Was that something you felt like you needed to say?

Playboi Carti: It was more like, not even needing to say it. It was so easy to say it because it was facts. When stuff is just true, so true, you just think about it, it comes out naturally. “RIP” was a freestyle and I’m just going in. When that beat dropped I felt that. Facts. Everybody really liked that part, especially people that really know me, they’re like, “Yeah, that’s your shit.” My mom, she’s so excited. I’ve just been thinking about my family and shit, and just like everything, bro. I’ve been thinking about life. I’ve been thinking about 10 years from now.

What do you see for yourself in 10 years?

Playboi Carti: Just being rich as fuck and being able to take care of my me and mines. Keeping this shit alive. Die lit!

“R.I.P. Fredo” is a really emotional song – what was your relationship with Fredo (Santana, who died of a seizure in 2018) like?

Playboi Carti: That was my brother from another mother. When I was with Rocky, I was with Fredo. Matter of fact, I lived with Fredo and I would leave Fredo’s house to go see Rocky. And all that was just Yams. I used to follow Yams if there was something to see. Fredo was very supportive of me from the jump. I can’t lie, I miss him so much. He was so supportive, one of the nicest people I ever met in my life. He’s a savage. Don’t get me wrong. But he really took me in. People don’t do that. You don’t meet people like that. The last time I saw him, he was telling me how proud he was of me, and I just was like ‘Thank you bro, I gotchu.’ Fredo and I got some shit. When we go somewhere, he’s got money in his pocket. He didn’t want nobody paying for nothing. He wouldn’t let you pay for shit. Boss. Real boss. Self-made boss, no manager. He was his own manager, his own booking agent, his own travel agent, and he got six niggas on his label.

“The last time I saw him, he was telling me how proud he was of me” – Playboi Carti on Fredo Santana

I feel like around 2013, 2014 when your style was coming together, there weren’t so many people rapping the type of synth-heavy production you’ve popularised...is that something you got from Ethereal?

Playboi Carti: Shoutout to Ethereal. When I met him, I was looking for shit that he was already doing. I was like wow. This is the guy. Ethereal is a legend...without him, I don’t know where the fuck I’d be. He’s a good dude. So talented. He’s another GOAT. I’m not even talking about his music right now. As a human, that man is a really good dude. He took me in when I was skipping school. Took me on the road, started going crazy. My senior year of highschool, he and Father and Key! started going crazy, making all these tracks.

You have this line on “RIP” where it seems like you say “Watch me sock your bitch. Watch me thrash that bitch.” Obviously, there’s a lot of conversation right now about violence against women in rap. Is that line supposed to be a provocative thing?

“Watch me sock your bitch. Watch me thrash that bitch.” That’s what I heard, and what I read on Genius, which could be wrong.

Playboi Carti: Yeah. Genius might have it wrong, but I most definitely said “Watch me smash that bitch.” Smash means having sex. Just having sex in an aggressive way. I’m definitely not with that hitting women, none of that bro. That’s crazy. I’m most definitely talking about having sex. I’ve been using the word smash since Ethereal. Atlanta lingo. “Thrash,” it’s like what does thrash mean? You skate? Thrash, having sex. I don’t know if that means something else... smash is sex.

Tell me about your style – do you have specific influences or is it all just instinct?

Playboi Carti: Instinct, bro. I definitely have icons, but what happens when you overdo that? You know what I’m saying. The drip is in you. Be yourself. It’s in you. Don’t overdo the drip. It’s embarrassing. Be yourself. I look at shit like when I’m in New York, bro there’s so much going on here, the amount of stuff you get off people. Everything affects it. Everything that’s going on in the world today. How I feel this week. The weather. All that affects my fashion. I’m feeling good, I might wear some dazzley shit.