A few days after meeting Girl Pusher for the first time, I brave rush-hour traffic to drive two hours to catch the band play in Santa Ana, California, deep in the heart of the strip-mall metropolis of Orange County. Orange County is a weird place, where subcultures and weirdness thrive thanks to its relative obscurity.

The show ends abruptly when Hine says, “We’re done – my computer died,” and the duo walk off stage. A sense of relief pulses through the crowd. The demon has been exorcised.

Meeting in the al fresco sidewalk seats of Hollywood a few days prior, Giuliano shows off her battle wounds – the result of slamming the microphone into her head, among other things.

How 2manydjs made their mash-up masterpiece As Heard on Radio Soulwax Pt. 2As the landmark DJ mix compilation arrives on streaming platforms to mark its 20th anniversary, Dazed speaks to 2manydjs’ David and Stephen Dewaele, Erol Alkan, Peaches, and more
Girl Pusher - spring 20187 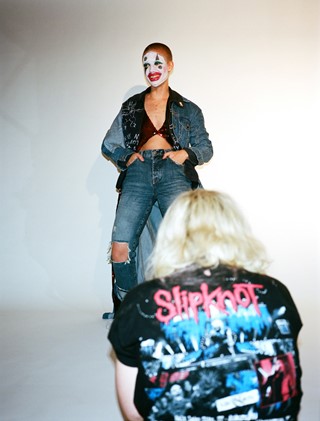 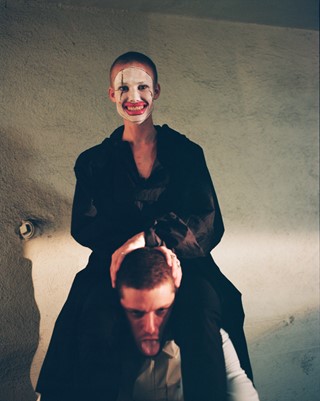 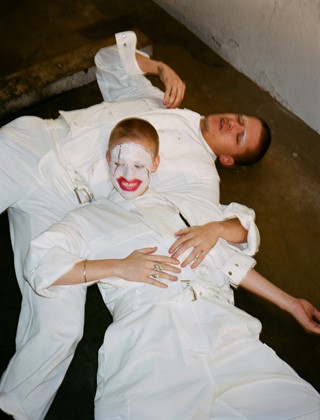 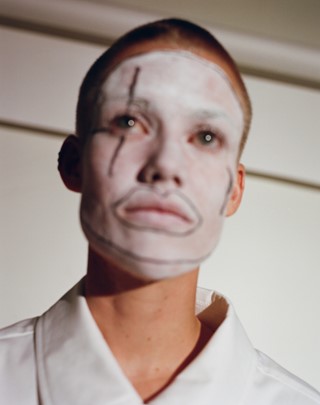 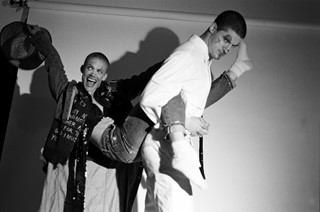 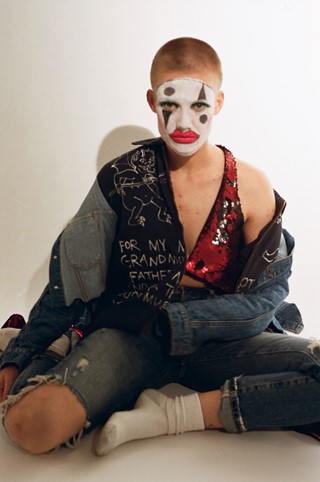 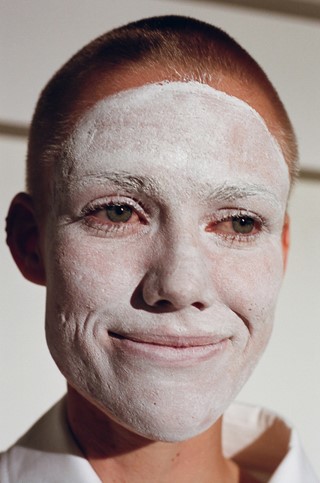 “My scalp isn’t really on my head any more,” she grins. “Look at Jarrod’s hands!” (Hine’s hands are blistered from playing a previous show.) They both talk about entering a sort of fugue state when they play live, which makes sense. The Girl Pusher sound is both primal and digital, ominous and throbbing. Hine, who is from the OC and still lives there, creates beats and patches from sampled 911 calls and “the Marcy tapes”, a trauma-filled 1967 recording of a teen hippy runaway. Giuliano, somewhat surprisingly, was a junior racecar driver and track-and-field star while growing up in Bakersfield, California. Sing-screaming the band’s songs into an iPhone, her shaved head, sharp features and frenetic patter call to mind a spunkier Fairuza Balk.

Gabby Giuliano and Jarrod Hine, the duo that make up Girl Pusher, rip through the set. Giuliano is in a red jumpsuit, her face painted like a clown. Sometimes, they remind me of The Slits or X-Ray Spex; other times, it’s the Boredoms and Salem. They’re chaotic and industrial and techno-y and raw, and Giuliano spends much of her time writhing around or rocking back and forth in some hypnotic state. Each Hine beat is a heartbeat; each Giuliano scream is a purge.

“You scare the shit out of me, but I think I like it!” someone shouts from the all-ages emo-rap crowd.

“With beats, I focus on an angry sound,” says Hine. “Or, like, sad, negative feelings.” He is quiet, unassuming – a kind of stereotypical drummer-beatmaker – and lets Giuliano steer the conversation.

The band has venom, but it comes honestly. Girl Pusher’s story began on New Year’s Eve in 2015, right after Giuliano says she survived a horrific, traumatic episode that left her feeling wretched and angry. Not in the mood to leave her house, she closed out the year by expressing her anger through song. She asked Hine to send her some beats, and spent the night recording vocals. The lyrics poured out of her – about the traumatic experience, and her own doubts and fears about what happened.

They put out their debut, the JAN.1 EP, the next day. It began a cycle of rage, release, relief, repeat that Girl Pusher have been riding ever since. Whatever had been welling up inside Giuliano burst out in songs like “A Lot of Boys Like Me Though” (from 2016’s Don’t Die EP), an incredibly intense bucket of confrontational lyrics screamed over digital wreckage.

“When something (traumatic) happens you question your entire existence,” says Giuliano. “It almost feels like an out-of-body experience, because you just don’t even feel like yourself any more. You find any reason to hate yourself even though it’s not valid, and so I scream (on the song), ‘I’m so fat / I’m so ugly… I’m so hideous / I hide myself.’ I know none of that is true but that’s how it feels. I don’t know; it’s really fucked up.”

Despite all of this, the negativity and the pain, a hopefulness shines through in Girl Pusher’s music. What is cathartic for Giuliano and Hine has the same powerful effect on their audience. What might sound like antipathy to some acts as a rallying cry for others, or else just makes them feel less alone. The band describe the kids they speak to at shows: sometimes they are crying, other times they offer a hug. It sounds a little bit like group therapy. “It’s really corny, but yeah, we’re in a dark place and this is our catharsis,” says Giuliano.

Girl Pusher are at work on a new EP, which they plan to put out with no pre-release promo, no hype, and definitely no managers. “If some kid wants us to play in LA, we’ll play in LA,” says Hine. “We’ve been flown to New York twice by kids under the age of 20. They got us our plane tickets so we could play there. What do I need a manager for? We’ve got some crazy fans.”

London-based fashion designer Claire Barrow first came across the band at one of their rowdier shows in Los Angeles last year. “I feel like they are making something that we all really want to hear,” she says. “Something that’s new, not too nostalgic, experimental, but relatable as well.” Barrow was particularly taken with Giuliano’s presence, and asked her to model some jewellery a month later. In September, she invited the band to play a showcase with Brooke Candy at H Lorenzo, a fashion store in West Hollywood.

Even in that setting, Girl Pusher are the perfect all-ages band. Despite the inherent violence (apparently, Giuliano bled a lot that night), the band aim to create a safe space for all – a place where you can be a freak and not feel fucked up about it. “That shit is important to us,” says Giuliano. “Be yourself and feel safe. Tell us if we’re playing with your abuser or rapist because we will drop that shit. Faster than anything. We have before, and we’ll do it again. No remorse. Two, if you’re uncomfortable about something and just need to be honest and vulnerable with us, thank you. You don’t owe shit to me. Someone called Jarrod (on the radio show he hosts on KXLU, Loyola Marymount University’s station) and was like, ‘I’m a crossdresser. Is it OK if I come?’”

Barrow thinks this inclusivity makes Girl Pusher a paradox: an affirmative influence, despite the ruthlessly dark sound. “At the show you had Gabby smashing her head with the mic, blood dripping down her clown make-up on to the floor, Brooke Candy rapping with her boobs out, ‘fashion’ people and teenagers drinking spirits out of soda bottles they snuck in,” she recalls. “We were meant to do it in the car park but the council refused permission after checking out the band on YouTube. I can see why people stopped to stare through the windows. There was this elderly couple watching, expressionless. It’s not what you’d expect to see on North Robertson Boulevard, West Hollywood.”

Girl Pusher’s new EP is out in the spring