Jamie Hewett has spent the past 25 years stretching his talent in every possible direction. Though he’s best known as the artist who co-created Gorillaz with Blur’s Damon Albarn, he got his start with the bristling anarcho-punk comic Tank Girl in the late 80s and has long lamented the death of England’s comic industry. But from spearheading the world’s most famous animated band to developing a musical with Albarn to documenting the impact of climate change for Oxfam, Hewlett has shown the consistent ability to adapt.

Hewlett’s storied and unconventional career began at university where he was just trying to craft a fresh, exciting female character that he felt other artists couldn’t even fathom. “There wasn’t really a place for adult comics,” he says of his start as an art student in Worthing, West Sussex. “But at that time, we were just trying to be outrageous and we were trying to tell these stories through this female character because I think, at that point, there weren’t any female comic characters that were very interesting or very strong, and a lot of them seemed to be drawn by men who probably never even had a conversation with a woman.”

Initially published in the comic magazine Deadline, Tank Girl was the incendiary, caustically humorous story of Rebecca Buck set in post-apocalyptic Australia. Drawn by Hewlett and written by his friend and college classmate Alan Martin, the comic was loud, gory, and undeniably unique. It developed a large following and was even turned into a feature film (albeit one that grossed just $6 million against a $25 million budget). Hewlett left the series in 1995, though he contributed to the 21st Century Tank Girl collection in 2015. 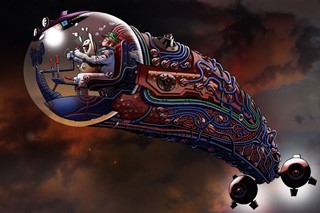 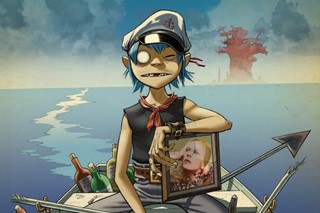 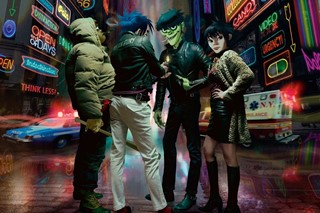 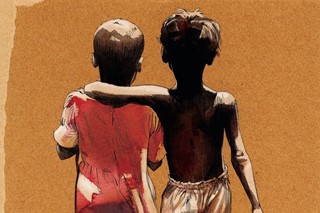 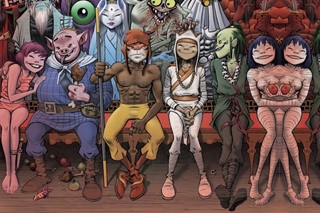 The success of Tank Girl kicked off a singular, eclectic career, and now Hewlett finally has the sprawling anthology he deserves in the form of a new Taschen monograph. Initially out at the end of 2017 and now being re-released in a second edition, the massive collection includes Hewlett’s best known work across mediums, as well as shorter pieces and under-the-radar projects that reveal new insight into the mind of one of England’s most influential contemporary artists.

Tank Girl makes up a large section of the book and encapsulates both his university days and his frustration with the mainstream comic industry at large. The raucous series also illustrates bizarre double standards in the comic world that led him to nix a stint working at DC Comics during the period before he and Albarn conceived of Gorillaz. For Hewlett, any lewdness in Tank Girl was meant to expose the perverse nature of the medium as it was so often used by other artists.

“We went in to (Tank Girl wanting to) push the limits a little bit with that character and just be a little outrageous and say stuff that nobody said and nobody talked about and use words that nobody was allowed to use in comic books and try to get over this sort of pathetic censorship,” he explains of his work on Tank Girl with writer Martin. “You can’t show a nipple, but you can show someone being stabbed to death or this other bullshit that we still have.”

One major change between the first edition of Hewlett’s book and the second is the cover, which went from a kind of class photo of his creations to a striking image from his Female Freedom Fighters series, a planned exhibition featuring fictitious women revolutionaries that Hewlett started but did not finish. He has expressed a preference for crafting female characters, and had initially planned to do a full series of fictitious women heroes for an exhibition. He also says quite simply that after spending two-and-a-half years putting the book together, the initial cover was a last second scramble and one that he was never pleased with.

“I delivered it literally an hour before it went to print, and I didn’t like it, but I couldn’t change it at that point,” Hewlett says. “And then the book went on sale and it sold out in six days, so I jumped straight in and said, ‘Look, if we’re going to do a second edition I want to – I insist on doing a different cover.’ And I chose the Female Freedom Fighter because it was very strong and I liked that image.”

The book also dives extensively into Hewlett’s work with Albarn on Gorillaz, the virtual band turned global sensation who managed to become the kind of legacy act young artists gravitate towards rather than evade. Their last record, Humanz, featured Vince Staples, Kelela, Kali Uchis, and more rising stars. From early sketches of the “Dirty Harry” video, to an illustration from the scrapped Gorillaz movie Celebrity Harvest (which Hewlett once said was “going to be a very dark film, perhaps with cannibals and zombies”) to a slew of memorable one-off pieces, 2-D, Murdoc, Russel Hobbs, and Noodle are deservingly prominent players in Hewett’s monograph, and ones that the artist thinks are perhaps more needed now than ever.

“18 years ago we started Gorillaz, and they seem to be more relevant today than they were when we first met them, for some reason,” Hewlett says. “And I think that might have something to do with the fact that people are tired of celebrities, because we live in a society where everyone’s a fucking celebrity, and usually they’re a celebrity for doing nothing and so it’s easy to really dislike real celebrities, whereas I think there are things about cartoon characters that are timeless and endearing.”

Lately, the Gorillaz resurgence has been his primary focus. The band embarked on a sprawling tour following their first album in seven years and still have upcoming dates in Europe and Latin America. He describes the Gorillaz process as a bit of a “conveyor treadmill,” and it doesn’t seem likely that will change anytime soon with plenty on the horizon. Hewlett and Albarn are at work on new Gorillaz material, with plans to release a follow-up album to Humanz in 2018.

While his art for the foreseeable future will be Gorillaz-centric, works like Tank Girl and the Female Freedom Fighters series feel fresh and uniquely suited for 2018’s political climate, although Hewlett eschews the idea of being a political artist. Still, reading through his entire monograph does illustrate both his artistic and ideological maturation. The Mad Max-ian Tank Girl seems worlds away from the serenity of his series of detailed pine tree illustrations from southern France, Pines, or the haunting, yet optimistic illustrations he did to document the climate change in Bangladesh. Hewlett says that given the constant pace of his workflow, he rarely has time to comb back through his catalogue, though whenever he does so it’s an eye-opening experience, just as reading his monograph will be for diehards and the uninitiated alike.

“I am in that position where I finish something, it goes out, and I’m onto the next thing,” he says. “I finish it, it goes out, onto the next thing. And so, sometimes you have a shock when you see it printed. You go, ‘Oh fuck, it’s terrible.’ Or, ‘Why did I not see that when I was finishing it?’ And then sometimes you have a surprise and you discover something from 10 years ago. You go, ‘Wow, what headspace was I in when I did that? That’s really good.’ So, that’s something that worries me, kind of a fear I have that I don’t really know what I did. I’m not sure, is this good or is this terrible?”