Flexing is a bone-bending dance that originated in New York City neighbourhoods – now, along with its counterpart Flex Dance Music, it’s becoming an international phenomenon

Hitmakerchinx is walking me through the mind-bending art of ‘flexing’ via a video call from his home in Los Angeles. “Check this out,” he says, twisting his arm behind his head into an inconceivable contortion. Every sinew is straining. “I’ll go like this: ‘Boom. Boom. Boom.’ Then I’ll throw some sauce on it.” He unfolds his arm in one fluid, graceful motion. Ballet-like, he’s relaxed again. “The foundation is simple dancehall dances – after you get that in your body, it’s just putting your own sauce on it. You can’t learn this style unless your life is embedded in it.”

Chinx is a world-renowned flex dancer and pioneer of flex dance music (FDM). As one of the most prominent artists pushing FDM today, Chinx is well-positioned to guide us through the genre’s history. Like many artists in the flex world, he’s both a dancer and a producer, creating sounds based off his instinctive physical understanding of the music. Previously known as ‘flex tunes’, FDM has its roots deep in reggae and Jamaican dancehall and has, since the early 2000s, developed organically alongside the dance form. Evolving from an earlier technique of simply blending and mixing dancehall tunes with sound effects, FDM has blossomed into its own genre with its own style of beats, artists cannibalising obscure samples, and rattling club-ready drums.

In the early 1990s, the grandfather of flex – a Kingston legend named Bruk Up – developed a unique style of reggae dancing, with his disjointed ‘broken’ movements and facial animations laying the groundwork for flexing today. After emigrating to Brooklyn in 1995, Bruk Up’s unique dance style spread across New York City, where OG dance teams like the Bed-Stuy Veterans merged it with their own style. Soon, the dance came to be called ‘brukup’, spreading through local parties and dancehall dances at a time when Brooklyn’s streets were booming with reggae tracks like Red Rat’s 1997 hit “Tight Up Skirt”. Before long it had migrated onto television screens via the hugely important local access show Flex N Brooklyn, which built a cult following in the community.

As brukup developed into the early form of flexing, Flex N Brooklyn became a weekly Friday night exposé for Brooklyn dancers. Among the most well-known of the dancers was Reggie ‘Regg Roc’ Gray, who, with his Hyperactive team were present from flex’s very beginnings. Not only that, he also invented ‘pausing’, one of the core moves seen in flex today. Other signature moves include ‘bonebreaking’, ‘get low’, ‘hat tricks’, ‘gliding’, ‘connecting’ and, occasionally, ‘punchlines’. “I got inspiration from a VCR,” Regg recalls. “I was watching myself back on a video. As I pressed play and pause I saw myself glitching on the TV screen.” At this point, the music was made of pure reggae riddims blending into long backing tracks underscored by the “Volume Riddim”, the essential instrumental which blends every single song together thanks to its pounding beat. Gradually it matured into shorter instrumentals, but it remained as backing tracks for dancers’ increasingly wild performances. “Those DJs were just chopping beats and making sound effects for routines,” Chinx explains. “They weren’t making real names for themselves.” It wasn’t until a new wave of DJs, personally affiliated with the dance teams, arrived on the scene that they started to be recognised in their own right.

Of this second wave, the most-revered name is DJ Aaron ‘The Mix King’. As with many others, Aaron’s introduction to flex was through Flex N Brooklyn. Born and bred in Brooklyn, Aaron started off as a dancer. In 2003, at just 13, he formed the Next Level Squad, and two years later he began creating his own music. Previously characterised by a downbeat vibe, flex riddims had picked up with heavy, double beats. Aaron exploded onto the scene, developing a unique sound that blended riddims and incorporating whatever samples sounded good to him – everything from deep Indian cuts to Madonna and Evanescence tracks were sounds that could be magpied. At the same time as honing his musical craft, Aaron was dancing, and later made mixes for his team to perform to. And as the new sound of the latest flex tunes progeny was noticed by other teams looking for mixes, it spread. By 2005, the dance would be christened with its official name, flexing, taken from the TV show. “The kids were saying, ‘You’re the flexing guys!’” Regg laughs. “We didn’t know what it was. But the kids were calling it flexing so we were like, ‘Well, I guess flexing is the name!’” 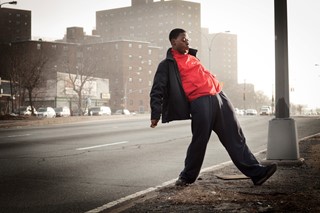 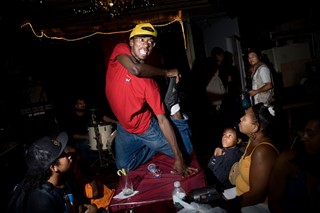 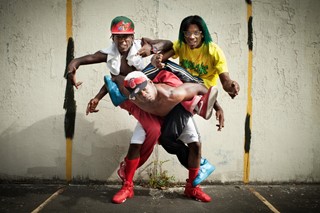 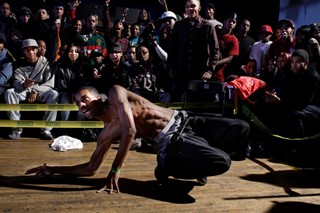 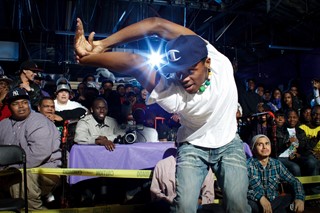 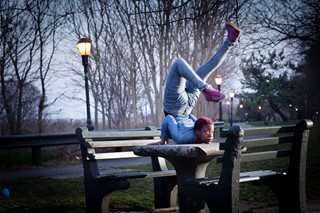 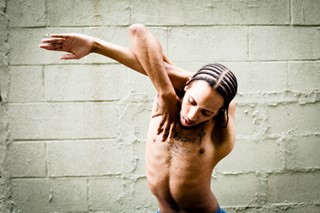 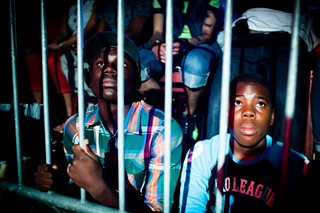 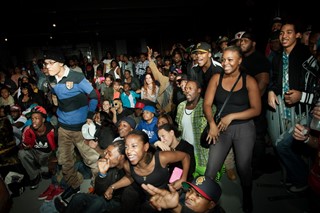 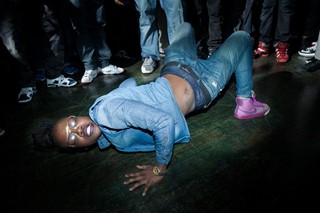 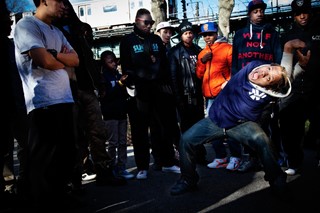 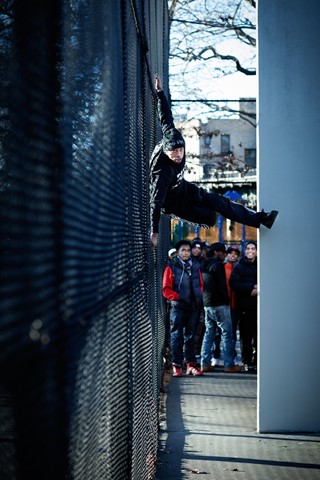 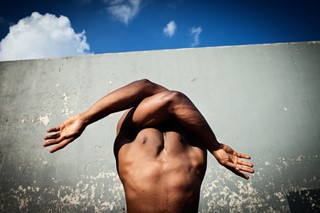 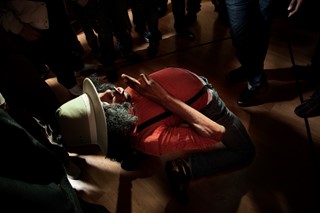 Just as flex tunes were starting to take off, Flex N Brooklyn came to an end. Without a platform, many dancers stopped and parties dropped in both regularity and number. For DJs like Aaron, there seemed to be no other outlet for the music – until two developments came along. Out of the ashes of Flex N Brooklyn came Regg’s Flex House, a dance session he held in his home for local kids, and Kareem Baptiste’s Battlefest. Both were vital for keeping the culture’s ­lifeblood pumping. Dancers were flexing again, and they needed mixes from pros like Aaron. In 2007, DJ Flava, an old school flex head, released the “first ever official flex tunes mixtape”, putting the genre on the map outside of its immediate locality.

“When you hear a flex tune, it’s different from any other music. It gives you that energy... you get creative out of nowhere” – DJ Aaron ‘The Mix King’

And the sound kept moving with Chinx’s arrival in 2009. Producing hip hop since 2003, he was introduced to dance by the infamous Bed-Stuy Veterans around 2004/05. “I was seeing them dance, and I was like ‘I can’t help it. Now I gotta dance,’” he grins. But Chinx wasn’t interested in making flex tunes. “I didn’t really care for the music at first – to me it sounded like noise, not music, because it went from reggae to so many chops – all this extra stuff.” It wasn’t until he heard DJ Flava’s mix of Rihanna’s “Cry” that he changed his mind. “When I heard that shit, I was like ‘Yo, this sounds insane. What is this?’ Damn, I just started dancing to the music.” After a while, Chinx was encouraged to start creating flex tunes himself. Unlike those before, he was building tunes from square one. His production was clean, underscored by heavy bass combined with the genre’s distinct West Indian flavour – innate to Chinx’s own Brooklyn-Guyanese heritage. His music transformed flex almost immediately; everyone wanted it. Aaron recalls hearing Chinx for the first time. “It was dope – he used to put beats and kicks with it. When he played, you’d be bopping your head.” Chinx credits all-night music-making sessions with dancers as essential to his multi-layered musical identity: emotional, storytelling sounds layered with noise for parties and battles.

Around 2014, Chinx’s music started to spread thanks to a crisp, drum-heavy tune called “Earthquake”. The track was used on the soundtrack for the fifth Step Up film,, where Fade to Mind-affiliated DJ Total Freedom discovered it. He hit Chinx up and booked him for his first DJ gig. “He told me he had DJ’d ‘Earthquake’ inside a club in Korea,” Chinx recalls. “I was like, ‘Word? That’s kinda big. They doing dance battles out there?’ He was like, ‘Nah, they’re just having fun.” For Chinx, who had always envisioned flex tunes going further, it was the affirmation he needed. Now he was being booked regularly, playing with Venus X and GHE20G0TH1K in Brooklyn. At the same time, Aaron turned his hand to FDM in 2015. “Nobody knows this, it’s a Dazed exclusive,” he laughs. “The first FDM track I put out was the ‘Street Fighter Tune’. When people heard it they was like, ‘Yeahhh!’ From there I knew what people would like. That was me crossing over to FDM.”

“(Total Freedom) told me he had DJ’d ‘Earthquake’ inside a club in Korea. I was like, ‘Word? That’s kinda big’” – Hitmakerchinx

This was the time the pair officially coined the ‘FDM’ name, which was already being floated by Chinx. “People were starting to ask what are flex tunes? So I was like, ‘Alright, if pop music has EDM then reggae needs FDM.” Then Chinx moved to LA where dancing became his life. It was here that he and his team joined Rihanna’s 2016 ANTI world tour after “dancing our asses off” at the auditions. Rihanna was so into Chinx’s work, that she gave him her music to remix and dance to on the ANTI stage in massive sell-out arenas. Inspired by what he’d seen on tour, Chinx knew he had to take FDM to the masses.

Today, FDM is the most visible it’s ever been. In Brooklyn it’s undoubtedly healthy, but it’s also transcending boundaries. Flexing itself has changed, evolving from basic movements to more complex, storytelling bodywork and illusions. The dancers are recognised as artists – Aaron has just wrapped a Hilfiger ad and Regg is touring flex round the world, while producers like Uninamise and Epic B, both widely respected as skilled FDM artists, are developing a global following. The music is seeping into other parts of club culture internationally, too. Bok Bok, co-founder of UK-based label Night Slugs, is a huge fan, and says he’s already taken influence from it. “For them it’s about performance, but we’re hearing it as music to rave to,” he explains. “When you play it in parties here, people dance to it like it’s bashment. That’s a new context.” This week sees Hitmakerchinx plays his London debut, while Night Slugs and Fade to Mind are co-releasing his album Shades & Monsters.

And what do the OGs think of FDM? “I love it,” Regg declares. “It’s a lot more musical. The FDM guys are letting people know there’s a culture.”

The longer Aaron and Chinx talk about flexing, the more excited they become. From seated and matter of fact, they’re now standing, demonstrating moves, unable to suppress smiles. Talking about the progression of his music, Chinx ties it to dancing. As he creates tracks and dances to them, he gets bored and makes more. “It’s like, ‘This shit sounds even crazier than the last,’” he says. “The more music I make, the better I get at dancing. It’s weird – it’s like a high; a drug.” After hearing their stories, I ask how both listening to FDM and dancing feels. There’s a long pause before they answer. Perhaps Aaron says it most succinctly: “When you hear a flex tune, it’s different from any other music. It gives you that energy. It makes you real hype. It puts you in a different mindset. As soon as you hear it you start making up moves, you get creative out of nowhere. It will never get old.”