Cool 3D World have released a cool 3D album, a surprisingly beautiful set of new age songs to soundtrack their virtual vision of the world 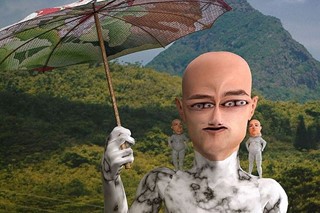 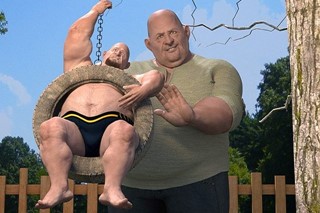 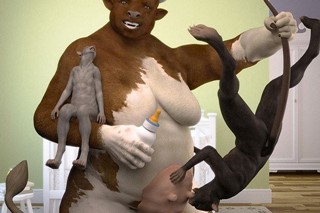 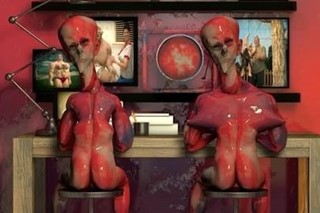 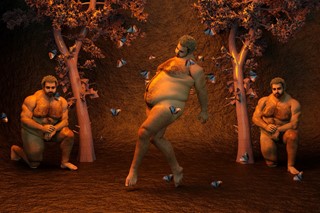 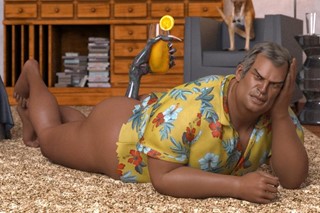 A typical Cool 3D World video goes something like this: an obese nude man balances on a Swegway while eating scraps of food out of a toilet bowl. After devouring a fried chicken leg in one gulp, he shoves a courgette up his nose, rides around an idyllic suburbia, and tosses food to his other obese, nude neighbours. Back at home, he parks himself by the fridge, opens it up, and violently deposits a black goo inside. The camera pans to a motivational poster bearing the words ‘Live. Laugh. Love.’ It’s grotesque, nightmarish, nonsensical – and it’s hilarious.

Unlike a lot of other ‘weird’ internet videos, Cool 3D World’s humour isn’t derived just from its outlandish imagery and non-sequitur endings, but from the quality of the 3D art and animation carved by its creators, Brian Tessler and Jon Baken. Compared to the scrappy, deliberately lo-fi style of internet-reared aesthetics like vaporwave, Tessler and Baken’s work is pristine and high-definition, with an absurd attention to detail in their lighting, design, textural and musical choices. Less than two years since their first video debuted, they’ve already developed a substantial online following, with over a million fans on Facebook and 300,000 on Instagram. Yet despite a growing interest in their uniquely warped and nightmarish perception of the world, Cool 3D World’s latest venture isn’t visual: instead, they’ve released an album.

Considering it’s used primarily in service to the comedy, the music of Cool 3D World is very good on its own merits. Like other offbeat comedians such as Tim Heidecker, Tessler and Baken both have musical backgrounds, and their animations often begin with a musical idea that then turns into a particular image. “We’ll animate with music in mind and compose with animation in mind,” they explain. “We’ll first just watch the video with a click going and try to get a sense for the timing and flow of the cuts. From there, it really depends on the video – sometimes we have specific sound effects in mind already or some kind of melodic motif.”

Though they started out writing short pieces to soundtrack their six-second Vine loops, Tessler and Baken’s music expanded as their videos became longer and more ambitious in scale. Like their videos, the music is pristine and technically astonishing, possibly a result of Tessler’s background in classical composition. It sounds three-dimensional: clean, digital, opulent, like listening in 4K. “We always strive to improve our craft and go deeper into the quality and technology,” Tessler and Baken say. “3D assets and high quality samples are interchangeable in our minds. If we’re not improving, it gets boring really fast.” Eventually, people were asking about the music in the comments, and they realised they had enough tracks they were happy with to form a longer project. “We started working on it in between projects or while other stuff was rendering,” they say. “After a while we had a bunch of tracks we were happy with.”

Tessler and Baken are similar to other internet artists in that they seem to have an obsession with sounds typically written out of the canon of popular music, be it new age, jazz fusion, or 1980s dance-pop records. Their most violent animations are often incongruously soundtracked by these tranquil, healing sounds, and the Cool 3D World album is littered with computer-generated choirs, E-pianos, and synthesisers like the Fairlight CMI, one of the first instruments to utilise digital sampling technology. Though Tessler and Baken insist that there’s “no conscious effort or thought on our part” about referencing particular genres, instead aiming to mix their individual influences and styles on the album, it’s hard not to recognise these sounds as signifiers of a particular era of techno-futurism, where people believed in a digital revolution, not of fine-tuning and incremental upgrades. With its cutting-edge graphics and imaginative, beyond-human designs, Cool 3D World is nothing if not an attempt to fulfil technology’s utopian potential.

Given the duo’s increasingly huge following, should we be expecting a Cool 3D World stadium tour to support the album? And if so, what would it look like? “Tonnes of insane props, an animatronic orchestra performing the songs, blinding lights and lasers, and constant projectiles/slime/smoke being shot into the audience,” they say. “We’re actually already working on some ideas on how to take Cool 3D World to the physical realm – imagine a funhouse full of your favorite 3D characters that you can interact with in different ways.”