From YouTube-famous Beyoncé covers to opening her Formation tour, sister act Chloe and Halle are ready to usher us into a thrilling universe of their own making

Taken from the autumn 2016 issue of Dazed:

Arranged on the steps of a wooden stoop of a rundown house in New Orleans, 18-year-old Chloe Bailey and her 16-year-old sister, Halle, are sitting next to Zendaya, Amandla Stenberg, musical duo Ibeyi and Beyoncé. Dressed in regal layers, their combined, steady gaze demands attention.

Of all the images from Beyoncé’s Lemonade, which also featured the mothers of Trayvon Martin, Michael Brown, Oscar Grant and Eric Garner, this was the one that felt most like the beginnings of a quiet revolution. Chloe and Halle first accepted the trip to film parts of the singer’s latest visual album last winter – not that they had any idea what they were signing up for. “Everyone was in the dark,” recalls Chloe. “We were picked up on a bus that morning and it was filled with all these amazing people.” Sounds like the best school trip ever. “Most definitely,” they smile. 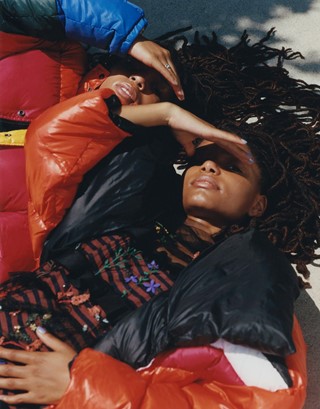 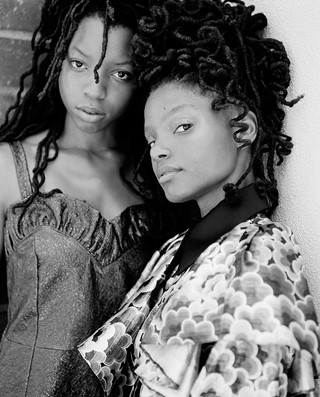 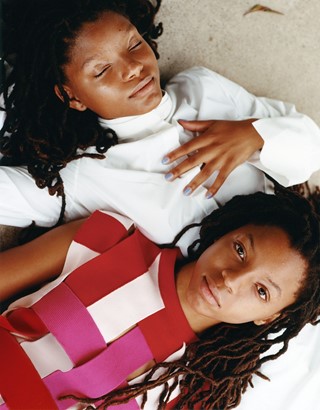 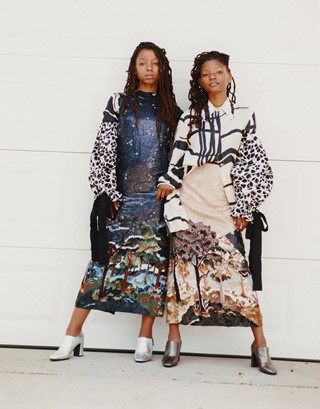 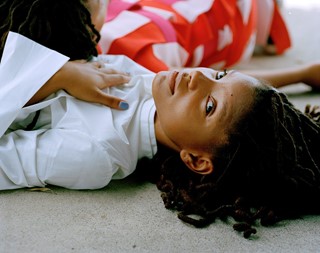 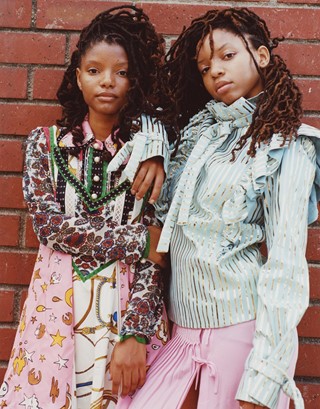 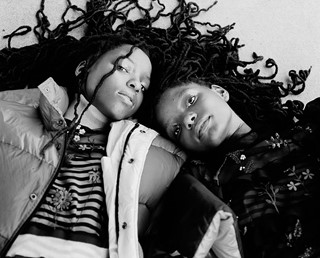 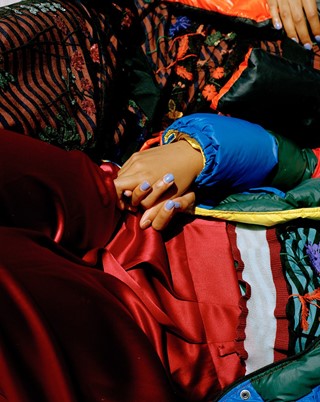 This just-go-with-it attitude has shaped Chloe and Halle’s journey so far. When you meet them, you get the sense you’re in the presence of accomplished pop stars, primed to follow in Destiny’s Child’s footsteps. Consider the numbers: Chloe × Halle have 64·6k Twitter followers, and almost 700,000 fans on YouTube, where they’ve been posting covers of Rihanna, Lorde and Beyoncé since they were 11 and 13. “We were just fans of songs. Arranging them was something fun for us to do,” explains Halle, a student of jazz. Chloe, the production head, cites Missy Elliott, Tune-Yards and Grimes as her education. “I remember we got our first 100 views, we were like…” they give each other an ‘oh wow’ look. Several million views later, things refused to slow down. Particularly after a certain message landed in their inbox…

In December 2013, after the release of the self-titled Beyoncé album, the girls covered “Pretty Hurts” (it now boasts a cool 12 million views) and received the best Christmas gift imaginable – an email. “‘Are you guys signed? Beyoncé wants to post this,’” recalls Halle of its contents. Did they believe it was real? “Yes,” says Chloe, without a moment’s thought. “When we saw the Parkwood Entertainment seal we freaked out.” According to Halle, Chloe dramatically fell to the ground. Suffice to say, if you’re the type of 15-year-old who knows what Beyoncé’s management company is called, let alone what its seal looks like, this is a moment you are ready for.

Within two weeks, they met her on the set of a commercial. “She was in this white glittery jumpsuit like an angel!” says Halle. “She said, ‘I love y’all cover gurls!’” After a couple more Bey hangs, the girls knew this was their big break (they joined the Parkwood roster in 2015). “Now she’s like our favourite aunt! She’s very cool,” says Halle. Chloe co-signs this.

Theirs is a conjoined philosophy born of that same welcome invincibility that inspires a generation of proud young femme-bosses growing up in this post-Beyoncé universe. Their thrillingly twisted debut single, “Drop”, one of the first songs they fully wrote and produced themselves, was released in April. The cinematic video saw them riding horseback between visceral shots of their dreadlocks entangled together. “It’s so important, even for girls who aren’t blood sisters, to have that bond of sisterhood. We need to raise each other up,” says Chloe. “Girls all around. Keep empowering each other ’cos we’re awesome!” When the Lemonade album premiered on HBO this April, they had a joint family gathering with songwriter Wynter Gordon (credited on three Lemonade tracks) at their home in LA. “We had a gallon of lemonade,” recalls Chloe. “It wasn’t homemade, though. We Crystal Light it!”

“It’s so important, even for girls who aren’t blood sisters, to have that bond of sisterhood. We need to raise each other up” – Chloe Bailey

In person, Chloe and Halle are self-assured yet humble, in alternative shades of pink lipstick, their long dreadlocks resting upon young shoulders. It’s lunchtime in the girls’ San Fernando Valley neighbourhood, and Dad has just dropped them off (via a firm handshake). Tucking into two identical plates of vegan tacos, they describe how they arrived home from Washington DC last night and watched Back to the Future with little brother Branson to celebrate, a typical weeknight hang. DC, however, was anything but typical.

Invited by Michelle Obama herself, who they met at SXSW in March, the girls were the musical performers at this year’s inaugural United State of Women Summit at the White House. Elsewhere on the bill were Oprah, Amy Poehler and Patricia Arquette. It was Chloe and Halle’s second visit to the presidential residency. Their first was for the Easter Egg Roll, where they met fans Sasha and Malia Obama, who were “so cool and pretty”. “It has always been our dream to meet Mr Obama and the Flotus (first lady of the United States),” says Chloe. “Mr Obama is so chill and normal. He just hangs in his jeans.” I wonder if they’re scared to be growing into themselves in the public eye. “I haven’t even thought about that,” says Chloe. “Why would that be scary? Just go with it.”

Born in Atlanta, Georgia, the Baileys moved to LA four years ago. Their parents aren’t musical, but their grandmother sang. “It skipped a generation,” they laugh. They grew up listening to Jill Scott and Billie Holiday. Since the relocation, the girls have been home-schooled. Their afternoons are free for songwriting. Halle taught herself guitar, Chloe learned keys. “You don’t see female producers, ever,” says Halle, bigging up Chloe’s beat-making. “We need more. Women have the power to break those barriers.”

“You don’t see female producers, ever. We need more. Women have the power to break those barriers” – Halle Bailey

For now, their debut EP, Sugar Symphony, is about introducing their two-peas-in-a-pod personalities, via experimental R&B that flicks between delicate vocal harmonies and warped, futuristic beats (a full-length will follow in the autumn). “Beyoncé will give us pointers but we have creative freedom,” they chime. “She always encourages us to push the envelope, to share our inner voice.” “Drop” and “Thunder” bring to mind the gospel-laced, gothic electronica of “Drunk in Love” and “Sweet Dreams”, while the skittering “Lazy Love” sets Chloe and Halle up as low-maintenance girls, happy to stay in with a boy and “order takeout”. “Thunder” compares an intoxicating love interest to stormy weather – and yes, their parents are down with the line “I’m trippin’, did he slip me a drug?” “They’re so open and supportive, but if we push it too much they’ll say it’s too mature. We’ll listen because we always want to put out a positive message,” accepts Chloe.

Recently, Chloe and Halle played to sold-out crowds in both New York and LA. Their performances were stripped-back and inventive: Halle looped her guitar while Chloe reproduced their beats live, rapping and harmonising with her sister, and throwing in-sync movements in to boot. In the weeks since our interview, it was announced they will be bringing these on-stage feats of synchronicity to open for the European leg of Beyoncé’s Formation tour. On their Facebook page, the news was announced via a goofy selfie, sandwiched between a clip of the girls singing the National Anthem at a basketball game, and a raw Revolt Sound Session that sees them yelp, thrash guitar and sweetly chat to an intimate audience. Like most teenagers, Chloe and Halle are a bundle of contradictions, delivered with absolute conviction.

Before they go, I wonder if there’s anything they think they’ve taught Queen Bey? “Oh my gosh! That’s something you’d have to ask her!” laughs Chloe. That’s not going to happen anytime soon, I say. “Well, you really never know – it could!” says Chloe. I mean, she would know…