After beating pop’s macho hired-guns at their own game, Bibi Bourelly tells us why she wants to bring down music world bullshit from the inside

“I’m out here trying to say don’t fucking be distracted and do what you love and fucking stand for something and say something in your life.” When Bibi Bourelly’s voice, rapid and unwavering, wallops your ear, it’s hard not to falter slightly. Despite a hectic weekend schedule that began with a long flight delay on Thursday, and included a sweat-drenched Society Sessions show in the basement of the old Williamsburg Savings Bank on Friday, by the time we get to Sunday, Bourelly is ready to throw punches. Just like her music, Bibi Bourelly comes in strong, and makes no apologies. It’s a little bit intimidating, but in a way that makes you want to get on her frequency. 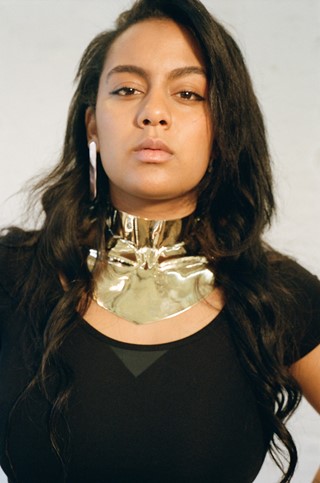 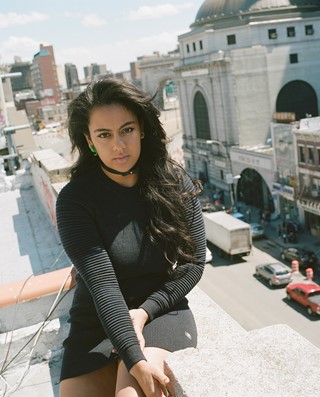 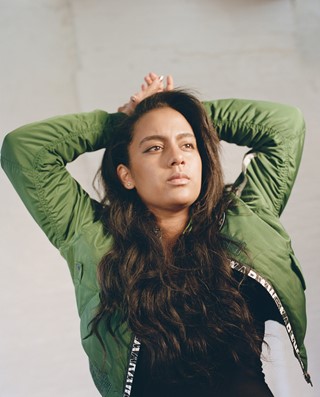 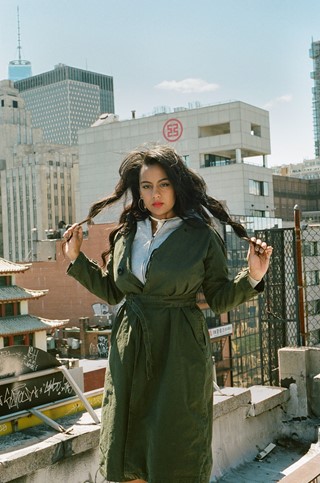 When she lit up the pop-cultural radar in 2015, Bourelly had already worked behind the scenes on the production of Rihanna’s “Higher”, but it was a co-writing credit on Rih’s swaggering trap single “Bitch Better Have My Money” that really put her on the map. The acclaim that greeted the young songwriter, who was only 20 when “BBHMM” was released, came as a much-needed reprieve from the male hired guns – Dr Luke, Max Martin, The-Dream – you normally hear applauded for writing huge pop singles.

Young and seemingly unconquerable, Bourelly’s outspoken attitude marked her out as a star in her own right – so when she struck out on her own with first single “Riot” in April of last year, it felt like a natural step. “There’s nothing wrong with writing for other artists,” says the musician, who is now 21. “But that’s just not what my purpose is. I still have a vision in mind. I still have a goal in mind.”

On record, Bourelly’s voice is husky beyond its years: pained and raw, forcefully enunciating certain notes and casually letting others linger. This is music that dances between the melancholy of lived experience, the defiance of having taken enough shit, and an unwillingness to take any more. On “Riot”, which appeared on her debut EP, Free the Real, in May, she sings soulfully over sparse guitar chords, “If I leave, I’m not leaving in silence / You won’t see me crying,” an admission that there’s more to her than meets the eye, but that you may never get to see it. But there are also tracks like her cover of Future’s “Trap Niggas”, where she raps with all the gut-punching attitude she exudes in interview. That’s the thing about Bourelly: she seems to be making the exact music she wants to make. It’s a genre-blind inconsistency that celebrates dynamic womanhood, and the many facets of her personality, without even trying.

“I’ve walked out on executives. Fuck them. You deal with all the people you looked up to as a kid and you realise it’s all bullshit. I think that makes you develop thick skin” — Bibi Bourelly

Born in Berlin, Bourelly spent her early years living between Germany and Washington DC, before moving to LA at the age of 19 after being discovered on Instagram by a manager. Of Moroccan and Haitian descent, she is fiercely protective of her identity, while at the same time staunchly refusing restrictive labels. She says she tries “not to think about” her background affecting her work: “The moment you’re conscious of that, you imprison yourself. The world is doing that to you anyway. Me even being conscious that I’m a black woman, all that shit, it just puts me in a box the moment that I say it out loud. I’m already fucking boxed in by a majority of the world. So I don’t like to label myself as anything.”

Instead, Bourelly puts her faith in her work ethic, and her hard-won talents. “I think I’m good as fuck at what I do,” she says with a tenacity that most never come by in their entire lives, let alone at 21. “I work hard. It’s the 10,000 hours and 20,000 hours and, fuck it, millions of hours of practice that give you confidence, in knowing that you can follow through and pull through.”

Bourelly’s fearlessness comes from a place of experience. She has known life at its cruellest, losing her mother to cancer when she was just six years old. “I suppose that it’s partially my personality,” she says of her ability to persevere. “It’s also circumstantial. I’ve seen people pass away. I’ve seen how fragile life is.”

Momentarily, her guard is down, but it’s a blink-and-you’ll-miss-it moment.

But Bourelly knows that self-assuredness only protects you so far in an industry that isn’t always sympathetic or nurturing towards women’s experiences. “The problem is that we let business influence culture,” she says, suggesting that change is something that needs to happen at every stage of music production and sharing. “People who give a shit about music have to be put in these radio and executive positions. It’s kind of in the artists’ hands – a few individual artists who care about culture and art, trying to make honesty a trend, and trying to make quality a trend.” Signed to Def Jam, Bourelly might just be one of these ‘individual artists’ who has to take on the herculean task of breaking down inequitable music industry business models from the inside.

“People who give a shit about music have to be put in these radio and executive positions. It’s kind of in the artists’ hands – a few individual artists who care about culture and art, trying to make honesty a trend, and trying to make quality a trend” — Bibi Bourelly

Bourelly’s third single, “Sally”, was one way she sought to mobilise diverse voices against arbitrary judgments. The #SallyIs hashtag she conceived in tandem with the track exploded on social media, with fans proclaiming their own insatiable individuality on Twitter and Instagram, young women holding handwritten signs with messages like “My Sally is always always always being my own #1 fan” and “My Sally is fierce, independent and she’s focused”. Bourelly’s goal of getting people to “say something” seemed to come to fruition, and although the hashtag was embraced mostly by women, Bourelly insists it’s not a female-centric concept. “#SallyIs is not just about women, it’s about everybody. People just automatically connected.”

This spirit of connection translates into her personal life too – her friendship with London rapper Little Simz, for instance, which is likely to give you the warm and fuzzies should you catch the pair supporting one another on social media. But Bourelly is careful not to label their friendship based on superficial factors. “It’s a genuine relationship,” she says. “I don’t care what gender you are, I don’t care what race you are, I don’t care where the fuck you’re from. When we meet and I think you’re cool and we vibe and click, I fuck with you, and that’s that. I’m sure that part of the reason why Simz and I connect is because we face a lot of the same struggles, but that’s not the premise of our relationship, you know?”

Bourelly seems hyper-aware that being a woman in a male-driven industry, and indeed world, has its setbacks, and she’s not afraid to call that out. “People cannot deal with a female who has a fucking opinion,” she says. “They’re automatically labelled as a man or masculine. Why? Why am I meant to walk through life without shit to say about anything? Why, if I’m just as good as this person, as this guy in his job, am I meant to be timid? Why am I meant to be frail?”

“I’ve walked out on executives. Fuck them,” she continues, anything but frail. “Beyond that, you deal with idols, you deal with all the people you looked up to as a kid and you realise it’s all bullshit. I think that makes you develop thick skin.”

“People don’t have to like what I’m saying,” she says of her hopes for the year, which will see a second EP drop later this month and an album further down the line. “But I encourage every single fucking individual in the world to have something to say, and I hope I inspire or evoke some kind of emotion in people to fight for what they believe in.” Her voice on the other end of the line is so charged it’s magnetic. And that audible spark, that Bibi Bourelly rallying timbre, makes it difficult to doubt her.

Free the Real Part 2 is out this July