As his new EP Summer Songs 2 crash-lands, the flame-haired ATLien from a space-pop stratosphere talks #boatlife, being in the moment and making it happen with Madonna

Lil Yachty is an 18-year-old rapper and singer on his first big national tour, but, at 2.30 on a Tuesday afternoon in Los Angeles, more than anything, he is a man in desperate need of a naptime.

Today was meant to be a rare day off from the road for Yachty – he’s currently opening for fellow Atlanta rapper Young Thug – but instead of recording or hanging out with the two girls he says are coming to visit him later or, yes, sleeping, he’s video Skyping with me, a few thousand miles away in New York City. At first, he excitedly shows me his scores from a morning of shopping (a bright pair of orange Supreme cargo shorts and an oversized baby-blue tee with the Seinfeld logo), and orders a chicken sandwich (“with ketchup,” he insists, “and a fruit punch!”) from Chick-fil-A. But after eating, he crashes, sprawling on the bed of his Airbnb, lying on his side and placing the computer camera close to his face. His signature red hair, beaded as ever into a coral reef of beautiful crimson strands, splays out across his pillow. He looks sweetly at the camera, like he’s posing for a Manet portrait, with a dreamy expression somewhere between a smile and a stupor. “I’m tired,” he says, as his eyelids quiver shut. 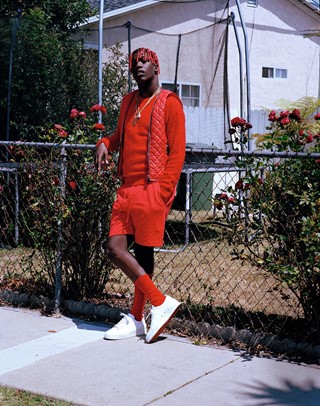 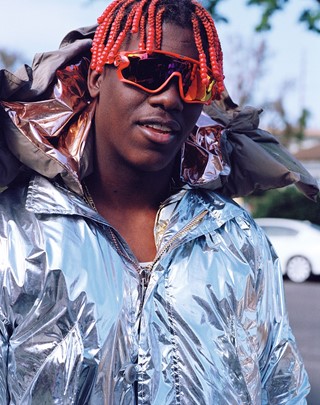 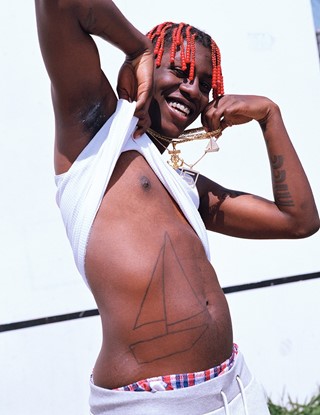 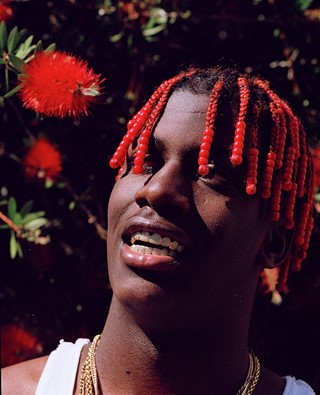 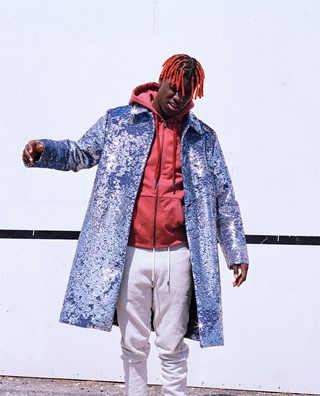 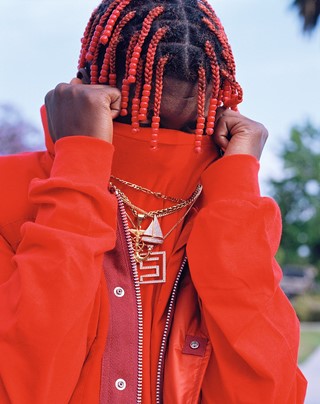 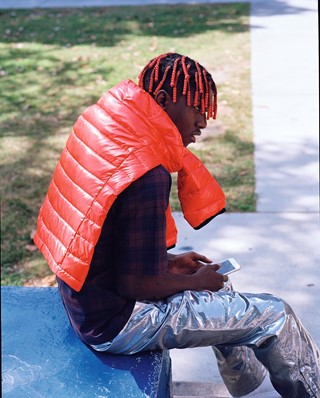 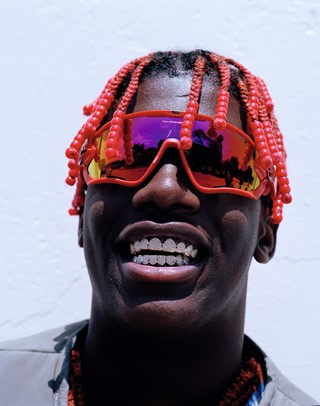 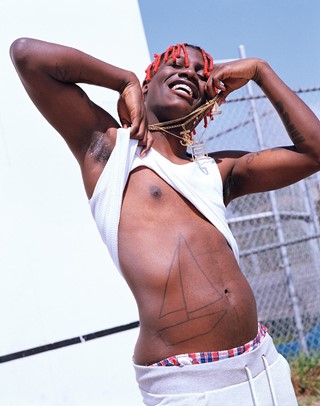 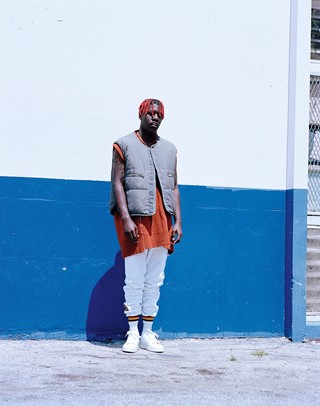 Yachty’s exhaustion needs no justification, and not just because, as he will tell me later, he was up all night working on new music: since releasing his first mixtape, Lil Boat, in March, he’s had an unusually quick thrust into the public consciousness, even for these elastic times. Things truly sped up in February, when he was chosen to model in Kanye West’s Yeezy Season 3 show at Madison Square Garden. It’s where he first met Young Thug (“He’s quiet,” is about all he will say of the infamous rapper), his now tourmate, but not, unfortunately, Naomi Campbell, who was also modelling. His flame of hair stood out on the livestream of the event, and made him something of an instant human meme. Once his face was known to the masses, his unique sense of style and colour, of wearing bright sportswear and big white sunglasses and looking pretty much like no one else on the planet, also struck a chord. “I like vintage Nautica,” he says. “I’m not a dark guy. I’m not really a black-and-white, emo-looking kind of guy.”

Capitalising on his moment, he quickly released Lil Boat, a sing-songy collection of AutoTuned Atlanta rap that he has playfully dubbed “bubblegum trap”, largely produced by his best friend and housemate Burberry Perry. Lil Boat is loose and impressionistic, a sometimes-silly, sometimes-sincere ride through singing and rapping that calls to mind fellow Atlanta weirdos ILoveMakonnen, Soulja Boy, and the aforementioned Young Thug. “That’s why they keep talking (about Atlanta),” he says. “Because it’s different.” He is known for live shows that are unwieldy and refreshingly over-the-top, filled with jumps and moshes and sing-alongs. A performance at the VFILES store in New York a few months ago almost had to be closed down by the cops because so many kids showed up. “They fuck with me because they can relate to me. Because I’m the same age,” he says of the rabid fans at that show. “They shut the whole block down. I didn’t expect it, but I wasn’t surprised.”

Age is, in truth, a major key to the excitement around Yachty, born Miles Parks McCollum: there’s a carefree, joyful, undoctored attitude to both his music and his outrageous style that would have already been beaten out of the old and wizened. He doesn’t just have his finger on the pulse – he is the pulse. This isn’t to say that there’s no calculated artistry here or that he doesn’t work his ass off to make things happen, just that the light bloom of youth is something that can’t be cultivated past its expiration date. It exists only when you’re, say, 18, and making the music and putting on the clothes that are instinctively cool to you. What you make is fresh because you are fresh.

“The thing is, I either got it or I don’t got it. The beat plays, and I instantly have it. If not, I don’t care, I’ll never have it. You can’t force it” — Lil Yachty

I ask him about the last song on the mixtape, my favourite, called “We Did It *Positivity Song*”, on which he tenderly croons about how happy he is to find success, over an easy beat that sparkles like the muzak at a Tokyo fro-yo shop, and his creativity sounds as relaxed as his baggy tees. “I’m just a positive guy,” he says simply of the song’s lovely mood. “I freestyled it. I just went in the booth and did it. The thing is, I either got it or I don’t got it. The beat plays, and I instantly have it. If not, I don’t care, I’ll never have it. You can’t force it.”

At the time of our talk, Yachty has a new mixtape planned for the summer, which he’s editing down at the moment, and which he says will be filled with the same kind of sugary songs that populated Lil Boat. “I don’t have a girl, so I’m fake-emotional,” he says of his penchant for writing romantic songs. “I write songs for people with girls.”

But how does an 18-year-old maintain momentum, grow into an artist of considerable chops and not just of instinctive joy? For one, Yachty has a feeling for delightful melody that few other artists have, and applied with the right filter, could be catchy enough to land on mainstream radio. “I just want to be on every lane. Pop, EDM – I want to be genre-friendly,” he says. “Do a song with Madonna, then do a song with Taylor Swift, then I’ll do a song with Lil Wayne – just cross (them) all over.”

What about the hair, which he says he dyed red on the encouragement of his mum, herself a fashion plate, while he was working at McDonald’s – and which made him something of a style star in high school before becoming his calling card as a rapper? “Everybody wants to be like somebody else,” he remembers. “I was always what they wanted to be like.” But, as he ascends through the ranks of pop culture and gets a bit older, would he ever cut it off for a more grown-up look? “Maybe,” he says. “I couldn’t give you a date, like at 22 or 23 (years old). I’m not worried about it. I’m pretty sure I’ll handle it accordingly.”

It was, I realise, a dumb question: what 18-year-old on earth plans ahead anyway? Before he can even finish answering everything I need to ask, let alone imagine his life in the distant land of his early 20s, he turns his face away and slumps under the covers, bored by my questions. And though I can’t be entirely sure, it seems like, for a moment, I’ve lost Lil Yachty to dreamland. Here he is, rap’s most promising ingenue, live on his laptop and asleep right in front of me.

Summer Songs 2 is out now on Apple Music