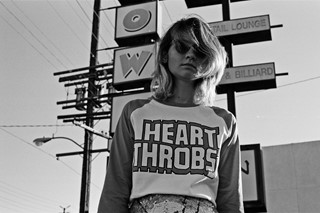 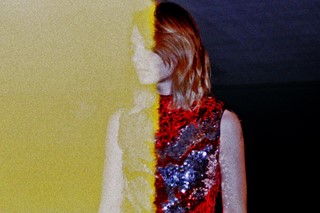 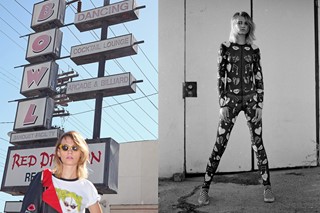 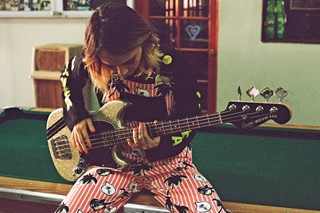 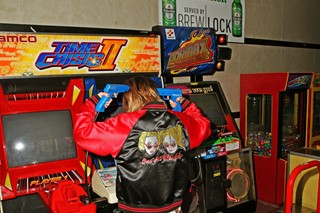 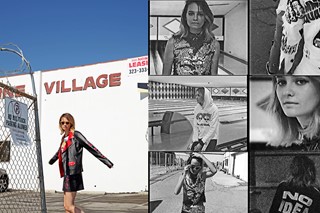 Clementine Creevy is an LA singer-songwriter with an excellent name. Though best known for fronting Cherry Glazerr, the alt-rock band that she formed as a high school student, Creevy is a multi-talented artist in her own right, writing solo songs as Clembutt, dabbling in modelling, and acting in shows like Amazon Prime’s Transparent (where she fronts the fictional rock band Glitterish).

With Cherry Glazerr, Creevy writes dreamy, fuzzy, hook-filled alt-rock songs. Creevy initially formed the band to flesh out the bedroom demos she’d been recording, but pretty quickly they grew into their own identity and caught the ear of Burger Records, who released the Papa Cremp cassette in 2013 followed quickly by debut album Haxel Princess the following year (these were heard by Hedi Slimane, who asked Cherry Glazerr to write a song for a Saint Laurent show soundtrack).

Cherry Glazerr’s songs are told with the sort of mixture of profundity and ridiculousness of youth – you’re as likely to hear an earnest song tackling homophobic bullying or deconstructing the male gaze as you are a song about wanting to eat a sandwich or suffering from cramps. So it made Creevy a natural fit for Heartthrobs, a new collection from Australian designer Emma Mulholland inspired by riot grrl, DIY zines, and 90s girl bands. The campaign – made with stylist Imogene Barron and photographer Byron Spencer and shot on location in Eagle Rock, LA – follows Creevy around town, going bowling, getting burgers, and killing time on the streets. “We were big fans of Cherry Glazerr and thought it would be a perfect match,” Mulholland tells us, “She was really fun to shoot with. She actually goes to the bowling alley we shot at all the time because it’s near her house.”

Check out the campaign above and read on for her responses to our questions about her art and her approach to life.

How did Cherry Glazerr form?

Clementine Creevy: We emerged from a semi-toxic, outerworldly barrel of goop called ‘The Glaze’, playing our instruments. We are here to spread the glaze.

Do you ever feel weird being the ‘face’ of the band?

Clementine Creevy: Yes and no. I’m not uncomfortable in my role as the creative director and founder of Cherry Glazerr, but I have to be careful and conscientious that my bandmates, who are the real MVPs keeping everything together, are not undervalued. Sean (Redman, bass), Sasami (Ashworth, guitar), and Tabor (Allen, drums) have influenced me in so many ways. They are the backbone. Collaboration requires you to transcend your ego, which can be hard, for me at least, but it's an ongoing practice. The song is the king/queen that we are only serving. I’m lucky to be in a band with fantastic humans who dedicate their lives to music.

What would you be doing if Cherry Glazerr weren't a thing?

Clementine Creevy: This is not something I chose to do, this is something that comes from a place of necessity. I cannot not play music, at least right now in my life. So to answer your question: I have no clue.

Do you consider Cherry Glazerr a punk band? What does punk even mean to you in 2016?

Clementine Creevy: I was just having this conversation about what punk means today with this girl at a party the other night. I think 70s and 80s punk emerged from weirdos needing to find other weirdos and supporting individuality and freedom and loud expression. A safe place. That definitely still exists today, but I suppose it’s harder to pinpoint because there is so much, of everything. I don’t know, it's not up to me to genre our music. It's up to the listener to do that.

Clementine Creevy: I like acting. I certainly love and appreciate the art. It’s a beautiful thing and much harder than I realised.

What was the last piece of art that moved you?

Clementine Creevy: A video I watched of The Cramps performing ‘Tear It Up’ in 1990; or ‘Baby Let Me Follow You Down’ by Bob Dylan off his first record, the self-titled.

What’s bad about it?

What's the plan for Cherry Glazerr through 2016 and beyond?

Clementine Creevy: We’re extremely excited to say that we’ll be releasing a new album this year. It’s pretty cool. We’re also touring places we've never been before and exploring and growing together. World domination. Slave to the Glaze.