Already killing it in Asia, will the leader of K-Pop group 2NE1 be the first female Asian singer/rapper to make it big in the west?

Of all the places you’d expect to encounter Asia’s ruling pop superstar, this isn’t one. We’re in a sketchy, 60s-era hotel just off a freeway in Queens, NYC, that markets itself as “exotic” – which it is, if by exotic you mean a mermaid fountain in the lobby  and fabulously cheesy themed rooms with names like ‘Arabian Nights’, ‘Cupid’ and ‘Safari’. Outside, it’s a sweltering day in August. Inside, the Seoul-born idol is cavorting around rooms called ‘Fantasia’ (floral) and ‘New York Skyline’ (neon horizon). Then again, as a rapper, singer, songwriter, fashion plate and leader of Korean girl-group juggernaut 2NE1, CL is clearly a woman who thrives on contradiction.

Her ambition? To make music history by becoming the first Asian female artist to launch a viable career in the west. As part of a group that’s long distinguished itself as more subversive than many in the K-pop milieu, CL is the most independent-minded member. Dubbing herself  “The Baddest Female” on her solo debut in 2013, in the past year she’s rapped about strip clubs and lesbian crushes on Skrillex’s “Dirty Vibe”, and held her own with Diplo, Riff Raff and OG Maco on the trapped-out “Doctor Pepper” – and now she begins a new chapter with her first English-language EP, the remarkably varied Lifted. What it all adds up to is that the performer born Lee Chae-rin is far from your average K-pop star. 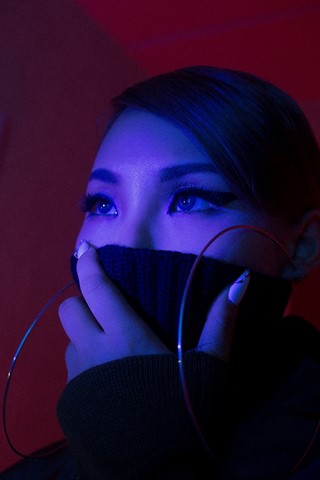 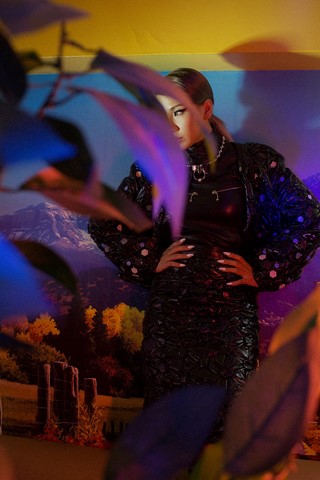 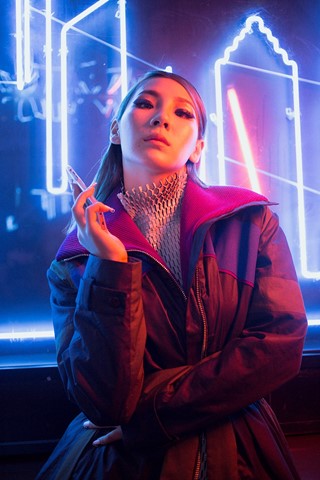 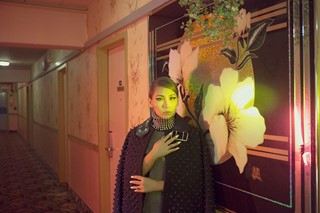 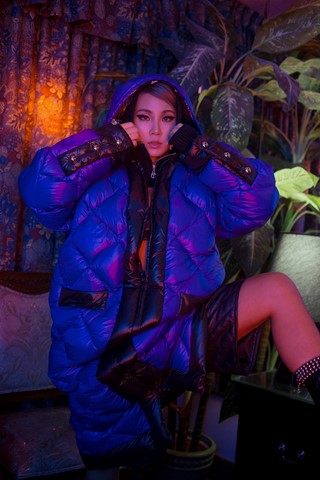 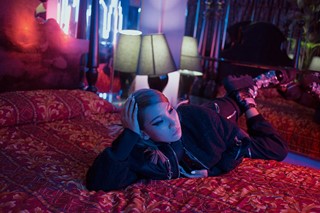 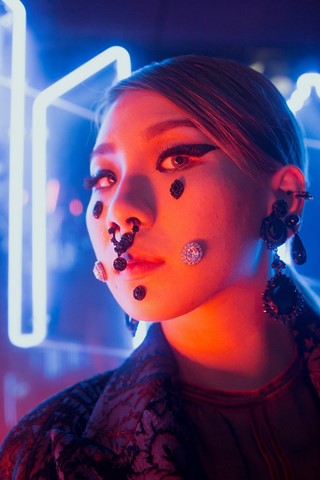 For her friend, American fashion designer Jeremy Scott, CL’s music transcends national borders. “There is K-pop – and then there is CL,” he says. “She isn’t making music that is traditionally ‘K-pop’ as much as she is making great music – but because she’s Korean, that’s what it gets called. I’ve seen it first-hand when I’ve travelled in Brazil, Chile and Argentina, and I’ve seen it in Europe, where her fans came out in throngs at my Moschino show!” That ease with a global audience – and her fluency in English – comes in no small part from the fact that CL grew up around the world, attending international schools in France and Japan as well as Korea. “If she didn’t have that background, we probably wouldn’t be having this conversation,” says Jeff Benjamin, K-pop columnist for Billboard, who has championed CL and 2NE1 for years. He also gives CL credit for taking a subtle approach to breaking her music in the west. “What’s smart is how she’s sort of tip-toeing her way in,” he says. “No one’s ever made it in music by forcing themselves down people’s throats.”

Guiding CL’s slow-and-steady entry into western pop is SB Projects, the team headed up by Scooter Braun that shepherds the careers of Justin Bieber, Ariana Grande and Carly Rae Jepsen. “There’s no real road map for what CL’s trying to do,” says Braun lieutenant Dan Suh. “It’s unprecedented, and that’s exciting.” And while she’s a new artist to some, Suh points out she’s had a ten-year career in Asia that serves her well. “The easiest way for me to describe it is, she has every tool in the toolbox. She’s a fully developed artist.”

There are big cultural differences between the famously conservative South Korea that put CL on the musical map and an America whose pop stars are often more in-your-face. Breaking one market while keeping the old one happy might seem like a tricky balancing act, but, on Lifted, CL is more than up to the task. Lead single “Hello Bitches”, which plays off CL’s role as 2NE1’s resident rapper, melds hip hop and pop, with no shortage of attitude and even some Korean verses. “Fallin’” is an unexpectedly moody electro-soul collaboration with Blood Diamonds and DJ Dahi. And title track “Lifted”, on which CL sings like rarely before, is a bright pop reworking of classic Wu-Tang cut “Method Man”. It’s some kind of inspired, irresistible genius.

For months now people have been wondering what your debut English-language record would sound like. Because with 2NE1 you’ve done pop, hip hop, R&B, electronic and even reggae flavours.

CL: Personally, I don’t like defining myself. I don’t want to be put in one category, in any kind of way. The CL of 2NE1 was mostly rap. But like you say, there are songs where we all just sing, and I love singing! I don’t want to come out and identify myself as a rapper. It’s just music, I just want to make good music. I wanted to make this EP like a sampler. I kept thinking, ‘My fans should know where I’m going.’ I didn’t want them to be completely confused, because it’s not gonna be a Korean album.

You performed with P Diddy at Miami’s Ultra Music Festival earlier this year. How does someone prepare for an epic moment like that?

CL: He was so supportive. It really depended on whether Diddy said OK or not, ’cos I was rapping over his beat for ‘It’s All About the Benjamins’, and I was kind of introducing him on stage. But he was really cool, and I had a FaceTime rehearsal with him. He was like, ‘Yeah, let’s do it!’

“Fallin”, your collaboration with Blood Diamonds and DJ Dahi, will surprise a lot of people. Tell me how that one happened.

CL: I was in the studio with Blood Diamonds in LA, and Bibi Bourelly (“Bitch Better Have My Money” co-writer) came in. She was drinking a bottle of Honey Jack. We were so in the mood! Just before we did “Fallin’’’, we made this other really ratchet song for fun. When she was writing with me, I was like, ‘Please, do whatever you feel like.’ I need to write with someone because my English lyrics aren’t perfect, and I love bouncing ideas around. So I was like, ‘Be free, feel it out!’ I’m pretty sure she was drunk. She had the whole Honey Jack to herself!

“I still don’t know how people will feel about my music, or if they would just categorise me as ‘that Asian girl’” – CL

What about “Hello Bitches”, how did that one come together?

CL: There’s a remix of that called “Asian Bitches”, which has M.I.A. on it. It’s from two or three years ago. We started it then, but I was like, ‘“Asian Bitches” is too categorised.’ I mean, you can’t sing along with “Asian Bitches”, you know? That’s really hard. Even Asian boys can’t sing to that. So I said we should come up with something different. Everyone was like, ‘No, it’s cool, it’s cool,’ but I didn’t like it. Then one day I said in Korean, ‘Annyeong, bitches!’ I was like, ‘I need to change it to that.’ And Teddy said, ‘Why don’t we just say, “Hello Bitches”?’ I was like, ‘OK, now I love the song. Now I can put it out.’

Your lifestyle must be so different in the US. It must be nice to know you could walk outside this hotel and, unless there was a K-pop fan outside, you would not be recognised.

CL: I love it – it’s a rare freedom for me. I love how I can go to the airport and no one is there. I always had to be so prepared to go anywhere before. So now that I can just be like this, it’s such a freedom. I’ve been enjoying that for a couple of months now.

Do you have a house in LA now?

What was it like when you first came out here to work on the record? Did you have friends in LA?

CL: Well, I mean, there’s Jeremy (Scott). I’ve known him for ten years and he is my best friend. But he wasn’t even here a lot, because he had to go back and forth to Milan for Moschino. But when he was in LA he was my only friend, to be honest.

“Growing up I listened to a lot of Queen and Lauryn Hill, because of my dad. Those are songs that have messages. That’s kind of rare these days” – CL

You grew up all over the world. Do you think that’s affected your outlook?

CL: Yes! My dad didn’t like staying in one place. So we moved around every year, to a new house, new town, new country. I went to international schools my whole life, and now, I’m still leading that life. I don’t know where I’m living – I’m, like, living on a plane right now.

Was there a pop artist that you admired or idolised growing up?

CL: Not really. Which is hard for me, because that means I can’t really copy anyone. Growing up I listened to a lot of Queen and Lauryn Hill, because of my dad. Those are songs that have messages. That’s kind of rare these days. I’m not saying it’s necessary, but when I’m doing what I’m doing, I want to have some kind of message.

You’ve often been described as a tomboy – where do you think that comes from? Did you grow up with a bunch of brothers?

CL: No, in my family there’s a lot of girls. Normally people think of Asian women as timid, but I think I’m very strong. For ten years, I’ve been hanging around with dudes. YG, my crew in Korea, (boyband) BIGBANG, the producers I work with, my stylist – we’re all friends. It’s all guys – I’m the only one from 2NE1 that really hangs out at the studio. That’s why I’m a tomboy.

What’s the status of 2NE1 at the moment? And does this solo work affect your commitment to the group?

CL: Well, 2NE1 just finished a tour six months ago. We were always supposed to take a break, and we’ve always taken really long breaks. We don’t try to rush anything. We always want to do things at the right time, and when we have good songs. So the girls had things that they wanted to do, and they’re working on that.

So even if CL’s solo career takes off like a rocket, you’re definitely doing another 2NE1 record?

You’re launching a pop career in a part of the world where people expect pop stars to be more bold and open. How do you deal with that without upsetting your fans back home in Korea?

CL: This was a conversation I recently had with Scooter (Braun). He asked me, ‘What did the ten-year-old CL want?’ And I’m actually following that young CL’s dream. I think not losing that is important. Because, yes, I am successful in Asia. But if you think about that too much, you become boring. Because you don’t want to take risks. It’s so easy to be pretty and perfect. Once you have the money, fame, success or power, it’s so easy to maintain that, because all you have to do is play it safe. To be honest, I really don’t care. Because I’m doing this for myself, too.