In just a handful of years, Alt-J have gone from geeked-out Uni mates swapping music samples over MySpace to becoming Mercury Prize-winners who (although still music geeks) have headlined Madison Square Garden and can “now afford biscuits”, as keyboardist Gus Unger-Hamilton puts it to me over the phone (houses made from biscuits, am I right?). Their sound has always been a lot of things at once; dripping in harmonies, but wonkily discordant; full of intricacies, but beautifully hazy, with genre’s splicing and bleeding into each other as if the band couldn’t devour their influences quick enough.

Sound obsessors that they are, it makes sense that Alt-J’s Gus would be there for last week’s coveted Marshall event, where Dazed and the cult music brand linked up to celebrate Marshall’s plans to release a music-orientated, volume-pushing new smartphone with two stereo jacks and hi-def sound. Before Gus kept the party alight with his DJ set, he caught up with Dazed to talk about his love of Miley Cyrus and his ultimate movie soundtracks.

Uncut Tems: the rise and reign of the queen of alté R&B
Marshall x Dazed Event8 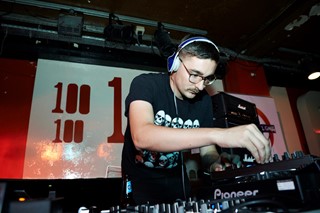 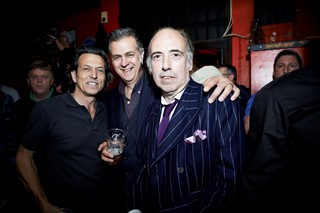 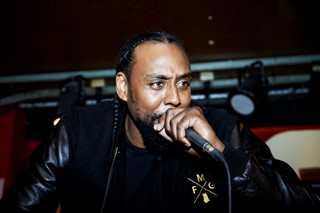 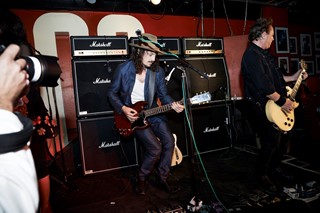 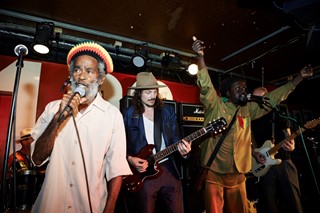 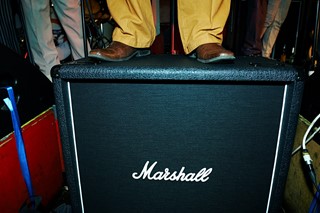 You headlined Madison Square Garden earlier this year. What did that feel like?

Gus Unger-Hamilton: It doesn’t really sink in until you’ve done it. Looking back, it’s like “Christ! That was a big deal” but at the time there’s so much build up to it, and it’s over so fast that you realise it was just a gig. But it was a real achievement for us and we will have always have done that. Smaller venues make me more nervous to be honest, although none of us get that nervous now.

Why did you choose to sample Miley Cyrus on “Hunger of the Pine”?

Gus Unger-Hamilton: Tom, our drummer, had already isolated that particular sample from that song and we liked the sound of that sample. Had it not been Miley Cyrus, we would have still used it. It wasn’t about the name or anything like that. If anything, the fact it was by Miley Cyrus made us question whether it was a good idea or not because we didn’t want to be accused of courting fame or headlines, but she’s got a great voice once you strip away all the production. It sounds good and we like it.

What’s your favourite movie soundtrack of all time?

Gus Unger-Hamilton: The score to There Will Be Blood is amazing and it could be my favourite movie full stop actually. I also love the soundtrack to Wes Anderson’s Rushmore, where there are loads of tracks by the Kinks and British invasion stuff. It makes me think, “Wow. I want to make a film with all those songs as well.” Whatever you’re filming looks good when it’s soundtracked by something special.

You’ve written a song for the new Gus Van Sant film Sea of Trees. What was that like?

Gus Unger-Hamilton: We’ve done quite a lot of film stuff actually and it’s tricky because it’s often a let down because there are so many people involved in the process of making a film that you end up canning music or cutting it down. In Silver Linings Playbook they only used 20 seconds of a song we had written in the end despite the fact the director liked it. We’ve had lots of experiences of stuff like this happening, so it’s made us quite shy of doing something like this again for a long time because it’s a ball ache.

What’s your favourite song off your second album This is All Yours and why?

Gus Unger-Hamilton: Definitely “Nara”. It’s the first song we worked on as a three piece since Gwil (Sainsbury) left and it was exciting that we could still make new stuff. Also, it’s a long song and I like to really get into something. I like long books, I like long films. I like to luxuriate in listening to something if I think it’s really good.

Our annual ‘Girls Rule the World’ issue of Dazed is out now. Who are your top three favourite female music icons?

You were nominated for a Grammy earlier this year. Were you pissed off that you didn’t win?

Gus Unger-Hamilton: It was great being nominated and we never expected it. I found out on Twitter, which was quite funny. The whole thing was over so quickly and when we found out we didn’t win we were like, “Oh! Fair enough!” I don’t really understand the Grammys that much and it’s not the prize that means the most to us, and prizes don’t mean that much anyway. I think St. Vincent is quite a good person to lose to as well.

Who would play you in a movie about Alt-J?

Gus Unger-Hamilton: I think Daniel Radcliffe would have to, even though he’s pretty short. They’d have to do some camera tricks to make him appear 6”5. I always used to get told when I was a kid that I looked like Harry Potter. People would constantly shout it from cars! I had glasses but not round ones. The resemblance was passing but there was enough there. It was still very annoying.

What’s been your hardest moment as a band?

Gus Unger-Hamilton: Before we got signed, we were bloody skint and quite miserable. There were times when we couldn’t afford to eat and that was kind of crap. We didn’t think about giving it up, but when you’re in that situation you don’t feel very creative, you just feel pissed off a lot of the time. It’s nice that I’m more comfortable now. I own my own flat now, and to think that only four years ago I was rummaging down the back of a sofa to find enough change to buy a packet of biscuits is crazy. I’m happy.

What’s next for Alt-J?

Gus Unger-Hamilton: Touring until Christmas and then a little rest before we come back, make a third album, win ten Grammys and retire. Next year me and my girlfriend are going to the west coast of America. I’ve only just learnt to drive and she’s learning at the moment so we’re quite excited to do the whole coast-to-coast thing.