Rick Ross is recording mixtape shout-outs at a radio station in Soho. “You’re listening to Shortee Blitz and DJ MK – bosses in the UK,” he says for the third time. Even the biggest rappers in the world need to have their levels checked. Without moving a muscle, his head tilted down, trademark Cazalli shades over his eyes, he lets out his trademark from-the-bottom-of-the-chest “ungh!” The Brits in the room shuffle with sheepish joy. DREfilms, his personal videographer, is documenting the moment for posterity. On the filmmaker’s left hand, holding the lens, is a jewel-embossed ring the size of a two-pound coin, while his right thumb, steadying the screen through which he watches Ross, is tattooed with the word “AMBITION”. Outside the studio, a label rep is ordering 120 chicken wings from Nando’s under instructions from the rapper's famously unflappable manager, Gucci Pucci. Last night, the entourage were celebrating the success of Ross's seventh album, the Billboard #1 Mastermind, at a private party. Ross's three-song appearance stretched into a 19-track marathon in a room small enough to touch the ceiling.

The rapper is on the publicity trail, European leg, hammering the album. London today and tomorrow, Paris the day after. Every time he enters a radio station he’s accompanied by several five-foot-tall cardboard cutouts of himself, along with cutouts of his partner drinks brands, Ciroc and Belaire Rosé champagne. His guys are dressed in varsity jackets with “Black Bottle Boys” embossed on the back (a reference to his own-brand champagne), and the smoky tang of fresh, expensive weed is everywhere. This is his third back-to-back radio appearance of the day, the third time he’s recorded a set of ident-tags. There are four more stations to go. Good thing they’ve got chicken wings coming.

He mentions in passing that he just spent £60,000 on impulse at the Bugatti dealership outside his Mayfair hotel. “People from Miami, somewhere in the back of our mind, we think we’re dominant or something”

It sound like a lot of work, I tell him. “Yeah man,” he says. “All last week we were doing radio all through the south. Big territories and small. Gotta remember your roots.” Ross was born and raised in Carol City, a tough suburb of Miami, Florida, that’s now best known for being the home of tragically killed teenager Trayvon Martin.

As he walks through the station office, grown men rush up to ask for Instagram snaps. He refuses no one that gets past his two hype guys and vast bodyguards, yet rarely, if ever, breaks his slow, rolling stride. When he speaks, it’s extraordinary: drawn-out, rounded vowels that come deep from his chest. You've certainly heard this voice if you’ve contributed to the quarter of a billion plays on his Vevo, because he raps how he speaks, speaks how he walks, walks how he spends, how he eats, how he tweets, how he orders his weed. He mentions in passing that he just spent £60,000 on impulse at the Bugatti dealership outside his Mayfair hotel, although he has to be reminded what currency we use in Britain. 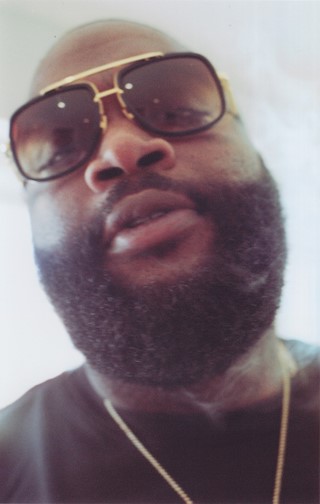 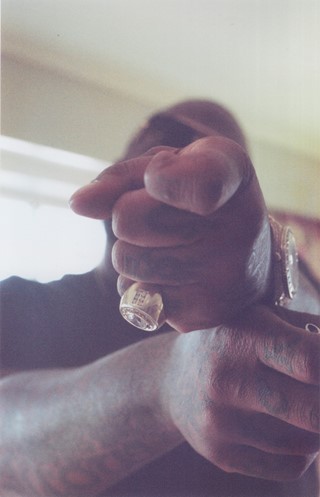 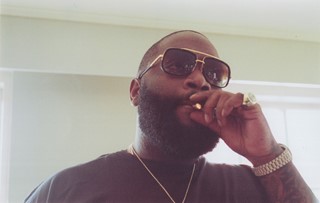 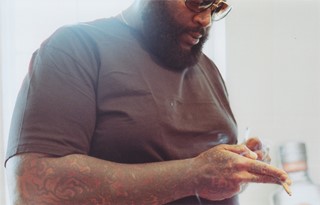 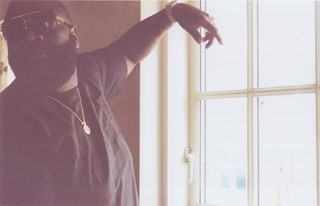 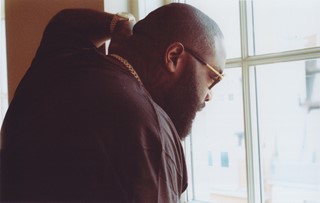 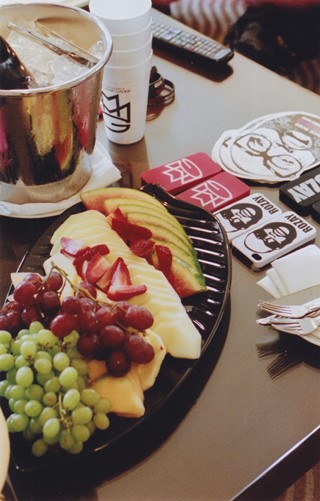 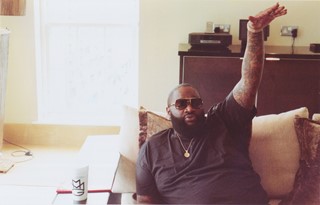 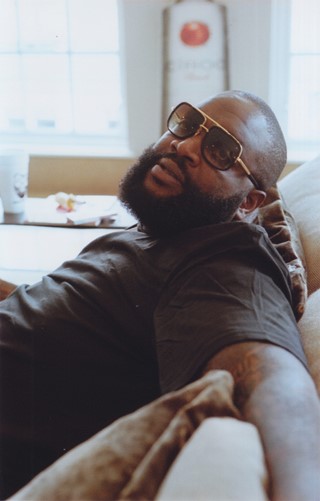 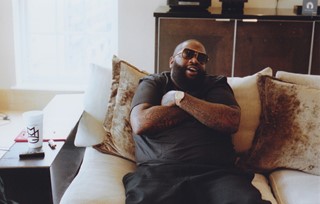 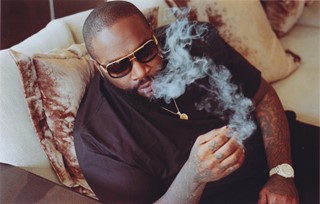 Ross calls this imperious disregard acting “like a boss”. “People from Miami,” he muses, “somewhere in the back of our mind we think we’re dominant or something. Even before making music I was always someone that you had to get to know, at the school if we was at school, or elementary. You may wanna know me because I walk the hallways.” Was he hustling even then? “It was more muscling then. I would take your pizza. ‘You’re my friend? Give me that pizza! You got that chocolate milk? Give me the chocolate milk. You don’t want it. Thank you.’” Was he involved in bad behaviour? “Oh yeah. Expelled and shit. On (Mastermind opener) ‘Rich Is Gangster’, I’m talking about a good friend of mine, Jabar, and I talk about him being Muslim. I watched him pray five times a day.  I watched him hustling and selling AKs, and he was indicted when we both was 18. His father received 30, 40 years for heroin. So when I make music and talk about graphic shit, I’m just relaying messages. And these messages could maybe one day save your life.”

“Even before making music I was always someone that you had to get to know, at school or elementary. I walked the hallways. I would take your pizza”

Puffing on a second swisher blunt strong enough to grant a contact high, he continues: “When you listen to a record like ‘BLK & WHT’ (also from Mastermind) I’m telling you, ‘Young nigga black but he selling white / Twenty grand a night if you can get it right.’ And that’s what it is. We didn’t have pools, but guess what? I’d see a Mercedes with rims pull up. My homeboy’s dad had a fucking curly perm and a fucking Rolex with nugget rings, like some shit off TV. And he was the first motherfucker that ever gave me a $50 bill. So that put my mindframe as like…” He pauses. “I am a good person. I am a good person. I wish you the best. I actually pray for you. But there’s a side of me that will not settle for having less. I knew that I wanted things. I knew that I wanted to be a millionaire. Before motherfuckers even knew what a millionaire was, I said: ‘Imma be that.’” He repeats this, softly, almost to himself. “Imma be that.”

From his first album’s first single, “Hustlin’”, with its immortal opening line, “Who the fuck you think you’re fucking with? / I’m the fucking boss”, his persona has been an essay in boss-ness. Throughout a career that now spans ten official albums and mixtapes, a clutch of compilations and more appearances than you can count, he has been rapping about the nature and act of being dominant. In the rap game, in the crack game, wherever, whenever, from his solo albums to the growth of his label Maybach Music, it’s a legacy of wall-to-wall anthems about making anthems. This has made him a rich man – Ross is the CEO of a $35 million dollar brand, the brand of Rick Ross, and like any CEO he knows how to avoid a question with equanimity. He won’t storm out or refuse to answer a question; he’ll just make it pointless to pursue. When we try to pick out details about his brand new film project, all he’ll say is “It’s written, directed and financed by our team. Us.” When we ask if it’s biographical, he just says “not at all”, then stares at us till we change the subject.

Still, his last two years cannot have not been easy, no matter how bossy he is. There was a health scare in late 2011 when he was taken into hospital twice in six hours – famously announcing himself fine and well with a selfie from a branch of his own chicken-wings chain, Wingstop – followed by a seizure in April 2012. Doctors ordered him to rest – he was apparently sleeping less than two hours a night. His Rolls-Royce was targeted in a vicious though injury-free drive-by shooting in January 2013 (the perpetrators were heavily rumoured to be the Gangster Disciples, a Chicago-based gang who took offence to Ross’s lyrics about their founder). Then, in April 2013, he rapped the following lines on Rocko’s “UOENO”, one of the year’s best beats: “Put molly all in her champagne / She ain’t even know it / I took her home and I enjoyed that / She ain't even know it”. Reebok unceremoniously withdrew their sponsorship of him and he was forced to apologise – for any offense caused, for the “misinterpretation” of the lyric, to anyone who ever, in the words of his statement, “felt the sting of abuse”. He was still apologising on his radio appearances that day, and his team advised me, good-naturedly, to avoid that line of questioning.

"Were the 90s rap's golden age? For me it's not even a debate. If we’re going to be fans first, we’ve got to keep in mind the pinnacles. Some people need to be educated”

“We all got plans, we all got ideas,” he says later. “Plans are free. You can make as many plans as you wanna have, but it’s the actual execution that separates us.” So what is he executing with Mastermind? Though his face and person have barely changed, behind the sunnies, Ross is seasoned. Although his debut album, Port of Miami, was released in 2006, he first came up in the 90s, like many of the rappers he shares a household-name bankability with: Eminem, Kanye West, Jay Z. Mastermind is indebted to the era of booms and baps;  key track “Nobody", produced by Diddy, is even based on a Biggie Smalls album track. “Were the 90s rap’s golden age? For me it’s not even a debate," Ross says. "When I think about classic albums, I think of AmeriKKKa’s Most Wanted by Ice Cube. You saw Bad Boy, you saw Death Row, you saw Rap-A-Lot Records, you saw Murder Inc. If we’re going to be fans first, we’ve got to keep in mind the pinnacles. Some people need to be educated.”

Ross has had his fair share of tussles with other rappers, from 50 Cent to Eminem, but he buried a longstanding hatchet with fellow southern rapper Young Jeezy for “War Ready”, one of the most noted collaborations on Mastermind. In many conferences, he has spoken about the wider rap world and the message. “It’s about the culture, “ he says now. “This shit was bred in the inner cities. This shit was bred on the corners, and the same corners we go to now. Violence has always been a part of everything we’ve ever done. But (the beef with Young Jeezy) wasn’t about the business.”

"When we all standing in front of the club with our hazard lights on, just telling the valet, ‘We’ll give you $2,000, just keep them right here,’ it’s about unity"

Again: business. Within Ross’s world, money is a lingua franca – a frame and a reason and a value system. “I wanted to be the one to introduce niggas to Napoleon Hill, you know?” he says of the album’s concept. He mentions having enough to pay for chlorine to clean a pool in almost every interview in London, and even sweetly daydreams about brokering a deal for a tour between Tupac and Biggie Smalls. Is this all just about glorifying himself? “Naw. It ain’t fun, just one Rolls-Royce. It’s better when it’s six and seven. When we all standing in front of the club with our hazard lights on, just telling the valet, ‘We’ll give you $2,000, just keep them right here.’ It’s about unity. It’s about teamwork.”

As he records yet another cue-up for yet another radio station, he’s surrounded by people. People to order his wings, people to watch his car, people to reposition his mic just so, people to ask him questions and people to make sure the wrong ones aren’t asked. Some have been with him since day one; some are so new they get giggly when they first hear him say “bawse”. And at the centre of it all is one guy with his head down. An American man, hard at work. In the offices of Kiss FM, surrounded by Styrofoam cups printed with “The Untouchable Maybach Music Empire”, Pucci is reminiscing about Ross’s first ever live appearance on the mic, at a party. Was he always like this? “Oh, for as long as I’ve known him”, Pucci says. “From day one.”

Mastermind is in stores now