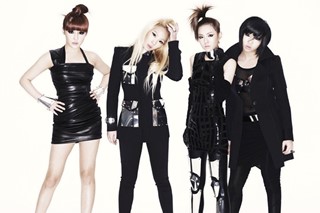 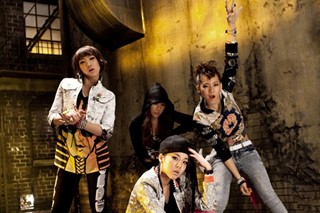 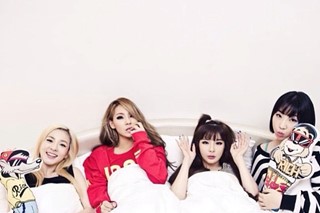 2NE1 do not play by the rules. Since debuting in 2009 they've become one of K-pop's most recognisable and internationally celebrated groups. Despite being put together with the same lazer-eyed accuracy that marks K-Pop's rigorous selection process, the word 'manufactured' feels misused when referring to Bom, Dara, Minzy and CL.

The notion of 'girl power' might be old school to the West but until 2NE1 stamped their studded heels down, female K-Pop acts felt more like candy coloured day trip for little girls or a skimpily clad, ajhussi pleasure fest. Experimental visuals sit alongside big, bold concepts that allow 2NE1 to demonstrate both strength and femininity, while in CL they have a leader both outspoken and encouraged to be, a rarity for the South Korean entertainment industry. Their first, and so far only, full studio album was in 2010 and despite repeated hints and rumours of an October 2013 release, 2NE1 are keeping everyone hanging.

This fleeting London visit saw their first ever live UK performance; another tease for their fandom, the Blackjacks, who took to Twitter on November 4th to voice their impatience for new material. It might have trended worldwide but guess what, the official line is as vague as ever, no matter how hard you ask. And really, we did ask.

Dazed Digital: Fans have been waiting a very long time for your return but it keeps getting pushed back. What, besides CL's solo, have you all been doing and why has this new album taken so long to come out?

Dara: After releasing “I LOVE YOU” we immediately went on a world tour to meet with our foreign fans which pushed back our album plans.

Bom: Before our (summer) comeback we continuously recorded songs, maintained our health by working out and decided what kind of items and concepts we should wear and do for our new single. We were working hard to prepare for the album.

DD: A brief snippet of 'Falling In Love' was heard in 2012 on the Korean music show Inkigayo - did it feel strange that after an entire year of holding onto this song it finally came out... were you not impatient?

Minji: As much as our fans have been waiting for us, we also couldn’t wait to release new material.

CL: We made an active decision to prepare for that comeback like it was our debut. We wanted to work as hard as possible and prepare as much as we can. We worked on a lot of material and “Falling In Love” came out at a time that fit the summer season.

DD: The 2NE1 image has softened down overall of late, was that a refreshing change from your previous concepts and what brought it about?

CL: It wasn’t an attempt to break away from that fierce concept we are known for; it was something that came about naturally. We recorded fun tracks and decided to show a different side of ourselves that was more pleasant. We did have to adjust a bit to this performance aspect and even asked ourselves, “Are we really allowed to smile like this on stage?” We would be happy to know that the audience can get a good vibe and feeling through watching this performance and we all felt comfortable in this concept.

DD: What's the biggest artistic difference between the 2NE1 of your last major album release in 2011 and this new album?

CL: It’s hard to reveal all of the exact differences since we have yet to release the material. However, I can assure you that you will see the fierce 2NE1 that you have seen on our past releases but also a more developed and evolved 2NE1. We’ve definitely evolved on this album and can’t wait for everyone to hear it.

DD: In the time you've been 2NE1 each member has grown up and matured but who has shown that the most and in what way?

Bom: I think Minji since in her case she has been dealing with this lifestyle much earlier in her life and as compared to her friends, so as a result I think she has developed strong mentality through this process.

Minji: I turned 20 this year, so I am planning on expressing my maturity in our performances and I hope that the fans look forward to it.

We did have to adjust a bit to this performance aspect and even asked ourselves, “Are we really allowed to smile like this on stage?”

DD: 2NE1 have often been held up as "ambassadors" of K-Pop for the international market - did you ever see yourselves as that? And how did you feel about that role being given to you as a group?

CL: I’m thankful for it. We honestly just wanted to create the best music as possible and if the fans in the international market embrace it, we are grateful and appreciative. We feel like we should repay our fans with better music. Every time we release an album I think to myself “How should we make our fans happy?” I hope you guys enjoy the upcoming releases.

Dara: I believe there is a way of exchanging greetings with these foreign fans when we do overseas performances. I want to develop those skills gradually so that we can get closer to our international fans.

DD: With such a long time between albums there are a lot of eyes back on the group - do you feel the pressure to make your comeback a success, and how do you deal with that ?

CL: I believe now is the time to take everything to another level. It’s definitely a challenging task, but as long as we have to deal with this fact wouldn’t it be better to do it with a positive mind? I believe that if I enjoy the process I will be able to have good results and overcome the hardships.

DD: How do you personally measure your success as an artist? Through sales, chart positions, critical acclaim, fan reactions?

Minji: Indeed if we have good result on the charts we will be thankful and happy for it. However I believe it is more important that the fans have an interest and love for us than our chart numbers.  There is no better feeling than when people tell me “I really like your songs” or hearing our songs everywhere we visit and also enjoying the songs ourselves.

DD: Do you read your own press? What are your thoughts when you read something that's unfavourable or critical towards you... can you switch off your emotions or does it affect you?

Dara: It can be hard for entertainers to be commented with positive reactions in a way.  I believe that negative comments are kind of an interest for people. It is more important how to apply these criticisms constructively so that I can focus on developing my talents and skills.

Since we 2NE1 have shown powerful performances through songs so people think that we have fierce personalities, however this is not true

DD: You worked with producer extraordinaire Teddy again... how has the working relationship evolved between producer and group? How much input do you have towards the 2NE1 sound/lyrics?

Dara: Our producer Teddy is like a magician because he helped us derive our unique characteristics since we debuted with ‘Fire’.  It is the same for ‘Falling in Love’. Since that single was different from our previous styles he adjusted the track to fit us better.  He is a person who gives us good advice and supports us in every single way.

CL: Above all, his songs have heartfelt words of gratitude. We work together to come up with the concepts and make sure that they are honest. We also worked together closely on writing my solo single “THE BADDEST FEMALE”.

DD: What is the biggest misconception that the fans or media have about 2NE1?

Dara: Since we 2NE1 have shown powerful performances through songs so people think that we have fierce personalities, however this is not true.  Especially CL who is very feminine when she is not on stage living as Chaelin (her real name) - she enjoys meditating and cooking.

DD: CL, you wore a white swimsuit outfit on a music show for your solo promo and came under fire for it, yet male idols routinely bare their bodies and their physiques are celebrated... how do you feel about the double standard going on here? Should (and can) views like this be changed?

CL: Actually I’ve been wearing swimsuits ever since we debuted. The outfit that I wore at that time was a one piece swim suit with a belt on - it was not a two piece swim suit. Whatever you wear as long as you are devoted to the music and express it with your own heart, you should stand by it.

DD: When you made your comeback in the summer your fans made much of that, announcing that the Queens of Kpop were back... when you hear something like that, what's your reaction?

Dara: I know that it’s not easy to wait for 2 years and I really thank our fans that have been constantly rooting for us and loving our new single. It was a refreshing reminder that we have devoted fans who are precious to our existence.

Minji: I know that each member has a different personality and preferences however I believe that the main reason why 2NE1 is loved both domestically and internationally is because of our music.  I will always do my best to repay all of our fans by being amazing on stage.