Summer, 2013, and London is in the midst of a rare, long-overdue heatwave. Parks are littered with tatty spliff-ends and bins overflow with drained Red Stripe cans. The air is thick with the smell of barbeques drenched in tangy lighter fluid and nearly everyone has a smile on their face, even if they’re melting. On the hottest day of the year so far, 18-year-old Archy Marshall is pottering around his mum’s house in East Dulwich. Given that this rake-thin teen is behind the dubby urban hymns of King Krule, when we arrive we’re expecting a sullen, jaded-beyond-his-years figure, a glum figurehead for today’s disenfranchised youth. Instead we’re greeted by a cheerful – albeit slightly stoned – character cutting  a vibrant dash with vivid red hair and a lurid green-and-blue African-print shirt. It might be the weather, but Marshall certainly isn’t the moody, troubled teen we’d been expecting. 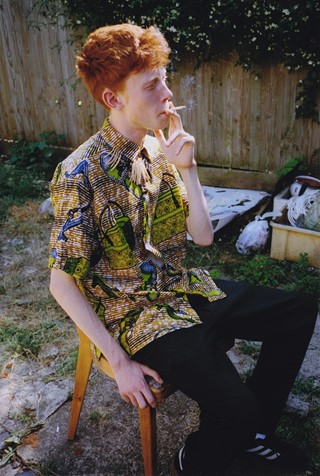 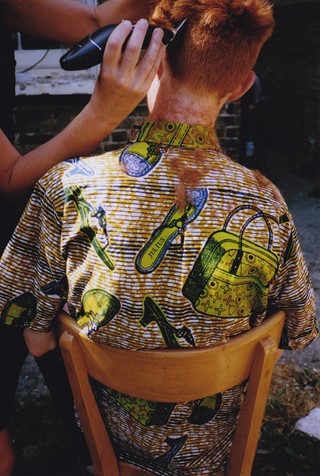 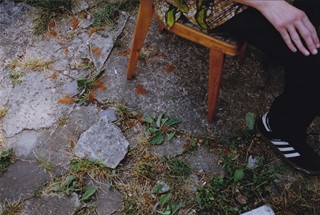 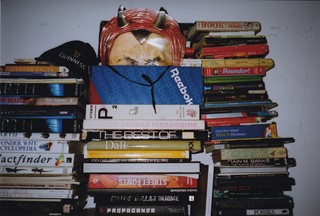 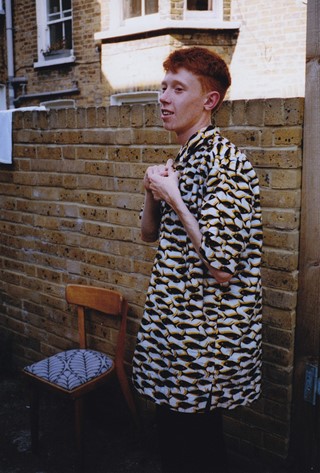 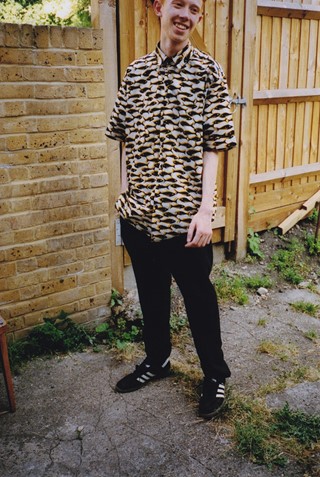 When we arrive, he and older brother Jack, creator of the artwork for King Krule’s startling, sweltering debut album, 6 Feet Beneath the Moon, are in the garden with a mate. The gang are gathered around a half-eaten pizza and a knackered-looking dog, while Archy’s mum chastises them over the pungent smell of weed drifting through an open window. A costume designer – she worked on the video for P.M. Dawn’s “Set Adrift on Memory Bliss” – she coaxes her son into the front room via her studio, where a vintage Singer sewing machine is set up and a host of  fabulously printed shirts, just like the one Marshall is wearing, hang up near boxes of pins and pattern paper. “I was born in this house, on the same mattress that’s in my mum’s room,” begins Marshall, who for the past eight months has lived on his own above a dry cleaner’s in nearby Surrey Quays. “It’s always been my dream to be up there, because it’s near the river. I just like being near water,” he adds in his booming baritone, casting a light on his own starry-eyed take on local psychogeography. “Even up the road from here there’s one of the best views of London, literally on this road – you just walk up this hill. That’s where I spent a lot of my teenage years, contemplating things. It’s very romantic.”

“I respect my shit! I’m usually the guy who goes to parties and no one likes because of that shit. If you’re looking to have a good time, you don’t want to worry about your shit” – King Krule

Inside his own flat the walls are covered with art by his brother, dad and uncle, all of whom are painters. “It’s very abstract – not really with brushes,” he says of his dad’s work. “I grew up with those images in my head. It’s quite obscure.” The artistic impulse is strong in Marshall, who draws as well as making music. Inspired by Frank Miller and Charles Burns, his illustrations are in the classic graphic-novel style of thickly lined black-and-white etchings. Currently he and his brother are working on a comic called Ooz, the title taken from a band the two of them are in, Dik Ooz (one of Marshall’s aliases, Zoo Kid, spelt backwards). Right now he’s working on a piece about canine collectivism. “It’s got loads of different levels,” he says. “It’s sort of about a dog who has to sort out a dog revolution, and the CIA create a dog to suppress this revolution. So there’s these two almost science-fiction, superhuman dogs that wear suits. Between them they realise that they can take over the humans.”

The comic might have to go on the backburner for a bit though. After years of online releases and one-off vinyl projects, King Krule’s long-awaited debut full-length is coming out this summer on True Panther Sounds and XL. It’s an album that couldn���t have come from anywhere else but London. “I can’t describe why it comes through but it’s definitely there,” says Marshall of the inescapable presence of the city in his sound. “It’s an essential element of it.” A marvelous muddle of jazz, soul, reggae, blues and classic British singer-songwriter brusqueness – from Billy Bragg to Jamie T – the record has its roots in the soundtracks to the parties that his mum threw when he was a little kid.

“I never wanted to go to school. I’d wake up and think, ‘Fuck that.’ I went through quite a few establishments that weren’t great for myself – security units, youth-offender places. I guess that was going to the lions’ den” – King Krule

In the very house we’re in now, 1210s would be set up downstairs and the place would shake to hip hop and ska as people poured through the small terraced Victorian house. “I just remember the vibe of waking up with bottles everywhere and people sleeping places. And the night-time, just being loud in my room, sort of going down every now and then and seeing the chaos – it was good to grow up around it,” he remembers with a smile. “It was dub, ska, a lot of Jamaican music, a lot of dancehall. It was the late 1990s. Dancehall in London was really, really popular at that time, especially around Brixton and these ways.”

So does Marshall ever plug into his lineage and put on his own rowdy house parties? He shakes his head vehemently before ashing his post-lunch joint into his trainer. “I respect my shit! I'm usually the guy who goes to parties and no one likes because of that shit,” he grins. “I guess I assumed it bought more trouble than good most of the time. If you’re looking to have a good time, you don’t want to worry about your shit.

Your domain is your domain.” So your own place isn’t a party house? “It is but it’s controlled, y’know? I got landlords now. It’s fucked.”

The samples and bedroom beats at the core of Marshall’s distinctive yet comfortingly familiar sound are underpinned by the bassy wobble of his guitar. He got his first, a cheap Squier Stratocaster, as a Christmas gift at the age of eight, and started out by learning Led Zep and Jimi Hendrix riffs. “I sold it to get another guitar a year later and I kept selling it until I got a good guitar,” he explains. He made his first “shit” song as soon as he got that first guitar, but it wasn’t until a few years later that he decided he was any good at writing them. “I guess from 12 onwards I was always into my music.” Since then he’s written, he estimates, around 1000 songs – “That’s not an understatement” – and made his most recent tune just this morning.

“Even up the road from here there’s one of the best views of London, literally on this road – you just walk up this hill. That’s where I spent a lot of my teenage years, contemplating things. It’s very romantic” – King Krule

All of this creation went alongside some turbulent early teenage years. “I never wanted to go to school – I’d wake up in the morning and think, ‘Fuck that.’” Five years ago, prospects for Marshall looked bleak. “I went through quite a few establishments that maybe weren’t great for myself – security units, youth-offender places,” he recalls. “I guess that was going to the lions’ den. Social services said you’ve got to go to some sort of school.” So at 14 he wound up at the BRIT School in Croydon, the performing-arts college famed for such chart-dominating alumni as Adele and Amy Winehouse. “It was like a saviour. If I got into that school it would prove a turning point in my life. And I did, and so it was.” At 16 he then came to another crossroads. “I got alright GCSEs, but I was lost. I didn’t know what to do, whether to continue with education, go to uni, go to art school – then again I was like, ‘Maybe I should just go and get a job, start early and make money.’” Happily, interest in his music picked up. True Panther Sounds released his self-titled first EP, and he decided to pursue his creative endeavours full-time.

At the start of this year, Marshall took his home recordings into the Press Play Studio in Bermondsey to begin work on 6 Feet Beneath the Moon, the title of which relates to “being submerged, almost in a coffin underneath your ambitions, your aspirations. I think it sums up the last 18 years quite well for me.” He worked with XL’s in-house producer, Rodaidh McDonald, and also developed a fruitful relationship with Press Play’s in-house engineer and owner, Stereolab drummer Andy Ramsay. “He really sparked something into my music. He was around when we recorded a lot of the later stuff – that really made the last few months of recording flow so much better.” Of the 14 tracks on the album, Marshall’s current favourite is “Cementality”, a coolly paced meditation that brings to mind a southeast London Gil Scott-Heron and was written in the studio on Ramsey’s Wurlitzer. The oldest track on the album is the hustling, throbbing opener, “Easy, Easy”, which first featured on Marshall’s early $quality mixtape from back when he was recording as Zoo Kid. “It’s quite a simple, naïve song and that’s why I like it,” he says. “It sums up all the years before I started thinking more and more into music.”

It’s no accident that the album is set for release on Marshall’s 19th birthday, August 24. “That was planned,” he says. “It’s clear cut – it’s 19 years of music. From birth to now.” Enlisting various members of his family, Marshall shows us a huge printout of the record’s stark artwork, draping the massive banner down the back of the house. Marshall and his brother are soon to paint a similarly epic version of it on the side of the XL building in Ladbroke Grove. “They’ve got a big ‘xx’ on it.” Are you painting over that? “Nah, we’re not allowed!”

6 Feet Beneath the Moon is heavy with notable sonic references, from Joy Division – “my dad showed me Unknown Pleasures but he didn’t listen to it a lot. He listened more to New Order” – which opened him up to art rock and post-punk, through to Ian Dury and the hepcat swagger of Chet Baker. Jazz, he says, is a key influence. “Jazz is more raw than punk in a lot of ways,” explains Marshall. “It’s so expressive. A lot of people say to me, especially older people, ‘It took me ages to get into jazz.’”

Since coming into the public eye, the distinctive-looking Marshall has found himself getting stopped by fans when going about his day-to-day business. “Some of them are really cool – I met one in Tesco’s in Surrey Quays and we ended up going to a festival together.” However, he’s not keen on being seen as a quick Instagram opportunity. “There’re some people who ask for a photo and don’t say anything else. That’s a bit more of a pisstake – they don’t even say hello. I’m not an image.” Just an image? No. A modern London icon in the making? Certainly.