Pedro 'Busy P' Winter, Daft Punk manager (1996 to 2008)
Back in 1995, Daft Punk were kind of my heroes. I met them for the very first time at Ministry of Sound in London that year, and their live show blew my mind. I ended up drinking champagne with them backstage - a French reunion! The day they asked me to work with them in 1996 was the turning point of my life. I can easily say I am who I am today thanks to Daft Punk.

So yes, Thomas and Guy-Man are heroes, and musical geniuses for sure - who dares to doubt that? From 1996 till 2008 I knew I was living something special with Daft Punk. 12 years of "pinch-yourself" I'll say. But I had to have my own adventure, and so I created Ed Banger records 10 years ago.

Daft Punk are not just an influence to me, but kind of like Teachers in their own right. Their song "Teachers" from their Homework LP acted as a "who's who of house music" for me! On the track they are just reading out their favourite DJ's and bands through some vocal processing over the music… I remember writing down the names of all the artists mentioned in the song & slowly I acquired music from most of them… Some of them I didn't acquire until recently - I was touring the US with Chrissy Murderbot and he gave me a folder of old booty house and juke… In the folder I found Jammin' Gerald and Waxmaster who I instantly remembered hearing mentioned on "Teachers". I really liked the tracks by both artists too...I think this was a really cool thing, that years later I'm still learning from Daft Punk. The fact that they bought samples in house music to the forefront of world pop music was a huge inspiration to me. Artists like Armand Van Helden, Kenny Dope and Masters At Work were doing that too before, but were not getting the worldwide recognition on a strictly pop level. I think this is because Daft Punk made the music more digestible with easier arrangements on the songs that they knew had potential. I think they mastered this on their "Discovery" LP. One of my favourite records of all time.

Egyptrixx
Daft Punk's sense of fantasy and imagination is what I have always enjoyed most - the narratives, characters and conceptual playfulness has been the perfect backdrop for their songs. Along with Leiji Matsumoto, Michel Gondry and Spike Jonze they built this amazing world around their music.

Hyetal
I watched a lot of MTV as a kid, I’m just about old enough to remember when they played some decent stuff. First time I heard daft punk was when I saw the video for ‘Around The World’,  I really liked it. I went to a record shop to listen to the album but I didn’t really get it, I still a bit too young to have any frame of reference for dance music.

By the time Discovery came out I had successfully snuck into a few clubs so had a bit more of a understanding of that side of things. I loved it, I still think it’s a much more complete record than homework, and the fact it really worked as an album was what got me into it at the time. It was probably the record that kicked off my obsession with drum machines and tracks like ‘something about us’ and ‘short circuit’ helped spark an interest in listening to 80s soul and boogie stuff.  I got into homework retrospectively and still listen to both albums quite a bit.

Haxan Cloak
Daft Punk have influenced the way I make music in more ways than I even know. They're use of distortion and compression is an invaluable lesson. The distorted synth line on 'da funk' is (obviously) great. The way in which Daft Punk will often take sounds that are accessible and recognisable but then twist them in only a way in which they can, to make them 'Daft Punk' signature sounds is one of my favourite things about them, and something which I try to echo in my own music. They take ordinary, everyday sounds and decorate them with their own uniqueness. This is what makes Daft Punk so special.

Cayucas
In around 2007-2008 I decided to move to Tokyo and teach English for one year. My friend is of Japanese decent and she knew a woman I could stay with, and offered it as a way to save money. I took her up on that offer and ended up in the small town of Higashi Koganei off the Chuo line. When I arrived to this house where I'd be staying for an entire year I remember it was rainy, cold and I felt a little bit lonely. I quickly acclimated myself and passed out in her sons room which had been untouched since he left for college about 10 years ago. When I awoke I started snooping around and noticed he had an amazing cd collection. It was very eclectic from The Beatles to Radiohead. I pulled out a double CD by Daft Punk, which was Discovery, maybe a special Japanese edition and started listening. I remember loving the album so much. I was a bit angry I hadn't really listened to them much up to that point. What I love about D. Punk is that they combined old school funk w/ electronic dance and it ends up being the perfect fit. I think the genius is the branding, these sort of robotic men who came to earth to push buttons. I ended up seeing them live about 6 months later, and that was the tipping point for me. Definitely one of my top 5 bands of all time.

Brolin.
Daft Punk seem to exist in this self-nurtured world of persistent organic creativity - way beyond the commercial boundaries of the prosaic collective psyche. They display a joy in balancing the accessible with the innovative.

Friendly Fires' Jack Savidge
My step brother bought me Homework for Christmas when I was 12. I loved 'Around The World', but I think I played it all the way through just once initially- those aggressive, squealing synth bits in 'Rock 'n' Roll' and 'Rollin' and Scratchin'' scared the living bejesus out of me. There's something wild and evil in those tracks. It was only when Discovery came out that I revisited it, and properly exorcised my fears. Since then its never left my CD wallet, iPod or DJ box, and I hope that right now Homework's freaking out some timid kids who like 'Get Lucky'.

CFCF
I can't remember if I bought Homework on cassette first or Dig Your Own Hole, but it's definitely Homework that's impacted me most. I think for everyone else I knew it was just a novelty. I remember poring over the liner in the backseat of the family car -- the countless DJ shout-outs which, as a 10-year old with a dial-up connection, I'd never be able to catch up on; the vintage desktop photo wherein an issue of Playboy was hidden beneath Chic records and Iron Man comics -- this allowed my young brain to share a nostalgia that was foreign to me while also showing me a way of using it to look forward.

We were introduced to Thomas & Guy-Manuel at the Coachella Festival right before their video happening along with Pharrell. It has been great meeting them and having a chance to discuss, to learn that just like we do, they don't actually listen to a whole lot of Electronic Music but are more influenced & stuck with vintage music like Soul & Funk… from the past years. We're excited to take the time to listen to their full album and by the way, the new video teaser they've just released today is awesome !

Share your #daftpunkmemory on Twitter to win a signed copy of our Daft Punk December 2010 3D issue. 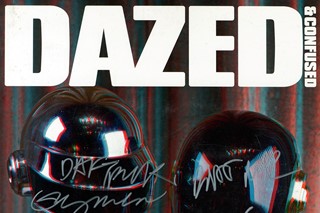 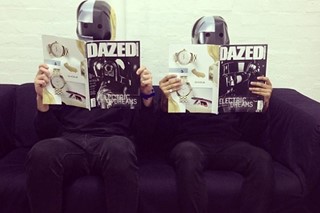