The electro and house icons grill each other about their sampling secrets, love of Björk and luxe pizza toppings 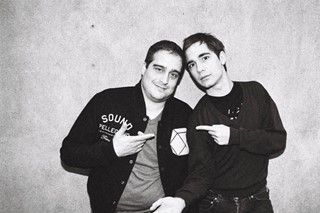 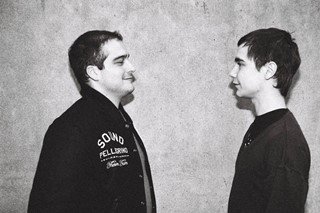 The French electro wunderkind of 'White Knight Two' fame on Institubes, co-founder of Marble Records and one half of High Powered Boys met one of his heroes, the legendary American house/garage producer Todd Edwards to collaborate on various remixes back when.

I usually just browse random websites for ten hours waiting for something to pop up in my mind [for inspiration]… it never works but I keep doing it.

Now Surkin and Edwards have taken on a full EP on Sound Pellegrino as the third release on their Crossover Series, brimming with hi-NRG classic house vibes on an electro tip, complete with retro vocoders and catchy synth-lines. Here the two go head-to-head in an exclusive interview about their sampling secrets and truffle pizzas...

Surkin: What's the most unexpected stuff you've ever sampled?
Todd Edwards: I've sampled Irish folk music as well as some music styles from the 1920s—1930s.

Surkin: Did you ever had any legal problems with all that sampling, even if it's almost impossible to recognize the original tracks?
Todd Edwards: I've been blessed not to have any problems. When I was younger I'm sure there were samples that might be considered more of a risk to use, but I layer samples so much, that they become something else. At present, I'm a bit more cautious, but I know what's a risk and what isn't a risk.

Surkin: You just moved from New Jersey to Los Angeles. How is SoCal treating you so far?
Todd Edwards: I love it! I've had a constant smile on my face since I've been here. Waking up to sunlight everyday is such a change from NJ. In addition, I've met great people and have made a lot of friends.

Surkin: You started DJing relatively recently. Did it change the way you're making tracks?
Todd Edwards: It made me more aware of what works in a club, and what might be more of a track to listen to. Even if it's music for dancing, some tracks just have stronger energy for club play.

Surkin: Anything you've never been offered and you'd die to remix?
Todd Edwards: I'm still looking to remix Björk. Out of everyone I could remix, I really would consider it an honor to remix one of her songs.

Todd Edwards: If you had to chose a completely different genre of music to make what would it be?
Surkin: Viking Metal most definitely.

Todd Edwards: If I give you all my trade sampling secrets, will you teach me to put together one of your amazing DJ sets?
Surkin: To put yourself in the adequate mindset you have to be careful with the amount of vodka you have beforehand. It has to be exactly one unit past 'way too much'.

Todd Edwards: Can you ship me out some of that truffle pizza we had when I was over there? I haven't had any pizza that compared to that since.
SURKIN: Ah, Al Taglio! The best pizza place in Paris. I'm eating there way too many times a week. I'm not sure how well the truffle pizza would handle a transatlantic flight though. And the experience wouldn't be complete outside the 11th arrondissement. I guess you'll have to come back.

Todd Edwards: What do you listen to for inspiration?
Surkin: It varies a lot with time, but right now a lot of Rap and R'n'B music. And some weird Japanese video game music.

Todd Edwards: Do you ever have times when you are not feeling creative? What do you do to remedy that?
Surkin: I usually just browse random websites for ten hours waiting for something to pop up in my mind… it never works but I keep doing it.