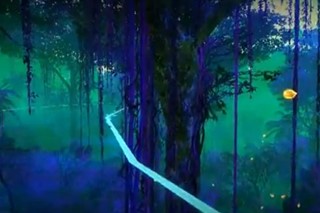 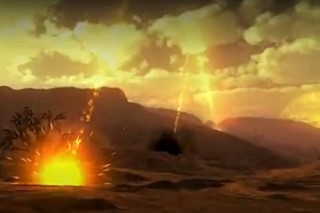 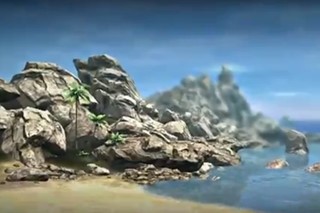 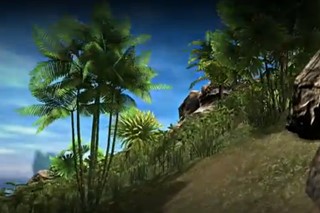 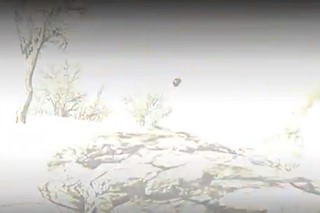 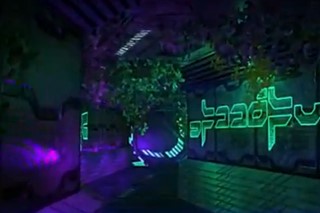 Enter the realm of Gatekeeper: a first-person audiovisual voyage through a seamless, cineplexscaled, techno landscape wrought in glossy HD. The product of the fertile imaginations of New York electronic duo Aaron David Ross and Matthew Arkell, this sonic vision has been brought to virtual life for debut album Exo by internet artist Tabor Robak. Except it’s not an album, it’s a whole new world. Exo is a soundtrack, an immersive gaming environment and a language in the form of downloadable font, the three so tightly interwoven as to playfully blur the boundaries between art and recreation, upturning what constitutes a music release in the 21st century. Exo is next generation, now.

But what is it exactly? “To use the analogy of the level, there is a different level for each track,” explains Robak via Skype from the New York studio he shares with fellow net-artist Ryder Ripps. Working closely with Ross and Arkell, he built a game with a different interactive environment for each of Exo’s 12 tracks. “For ‘Bog’ it’s a bog,” he grins. “For ‘Dromos’ it’s this really hot lava-rock landscape with a fiery sky.” There are mountainsides dotted with radioactive trees, liquid skies fed by an atmosphere generator, vast sulphurous lakes and abandoned industrial ruins. Robak has literally envisioned Ross and Arkell’s audio landscapes. “We’ve seen it in our heads for a long time,” says Ross. “I feel like I’m going to cry the first time I play it.”

But let’s rewind a minute. Gatekeeper was born in Chicago, where Ross and Arkell met at university, students of music and cultural studies respectively. Sci-fi freaks since childhood, their early music worshipped at the altar of John Carpenter, as they dredged doomed fantasy narratives from their synths, samplers and software. The visual side of Gatekeeper was key from the off, with a fog machine a crucial component of their live shows. Their smoke signals were picked up by the appropriately named Kompakt sublabel Fright, which released a 12” in 2009. The fledgling Thunder Horse, a crew of film and fine-art students from the same uni, came onboard to up Gatekeeper’s live-show production values to “more of a controlled lighting spectacle”. Then, when the whole friendship circle moved to New York in summer 2010, Gatekeeper’s fog’n’FX became a fixture on the local warehouse scene. But it was their debut EP, Giza, in 2010 that really got heads talking and set them off on their journey towards Exo.

“I don’t think that this is any more game-y or less filmic than Giza, I just think they’re different portals,” says Ross of Exo’s gracefully brutal synth-symphonies, which draw heavily on Hollywood sound-effect libraries. “They’re different movies for sure,” picks up Arkell. “Giza has the warm fuzziness of VHS, a tape you maybe watched as a kid. Now we’re moving towards a more immersive feel, maybe a little more science-fiction.”

Having acknowledged Giza’s VHS-ness by releasing a series of music videos on VHS tape via LA’s Hippos In Tanks label, when it came to Exo they took the natural next step. Long admirers of Robak, they involved him from the start: “We were like, we want to do something amazing with you and with this.”

“At that point my skill level in making an interactive virtual environment was much more primitive,” explains Robak. “I’d just finished making a video-gameart type of piece (‘BNPJ-EXE’, a collaboration with Jon Rafman) but if you view it you can see it’s not much better than Doom. So in the past year I’ve been trying to go from Super Nintendo to Xbox 360 in terms of my skill level.”

Making Exo became an immersive experience in itself: months of meetings and a constant back-and-forth flow of ideas, music and images. “We basically didn’t leave our apartment except to go to work for six months straight,” explains Ross. “Every night working on it, sometimes all day. We were totally incubated.” Arkell nods: “We were pretty much living Exo.”

Fittingly, the three had originally met via Myspace when Robak was still living and working in his hometown, Portland. “Friends had turned me on to Gatekeeper and we all listened to them. I guess they knew about my artwork in the same manner. There are a lot of intersecting themes in our work.” Having “tossed around jpegs and stuff” for a couple of years, the three finally met IRL on New Year’s Eve 2010 when Gatekeeper played a show in Portland. “We became quick friends and Robak came out to New York to stay with us. We had a party week,” says Ross. “I stayed up all night playing video games while they went to work,” laughs Robak. You were that guy on the couch? “Yep,” he grins.

Central to both Robak’s internet art and Gatekeeper’s music is a shared HD aesthetic, something Ross and Robak took to its most ironic-but-not-ironic extreme as members of contemporary boy-band #HDBOYZ, who showcased their song “Photoshopped” at the Museum of Modern Art PS1’s summer series last year. While their tongues might’ve been firmly in their cheeks on that occasion, their love of HD couldn’t be more serious.

“It’s definitely a response to the popularity of lo-fi five years ago and also the proliferation of affordable high-definition technology,” says Robak. “Everybody’s got high-definition TV. The basic MacBook now is a pretty good computer.” But it’s more than that. “What HD means to me,” he laughs, tickled by tweeness of the statement, “is a commitment to quality and a level of detail.”

“It ties in with the fact we’re inundated with information throughout our lives because of commercialisation, and it’s really colouring the way we want to do things too,” continues Ross. “Also, from a DIY point of view, taking corporate technology and owning it,” chimes in Ryder Ripps from across the room. “When I was 16, it used to be, ‘I can have my own zine,’ but now it’s like, ‘I can have my own feature fucking film.’”

“There’s something really funny about high-quality DIY productions,” agrees Ross. “When you create something that looks really commercial and polished and you just did it sitting at home on your computer.” They jokingly refer to the high-definition DIY approach as “HDIY” in the way all era-defining movements are made; accidentally, naturally, for fun.

“With my artwork, and in many other of my peers’ artworks, there’s this sampling of commercial aesthetics,” explains Robak. “And something that’s interesting about Exo is that it’s really a hybrid art-piece and commercial project. It’s not an art-piece sampling commercial aesthetics, it’s not a commercial project trying to look artsy – it’s a really interesting hybrid. We’re trying to push the artistic aspect to the point where it‘s confusing what kind of product it is.”

It’s a natural evolution for a generation weaned on video games. Pixellated gaming soundtracks have long infiltrated electronic music’s structures, while the consoles themselves became early compositional tools for the likes of Benga, Hudson Mohawke et al. It was only a matter of time before the inspiration became the experience.

Of course, the development of technology has played a big part in that. “These game development tools have only in the last two years become accessible to non-professionals,” says Robak. “Photoshop people can understand the interface and make their own images now. Before, the tools to make these games were so esoteric and foreign that it wasn’t accessible.” But the really thrilling thing is how the worlds of music and gaming are now colliding. Yes, there are music games, interactive music videos and Pitchfork’s recently launched Soundplay platform, which pairs songs with simple games by indie developers, but Gatekeeper and Tabor Robak’s collaboration has taken the possibilities of the artform to a whole new level.

“Everybody’s making music videos, so it’s time to figure out what the next thing is,” says Robak, cutting to the quick. “I think novelty in general is a universally good force that should always be pursued. Newness.” The appeal is obvious. “There are so many examples of audiovisual art-experiences in the world that it’s become expected,” continues Ross. “There’s a real saturation of that kind of work. This idea was a way to set ourselves outside of that a little, with a new thing that didn’t already have a set of established ways to judge it.”

How do they want people to interact with the full Exo experience? “On a really good computer...” says Arkell. “...With really expensive headphones,” adds Ross. “Ideally you forget about everybody else,” continues Robak. “You’re the only real visible lifeform, so you’re totally alone.” With all the distractions of our warpspeed lives, there’s something appealing about that. Is our future finally going to be virtual? “I think a mixed reality where you’re seeing virtual stuff just as frequently as you’re seeing physical stuff is very likely,” reflects Robak. “Flashing signs popping out of every cereal box. But people are reasonable; you’ll be able to turn that off.”

The human touch is still king: “It’s important to accentuate that this is Robak’s realisation of the environment,” says Arkell. “Obviously all of us were imagining similar sorts of environments but this is not the definitive Exo necessarily. We like the idea of our music being imaginative in the sense that you can retreat into your own experiences.”