The famed footwork DJs speak to us about their influences across Chicago house, soul and techno alongside an exclusive giveaway of Rashad's 45fiftyfour banger 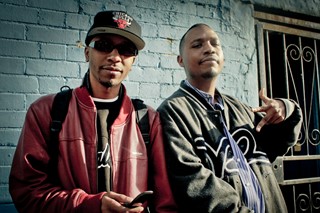 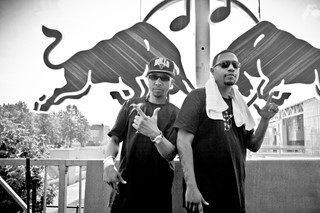 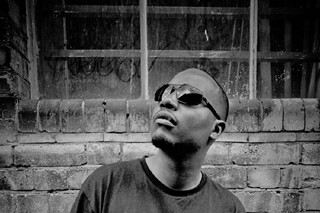 At 160 beats per minute, and with an unrelenting output of material to date, DJ Rashad and DJ Spinn are hurtling towards wider recognition with the release of the first album on their newly-formed imprint, Lit City Trax. Proud products of their environment, each of the tracks featured on 'Teklife Vol. 1 - Welcome To The Chi' channel different aspects of footwork's birthplace Chicago, accomplished by reinterpreting the make-up of the city's musical DNA - soul, techno, house - compressing it all into a genre they can truly call their own. The 20 tracks featured on the album is a spectrum and, in turn, a masterclass of what this emergent genre is all about. One of the twenty tracks, 'Kush Ain't Loud', is a stoner's anthem in the making, too. We spoke to Rashad and Spinn about riding high on a wave of fervent expectations from their new project.

Dazed Digital: How'd you get started? Tell us how you started off DJing and producing. How long have you been making trax?

Rashad: I started messing around dancing in 5th or 6th grade. By the 7th grade, I was mixing on a pair of 12"s my cousin had. At the end of 8th grade, like summer of 2004, beginning of freshman year I was getting into producing.

DD: Who and what influenced you to dance, DJ and make music back then?

Rashad: As far as the music, it was a lot of Ghetto House influencing us: DJ Deeon, DJ Milton. As far as dancing - I don't know. Dancing was a real regular thing back in the day. Everybody was dancing. I saw House-O-Matics killin' and after that, I was set on getting in. Once I made the cut, I met Ant Brown and he took me to the ultimate level. I learned from the best. Dancers like him and Starky and a few others developed a lot of the moves that we were hitting then and still do to this day. People were dancing before Ant though.

DD: Could you explain the evolution of the sound? What instigated the music to speed up to 160BPM?

Rashad: That pretty much came from Traxman and the Geto DJ'z. DJ Silk, DJ Roc Obama, DJ Ice Mike, DJ DJ etc at Club Xavier's in '97-'98. That was happening out on the west side of Chicago period. It was always faster out West. Going to all the parties, we got accustomed to that.  A lot of Footworkers, on the south side, told us it was too slow. We all started doing it then.

DD: The music has taken on a life of it's own. The sound is informing club music all over in many different forms. Have you drawn an influence from your travels?

Rashad: Fortunately, the audiences everywhere are getting it. We've changed it up since we've been touring.

Spinn: We've been exposed to all types of music we hadn't heard. So it's only natural that we vibe off of all the music we hear and take those vibes back to the studio.

Rashad: And there's a lot of new music coming out that is Juke influenced that's in heavy rotation.

DD: Why was it necessary to start Lit City Trax?

Rashad: It was something that was brought to our attention, that it's time to get something going. My manager, J-Cush, when we started working with him, talked about the positives of us running our own imprint. Spinn, J and myself run and maintain the day to day. It's good to sometimes be in a situation where we could be free to make our own choices. Basically, good for us to be in full control

DD: Could you tell us more about the Teklife series?

Rashad: It is a multi-part series. I was the first to start it off. Next is Teklife Vol. 2 by DJ Spinn. Then it's The Manny 'N Rashad Show, Traxman, RP Boo, Earl, Boylan, Tre. We got more up our sleeve from outside the camp. Stay tuned.

DD: Where can we catch you live?

Rashad: We're on tour for another week. You can catch us on a live stream at the Lit City Trax takeover of Just Jam on DontWatchThat.TV this Wednesday. Manny and Bulb are gonna be footworking live. Manny and J are goin to mix too. Wednesday night we're all at the Hyperdub event at Koko. Thursday we're in Helsinki and Friday we're at Glade festival playing back to back with DJ Spinn. Well be back on tour in August. Traxman will be back around then too.

muteunmute
max volume
Update Required To play the media you will need to either update your browser to a recent version or update your Flash plugin.
MusicIncomingTechnoDJ Rashad