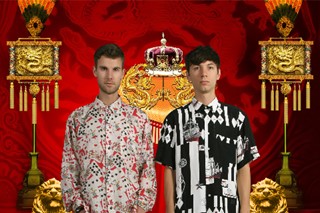 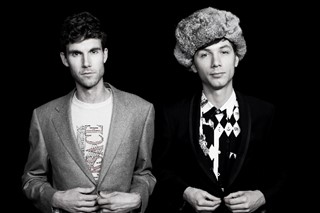 Known for their previous singles 'Oh My Gosh' and 'Peculiar', as well as their chaotic live performances, Man Like Me (aka Johnny Langer and Peter Duffy) make spectacularly upbeat pop music. Gracing Mike Skinner's label, The Beats, as his first post-Streets musical endeavour, their album 'Squeeze' was also produced by him and the first single of the same name has already been played out by Annie Mac. Here we speak to the duo about their new album alongside an exclusive stream of Baxta's remix of 'Squeeze' as well as a behind-the-scenes film of the new video...

People probably think we'd be offended if they labeled us "calypso pop" or "electro grimey pop." It's nice to hear people having a go at describing it. We're not too precious about it, so call us what you want, but I think bottom line it's pop

Dazed Digital: Where did you get your name, Man Like Me?
Peter Duffy: We went to school with a guy who will go unnamed (for our own safety). A couple years after he was kicked out for various offenses, we bumped into him. He was bragging about how he'd gotten a job, lots of money, and a mortgage. He was referring to himself as "man like me." For instance, "Man like me has saved up and pre-ordered the new X5." None of it was true, of course, but we got a band name out of it.

DD: What are the best and worst parts of working together as a duo? Who does what?
Peter Duffy: The best part is working with your mate. The worst part is working with your mate. For example, it's great when you've got a gig abroad. Since your friend is there, it feels like a holiday rather than a job. On the other hand, you end up squabbling over something very petty. The pros vastly outweigh the cons, though.

DD: You're on The Beats label and have Mike Skinner producing your album. What's it like working with him and having his support?
Peter Duffy: It's amazing as you might expect. It's very surreal to think that 10 years ago (almost to the day) we were listening to his pirate material, and now we're working with the guy.

DD: If you could name the genre you fall into, or make one up, what would the name be?
Peter Duffy: I'd say first and foremost we make pop music; we always have. People probably think we'd be offended if they labeled us "calypso pop" or "electro grimey pop." It's nice to hear people having a go at describing it. We're not too precious about it, so call us what you want, but I think bottom line it's pop.

DD: Where did you get the idea to name the single and album, "Squeeze?" What does that concept mean for you?
Johnny Langer: We were in the pub with our mate, Drew, and he kept on going "squeeze" in a weird high pitched voice, then banging on to me that we had to write a tune which went like that, so I obliged.

DD: What is the most exciting thing you've seen or heard recently?
Peter Duffy: To be totally honest, the most excited I've been was listening to the Annie Mac show, and "Squeeze" getting a rewind and played twice. I nearly wept.

DD: What is the Man Like Me live show like? Is it at all as fun as your music videos?
Peter Duffy: It's 3-5 very drunk men teetering on the brink of total chaos. Sometimes I feel like we're the best live band in London, other times I think we're fucking shit. It really can go either way.