A unique cinematic portrait of the enigmatic producer with exclusive track preview, plus the unedited psychoanalytic tapes from the Dazed May issue 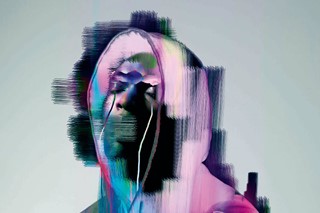 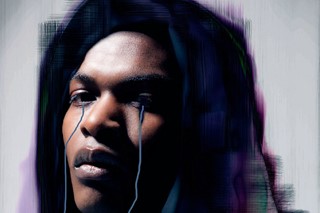 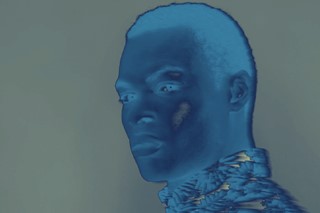 Following the arrest of an unnamed adult male responsible for a series of bizarre desecrations of public buildings – the Princess of Wales Memorial Fountain in Hyde Park, the laser at Greenwich Observatory, the Freud Museum in Hampstead – police last month raided a house in the Thames Valley. In the premises they discovered evidence strongly suggesting the suspect had been working, unlicensed and untrained, as a psychotherapist.

Documents leaked to the press include the case file of a black, adult male, born in Wolverhampton and living in south London. The young man, one Darren Cunningham, a musician working under the name Actress, had enjoyed significant and unexpected success with a record released in 2010 (Splazsh), and had just completed the recording of a new release referred to in the notes as R.I.P. He presented a series of unusual symptoms: independent automatism of right and left hands; frequent fugue states; pronounced fetishisation and personification of electronic machinery; waking visions. He reported dreaming of monuments, geometric figures and the archangel Uriel.

A talking cure had been undertaken, and the patient asked to respond to a number of site-specific or external stimuli relating to his past and/or cultural environments. The leaked casenotes are presented here without comment.

Valerie’s Cafe, a reconstituted service station cafe at the heart of Jeremy Deller’s Joy in People exhibition at the Hayward Gallery, London. Visitors enter the exhibition through a recreation of Deller’s bedroom that contains artworks heavily indebted to rave culture. Actress discusses his feelings about the rave memorabilia incorporated into Deller’s work.

R09_0011 [0:25] You start feeling computers coming into it. The vision of the Black Country, where I am from, is quite dark and gloomy, but with the computers all of a sudden you just have these neon greens and yellows and blues around you, you have acid house music going on from the older kids and stuff. You are just sitting at your computer programming and you are like: ‘Wow, what’s going on?’ My computer was the Amstrad 464 so I am an Alan Sugar programming… for me it was a pixel story. I remember, yeah, with the 464 you would get this manual but it also had this software programming – just programs where you would type them into a computer and press ‘enter’ at the end of it and it would just do something. It was really intense binary and syntax – one letter and one space incorrect at the end of writing four pages of software and it was just like: ‘Syntax error, you have got something wrong.’ So you would have to read back over and check through and you see this flashing light. So I think that is where the fascination started, really, from a really naïve idea of typing down what someone has given you and seeing what the computer spits out and then it becomes language, language data. And you can kind of make sense of it [3:42]

R09_0011 [40:54] I love dancing – I am a good dancer and I like a good party and I think, going back to when everyone else was raving and my generation was at home on their computers, I think my generation has never really had that tribal thing where they go to a rave and just lose it, and that is almost like a weekendly thing [...] What you generally find now, I am of that age that I probably don’t go clubbing as much as I used to. That tightness [in the music] is a representation of that and the muted kicks are also a representation of that, because I am making tracks in my studio, which is at home and is not a dancefloor, so the music has to work within the space as far as I am concerned. Because I enjoy staying at home and I enjoy smoking weed, and I enjoy walking around and chilling generally, and because of what weed can do to you sometimes, it can make you quite paranoid, or it can make you be quiet at certain times, or it can make you feel euphoric, or it can make you feel a little bit tense about certain situations or vibes or whatever, it goes into the music [43:05]

R09_0011 [5:16] How can you deal with so much noise in today’s mass-production of content? There is so little silence in all of that. I guess that is why I make music, really. I need to be able to find that silence from it and even though music isn’t silence in itself, the actual process of doing it can be silence.

That is why I like the idea of infinity, infinite trails, and that is kind of what my music is about really

A sort of mastery of the sound?

Yeah, well, mastery comes from practice. Start playing a sport and generally you can be quite shit at it, really. I remember when I started playing football I didn’t know what the hell I was doing, I just started playing football and that was it and then I did something: I remember going and scoring this goal, it was a really jammy goal, and I kicked it and someone came and slid, tackled, and it looped off his foot, and the keeper came running forward, and it looped over him into the back of the net. And the euphoria I got from scoring my first goal was just unbelievable, and from that point onwards I just couldn’t stop scoring goals. And you know, you develop a sense for it and then your brain just analyses trajectory and geometry within such a quick ‘duh-duh-duh-duh’ and then it’s like, all of a sudden: ‘I get it, the ball is round, so obviously there are different points on a ball where I can kick to make it do this and it will do that and so…’ So for me, that is how the process always is, within that split second of analysis.

I think I have only just now worked that out for myself but at the time it is more naïve, isn’t it? You don’t really understand your brain and you’re just more interested in having fun [...] people throw little bits of data at you and it is for you to either agree or disagree and find yourself in the middle, it is all that kind of logical processes and then trying to find answers, but then are there answers to anything, really? That is why I like the idea of infinity, infinite trails, and that is kind of what my music is about really. I don’t really approach music in a, like: here’s a beginning, middle and end... If you are a producer and you have to make music for a particular market, then I guess you approach it in that way. I try and approach music from a sense of pure sound and a fascination with what it does [10:32]

“Darren Cunningham […] fractured his left kneecap for the third time in pre-season training and underwent another operation on Friday. The initial prognosis put the Wolverhampton-born striker out of action until at least Christmas, but [West Bromwich] Albion manager Denis Smith is pessimistic about the youngster’s chances of making a comeback. “I think we’ve got to face the worst,” he said. “It’s the third time it has happened now. Football can be a cruel life as well as a good one.”

R09_0011 [13:39] I have been brought up to be not overly religious, and not God-fearing either, but very church, most Sundays, heritage-based. And so, obviously, the idea of God is very much there. But the problem with me is that I am also a rebel generally, you know what I mean? So, often my sinful delights get in the way of the clarity of possibilities and so it is like: I can do this music – so is it a gift? Is football a gift? But I can’t play football any more, so is that gift taken away from me? Was it taken away from me for any particular reason? I can’t play football any more, so how do I apply the idea of playing football to the idea of making music? So you kind of apply it, but that happens naturally because that is who you are [14:59]

Albion’s youth team coach Richard O’Kelly was more upbeat. “If anyone can come back from this then Darren can,” he said. “He’s come back twice before and his attitude to everything is great.”

R09_0011 [20:34] You walk around, you just see beauty every day and I am in paradise and that’s how I feel all the time and it doesn’t really matter. It doesn’t necessarily mean that I am feeling great all of the time, I can feel shit, but I generally just see beauty in everything and everyone really [21:42]

The South Bank, walking towards Southwark.

R09_0012 [0:59] The way I approach music is much more from a sculptural perspective. You build algorithms. You can layer those algorithms so they become marble-like. Autechre do the complete opposite to what I do. You can see the axis, you can feel what they’re rotating around certain things. What I do is the same but I smudge it completely, so you can feel the axis but you can’t get that clarity of where it is. I like things to drip. There’s execution and there’s perfection and even though I’m a perfectionist I don’t like having something that’s so perfect you can’t see the flaws. You have to have a sense of there being a flaw in it, because essentially I’m human and I want a human aspect always to be there in my music.

That’s a shame, because I want you to be just another circuit in the process.

We’re part of the digital age, innit? I was talking to you about programming the Amstrad. I think at that point, when you start putting language into circuits, that’s when you become digital. You’ve seen it in dance music at different times, with Afrika Bambaataa, and breakdancing and robotics. We’re digital, completely [3:39]

Inside a hall of mirrors, an ‘infinity room’ illuminated by red, yellow and blue orbs of light at the Yayoi Kusama exhibition at Tate Modern.

R09_0015 [0:00] They’ve asked me to do a music performance influenced by her work or tracks that I have that may speak at it, and it’s going to be a silent disco. She’s obviously awesome, and we obviously share similar ideas about art, but it gives me a bit of a headache. That’s not a bad thing. It gives me a headache because I can see her obsession. I got the same thing off an Yves Klein picture which is a really deep blue [2:15]