Led by a new generation of creative youth, there’s a cultural revolution happening on the streets of Tbilisi right now. Across fashion, art, music, and beyond, today we explore what’s happening in the Georgian capital, and why the city deserves to be on your radar.

“It’s like living in what’s left of something that died, like the corpse of a dinosaur. The Soviet Union was gone by the time me and my friends were born, but its ghosts are everywhere – in the supermarkets, on the buses… We grew up alongside this new, totally savage jungle that emerged out of its ashes, and it’s still changing, still struggling to find its identity, even now. It’s this weird, chaotic little city that doesn’t really fit into anything.”

Maxime Machaidze, one half of rap duo KayaKata, is describing his hometown of Tbilisi. Situated at the point where eastern Europe meets Asia, the historic Georgian city reverberates with clashing influences, brutal, Soviet-era buildings jostling with the ornate carvings of its old town, and breathtaking natural waterfalls lying hidden behind hastily erected concrete tower blocks. Now, as Tbilisi emerges from the shadow of Soviet rule, civil war and economic crisis, a new generation of forward-thinking creatives is carving out its own narrative for the future. It’s a scene that’s inspired by the ever-evolving landscape of the city, from music to art and the flourishing fashion scene led by Vetements founding father and Georgia native Demna Gvasalia, who has done much to draw attention to his homeland. 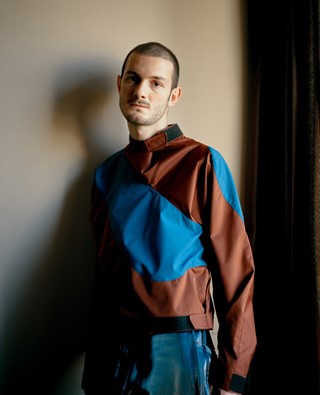 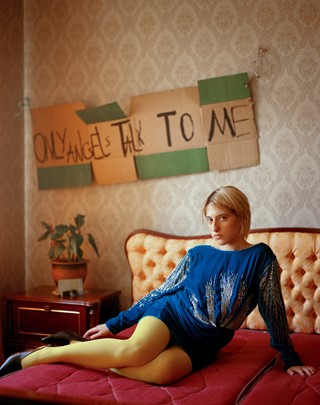 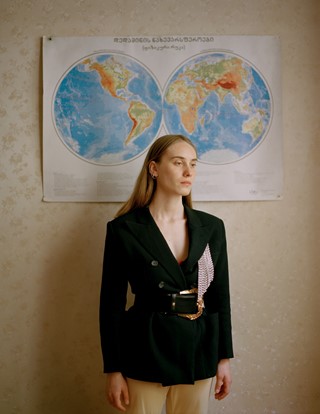 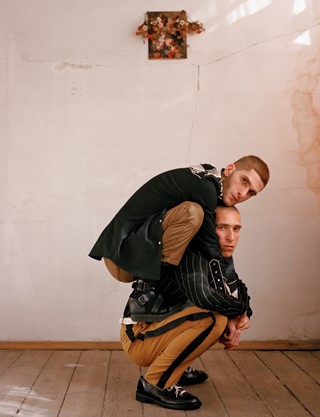 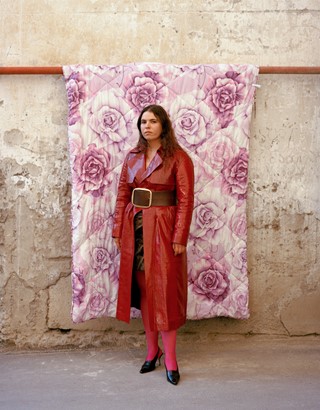 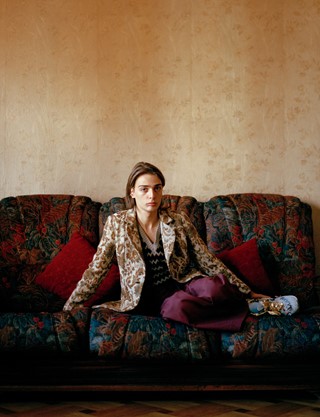 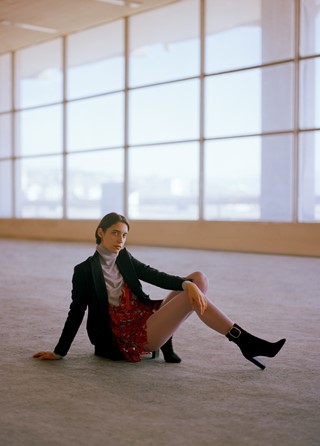 Machaidze – or Luna, as the artist is better known – makes offbeat, experimental hip-hop alongside Zurab Jishkariani (AKA Dilla) as part of KayaKata, which translates as ‘cool cats’ or ‘weed cats’, depending on who you ask. The pair’s languid drawl and trippy visuals have won them comparisons to the likes of Wu-Tang, but neither are keen to be tied down by labels.

“My dad and my uncle made post-industrial electronic music and films in the early 90s when they were living in Berlin, and Dilla and I used to be in a band called Kung Fu Junkie, putting out these skewed pop and electronic tracks,” explains Machaidze. “As KayaKata, we’re making hip-hop, but we’re influenced by everything, and I don’t think we really fit into a category – our stuff comes from weirdness. As a kid, I did a lot of psychedelics, which opened me up to things. I think that’s something that links a lot of the youth in Tbilisi. An openness, and a desire not to be categorised.”

Machaidze also runs a streetwear label called LTFR, which he shows as part of Tbilisi Fashion Week, with girlfriend Iri Tordiashvili. “Well, sometimes I do, sometimes I don’t,” he laughs. “It’s always quite disorganised, right up until the last minute.” In fact, this DIY spirit underpins many of the city’s labels, as the likes of Aznauri, Gola Damian and George Keburia make waves with their individualistic, boundarypushing designs. While Tbilisi Fashion Week continues to draw attention, Demna Gvasalia presented a surprisingly personal collection at Vetements’ Paris SS19 show, inspired by family, war and his memories of fleeing the country’s Abkhazia region as a refugee in 1993. Many of the designer’s cast, largely made up of Georgian models who stormed intensely down the catwalk, belonged to Troublemakerz and Tamra Skateboards – respectively, the Tbilisi-based modelling agency and skate collective founded by Tamuna Karumidze.

Karumidze stepped into the spotlight after co-directing the 2015 film When the Earth Seems to Be Light, which follows a group of teenage skaters around Tbilisi, with David Meskhi and Salome Machaidze. The film offers a glimpse of life on the fringes of Georgian society, portraying a country that still clings on to its troubled past through the eyes of its youth.

“There were ten or 15 boys when we made the film; it was a small group,” says Karumidze. “They were kind of vilified by people living in the city, who had very negative ideas about skaters. After When the Earth Seems to Be Light came out people were like, ‘I always thought they were hooligans moping about the city, breaking things and being dangerous. We didn’t know they could actually be nice.’ It gave the boys confidence to be themselves.” Having forged strong bonds with the group, Karumidze continued working with the skaters after the film wrapped, eventually launching Tamra Skateboards – a collective which offers marginalised kids an inclusive space to create and collaborate – and its fashion-label counterpart, Tamra.

Like LTFR, Tamra’s track record of showing at Tbilisi Fashion Week is sporadic, but when it does, the presentations are usually pretty riotous – angular boys and girls covered in tattoos skate and dance around each other seemingly unaware of the audience, and at one show a model energetically vogued down the catwalk. “I want it to feel removed from fashion, really,” says Karumidze. “I don’t want to create collections. I want to tell stories.”

This autumn, a troupe of the artists, poets, musicians and performers that make up Tamra and Troublemakerz agency came together to launch a new boutique hotel in the heart of Tbilisi with a runway show. The day before, Karumidze received a call from the international chain which had organised the event asking her to drop one of her models from the lineup.

“I was shocked,” she explains. “This hotel knows who we are and what we do, and here they are asking me to drop one of my models because he is gay. You know, we have this amazing LGBTQ scene in Tbilisi, and all these inclusive spaces… I really thought we were making progress when it came to acceptance.”

For Karumidze, the request highlighted the disparity between companies looking to cash in on the city’s newfound cool, and the conservative, homophobic attitude to the queer community that permeates Georgian culture. “There’s a dark side to Tbilisi that makes itself known every now and then to remind you that things are still complicated here,” she says.

That darkness surfaced in May of this year, when armed police stormed legendary techno club Bassiani and bar and art space Cafe Gallery. The unsanctioned raids led to a huge protest rave which took place in the shadow of the city’s former parliament building, as the international dance music scene showed its support with live streams and messages of solidarity. The resounding call of “We dance together, we fight together” rang out around the world. “They said it was about drugs,” says Karumidze. “It wasn’t about drugs, it was about politics and control.”

The model Karumidze was asked to drop from the recent Tamra show was actor and performer Matt Shally, who was assaulted by the police on the night of the raids. Shally and his friends had been heading to LGBTQ club night KiKi at Khidi, a cavernous techno club on the banks of the Mtkvari river, and decided to stop at Gallery for a drink on the way. “When we got there, police in riot gear with machine guns were blocking the entrance,” explains Shally. “We asked why we couldn’t go in, and what was happening to the people in there, but they kept shouting at us to leave. Eventually one grabbed me by the hair and started beating me, before my friends managed to drag me away.”

In the aftermath, Shally gave an emotional interview at the scene which saw him hounded in the street and bullied on social media. “For a few months, I couldn’t go out because people would stop me in the street,” he says now. “Someone released a video of me performing drag and I started receiving messages filled with abuse. Eventually, I got fed up with all the bullshit – my family accepts me, my friends accept me, so why should I care what other people think? If people like me don’t live freely, how will things change for the next generation, and the generation after that? I want to be an inspiration to them, in the same way I’ve been inspired by those before me that fought for freedom.”

Shally’s rallying call is echoed by another Troublemakerz signing – Liza Rivs, a DJ and producer living between Paris and Tbilisi. “The government is afraid of this new wave of people who are striving to be free and express themselves,” says Rivs, a Khidi mainstay who is at the heart of the city’s pulsing techno scene. “Georgia was always a conservative country, but what some people don’t realise is that if they continue to try and repress us, we will push back harder. The raids didn’t stop people going to the clubs. If anything, there are more parties in Tbilisi than there ever were.”

Clashes between Georgia’s archaic system and its youth aren’t likely to end any time soon, but this hopeful new generation is willing to tackle whatever comes its way – through art and music and sheer determination – until attitudes change. “One thing about Georgian people is that they go into things with their whole heart,” says Machaidze. “That 10,000 people came together to dance for change on Rustaveli Avenue still gives me goosebumps. Slowly, this city is going to turn its weirdness and all of its traumas into something truly amazing.”