Ahead of their European tour, the Italian group talk their Måneskin brand of rock, ignoring the haters, and TikToking all over the world 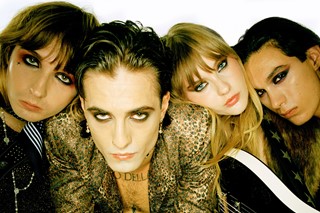 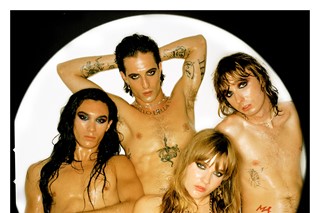 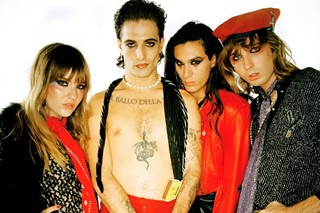 When tickets to Måneskin’s 2022 European tour went on sale, the members of the band placed bets on how long it would take to sell out the dates.

“I was like, ‘OK, maybe one week.’ And (everyone) was like, ‘One week! That’s too little time! We need more time!’” says bassist Victoria de Angelis. “And after two hours, we saw our phones. We were like, ‘Fuck!’” The entire tour had sold out, with the Brixton Academy date selling out in 25 minutes.

For Måneskin, it’s just another surprising achievement in what seems to be a neverending string of career wins. On a Zoom call with Dazed, the band members – De Angelis (21), vocalist Damiano David (22), guitarist Thomas Raggi (20), and drummer Ethan Torchio (21) – all sit on a couch, filling in the blanks in each other’s sentences and laughing loudly when one of them cracks a joke, a frequent occurrence.

Måneskin, meaning ‘moonlight’ in Danish (De Angelis is half-Danish), formed in Rome in 2015. David, De Angelis, and Raggi went to school together in Rome and found Torchio through Facebook. Having started out busking in the city’s streets, the group came second on Italy’s version of The X Factor in 2017, releasing their debut album Il Ballo Della Vita (The Dance of Life), a triple-platinum seller in Italy, the following year.

In March of this year, the band won Italy’s Sanremo contest, which meant they would go on to compete in Eurovision. Their song, “Zitti e Buoni”, with its blaring bass and wailing guitars, may have seemed an unlikely contender for the pop-friendly competition, but ended up taking home the top prize – making Måneskin the first Italian act to win the contest since 1990, and the first rock act since 2006.

Måneskin are dedicated to making rock music, favouring loud, gritty guitar, bass, and sprawling riffs, evoking the glam and classic-rock styles of decades past. Their influences include a mix of older and modern bands, including Led Zeppelin, Fleetwood Mac, Nirvana, Franz Ferdinand, Arctic Monkeys, the Sex Pistols, and Slaves. David says that he and his bandmates were drawn to the genre’s “energy and the fact that it allows you to express yourself in many, many different ways”.

“It's not just a kind of music, it’s also an attitude,” says Torchio.

However, Måneskin were discouraged from making rock music throughout their career, as guitars fell out of favour with younger listeners. “We feel like we made everything by ourselves and I think that makes it even sweeter,” says David. “We had to fight a lot for what we believed in because everyone was telling us not to do it. But in the end, we did it and we did it to the top.”

Following their Eurovision victory, the band started to take off on TikTok, despite not being on the app themselves. The tag #maneskin now has more than four billion views. “I think that the cool part of TikTok is that any song can go viral, even after years,” says De Angelis, pointing to Fleetwood Mac’s “Dreams” as an example.

Måneskin experienced that first-hand when their 2017 cover of The Four Seasons’ “Beggin’” blew up on the app this summer. The song has been used more than ten million times on TikTok, and claimed the top spot on Spotify’s Global Top 50 chart for four weeks.

The band members, who recorded the cover as teenagers during their X Factor run, have mixed feelings about the song’s success. “Of course we were really, really happy (with) what was going on but when we look at the picture on that song, and we hear the mix, we just think that many, many things could have been done better,” says David.

“We were very (young) when we made it,” says De Angelis. “(Whereas now) we have other songs we wrote ourselves which we think were done better.”

“And other clothes!” adds David.

Thankfully for the band, “Beggin’” – which David compares to “the cringey video that your parents show at Christmas dinner… but it’s global” – wasn’t the only song of theirs to perform well. Måneskin became the first Italian band to have two songs – “Beggin’” and “I Wanna Be Your Slave” – in the Top 10 of the UK Singles Chart simultaneously, with the songs peaking at six and five, respectively. Over the past year, charts and radio are proving more amenable to guitar-driven music and rock has surged in popularity, as pop artists like Miley Cyrus, Willow, and Olivia Rodrigo turn to the genre, with Måneskin becoming the leaders of rock’s resurgence.

“Growing up in Italy, which can be a very narrow-minded and conservative country, we experienced a lot (of discrimination), especially in the music industry, with the way we look and everything” – De Angelis

It’s not a position the band take lightly. “We feel like we have the power and a huge number of people listening to us,” says David. “So we feel like we can do something meaningful and useful.” Måneskin are committed to using their platform to share their message of self-expression and to empower those who face discrimination. Says De Angelis: “Growing up in Italy, which can be a very narrow-minded and conservative country, we experienced a lot (of discrimination), especially in the music industry, with the way we look and everything. And so it’s just a thing that is part of us and that we feel we can speak about.”

Their latest album, Teatro D’Ira: Vol I, released in March, has a running thread of refusing to conform, with recent single “I Wanna Be Your Slave” subverting gender roles. But these messages also come through in the band’s glam style, which landed them a starring role in a recent campaign for Gucci. “We hope we can inspire people to dress as they want and to behave as they want in everyday life,” says David.

The members of Måneskin proudly challenge gender norms and encourage others to express their sexuality, taking a stand against homophobia. In June, David and Raggi shared a kiss on stage at the end of a performance in Poland, amid rising anti-LGBT sentiment in the country. “We think that everyone should be allowed to do this without any fear,” said David during the performance. “We think that everyone should be completely free to be whoever the fuck you want… Love is never wrong.” It’s a message which has helped them connect with fans around the world, according to De Angelis: “A lot of people tell us very meaningful things and that we are helping them in many ways and this is unbelievably precious for us.”

At the same time, there are many who don’t understand what Måneskin are trying to do, and act “like we were doing something that was too much, too weird, too freak,” says David. But the frontman points out that Måneskin aren’t the kind of band to let reactions like that faze them, instead using them as fuel for their latest track, “Mammamia”. “It’s about doing something great (which) people don’t want to understand and just (make) judgments and bad comments. But in a very funny way, of course. We made fun of haters, basically.”

The brash song, with tongue-in-cheek lyrics like, “They ask me why I’m so hot / ’Cos I’m Italiano,” was written soon after the band won Eurovision, and came together quickly. “From the first time, we were like, ‘Mamma mia, this is a good song!’” says Torchio.

It’s been a whirlwind year for the band, with their summer filled with festival performances including Global Citizen in Paris – a far cry from the streets of Rome they played as teenagers. When asked about what advice they’d give to their younger selves, De Angelis says, “Nothing. Do exactly what you did. But make a better picture for ‘Beggin’.”