Inspired by the compelling legacy of his civil rights pioneer grandmother, the actor is paving the way for a more socially conscious Hollywood 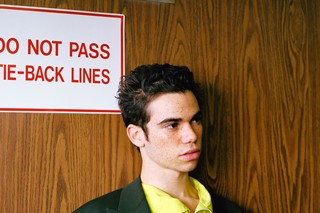 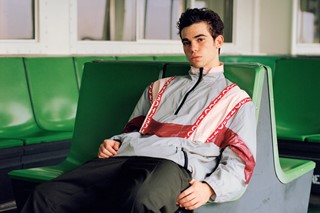 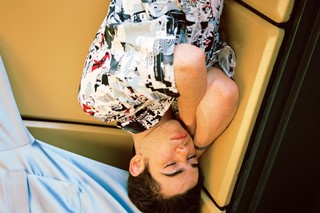 Taken from the spring 2019 issue of Dazed. You can buy a copy of our latest issue here.

Cameron Boyce’s greatest inspiration is his grandmother, Jo Ann. Now aged 77, she was part of the Clinton 12 – a group of courageous black students who attended Clinton High School in Tennessee, following the Supreme Court’s 1954 ruling for it to desegregate. “She had to be so brave,” says Boyce. “She had to face death threats, berating and violence just to go to school. She’s a hero – they’re all heroes.” The LA-based actor, who is of African-American and Jewish heritage, has inherited his own sense of right and wrong. As well as being outspoken on the importance of representation in Hollywood, he raised more than $27,000 for The Thirst Project, a charity working to end the global water crisis, in 2017.

It’s an energy that Boyce brings to his role in upcoming indie thriller Runt, as a neglected teen pulled into a cycle of violence. “It’s important to show (characters) from every walk of life so people can say, ‘I can do that too,’ and feel like their existence is acknowledged,” he says of the part, which he prepared for by shutting himself away from his family for long periods. “I isolated myself in the same way my character does; it allowed me to understand where this kid is coming from.” Previously known for his roles in the Descendants TV films and the Disney series Jessie, Boyce now stands on the brink of a different kind of stardom. Smart, sensitive and socially conscious, he’s the template for a new breed of celebrity – the kind needed in the public eye more than ever.

How does your role in Runt feel different from your roles before?

Cameron Boyce: It’s very different. It’s obviously me, but it’s the tone and the subject matter and the complicated nuance of traumatic childhood events. I was pulling from a very different place [as an actor]. It’s a story about a kid who is a bit lonely and a bit isolated, without a dad and with a mum who isn’t always present.

What was it that first interested you in the story and made you want to take on the role?

Cameron Boyce: This was the first time that someone had reached out to me and instantly believed in me, without any proof that I could handle the weight of the role. I’ve done a lot of work but it’s been a lot of Disney stuff, and a lot of children’s stuff, so the fact that someone was like ‘no I totally believe that you can do this,’ was empowering.

“I understand that there are 9 year olds watching me and my every move, so I try, at least in a public, to be as good of a role model as I can” – Cameron Boyce

How did you prepare for the film?

Cameron Boyce: Because the kid is so isolated and because I’m so family-oriented, a week or so before we started shooting I warned [my family], like ‘hey guys I’m gonna be ignoring you for a month and a half, completely’. I started to sort of detach myself from things, I didn’t talk to my best friends for a month and a half. I isolated myself the same way the character does. That allowed me to sit with my thoughts and understand where this kid is coming from.

Your grandmother, Jo Ann Boyce was one of the Clinton 12. Could you tell me more about that?

Cameron Boyce: I’m always glad when people ask me about it because to me they don’t get nearly enough credit. Imagine being the first to do what people considered an impossible thought for a long time. She had to face death threats, berating and violence just to go to school. I’m lucky I still get to talk to her about it now and she’s still willing to share that information. I can plug her book actually, it’s called The Promise of Change and it’s coming out pretty soon. I’m excited for her and for people to educate themselves on it, because it’s a pretty remarkable story.

It feels like you’re a very socially responsible celebrity – is that something you think about a lot?

Cameron Boyce: Yeah. My mum was a social worker in health when the AIDS epidemic hit, and now she’s doing homeless coordinating and managing teams on Skid Row. Also, being on the Disney Channel, I understood that I was going to affect a lot of young people. I’m gonna be 20 in five months, I’m an adult, but I understand that there are nine year olds watching my every move, so I try, at least in a public, to be as good of a role model as I can.

When was your first acting job?

Cameron Boyce: I think I was seven, which I always tell people is too young to actually understand that I was acting!

Looking back, how do you feel about having started so young?

Cameron Boyce: A mixed bag. I’ve grown up on set so I understand a lot of things that a new actor wouldn’t, whether it’s etiquette or how things work on a technical level. I was around the same three kids for 12 years and around a different group for another two, so it’s a different way of growing up. I can’t really get advice from normal people because they don’t really know what I’m going through!

Do you have a spiritual practice?

Cameron Boyce: I wouldn’t necessarily say a practice, but recently I’ve gotten way more spiritual than I ever have been. I’ve never been particularly religious but I have recently acknowledged the universe and it’s crazy powers, and that will probably fluctuate for the rest of my life. But I believe in a lot of things that you hear, I believe in karma, I believe that things happen for a reason. I believe that if you put an energy out into the universe, you’ll receive it back.