Taken from the spring/summer 2018 issue of Dazed. You can buy a copy of our latest issue here

Nakhane Touré can’t go home. The South African actor, musician and writer moved to London from Johannesburg in February – but, sheltering in a cafe from the snow, he admits it’s a bit cold for his liking. It’s better since he figured out how to layer, but he wonders what that’s going to do for his sex life. “I guess it adds tension,” he quips, miming the act of laboriously undressing a lover. “‘Oh, a fifth layer! This is the last one, surely.’”

With his sparkling eyes and laughter that rings like church bells, Touré makes light of his situation, but there’s turmoil beneath the surface. He left Johannesburg last year in the midst of controversy, after starring in the intimate movie Inxeba, known in English as The Wound.

The entire history of Top Boy, as told by its starsBritain’s favourite street drama is back from the dead – we go deep on its past, present and future with the team that live and breathe it
Nakhane - spring/summer 20187 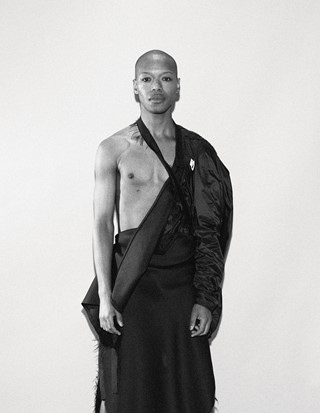 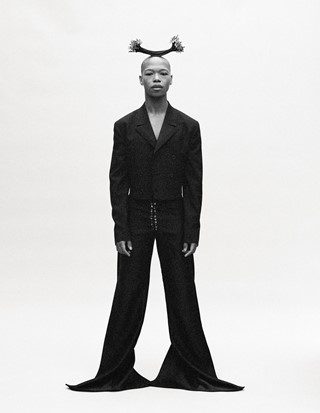 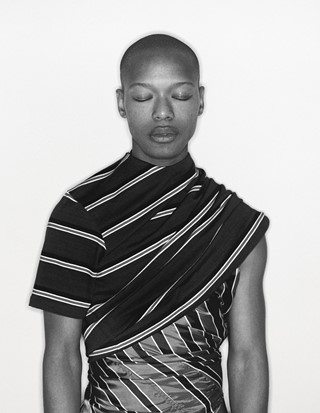 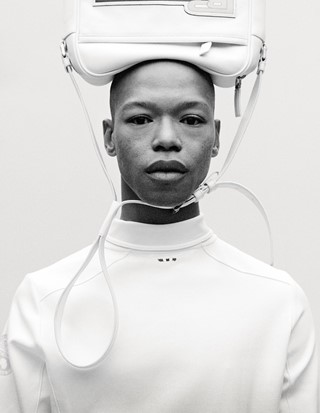 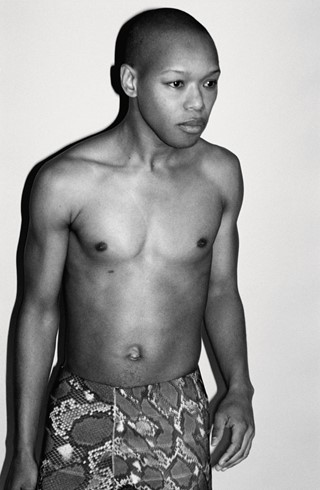 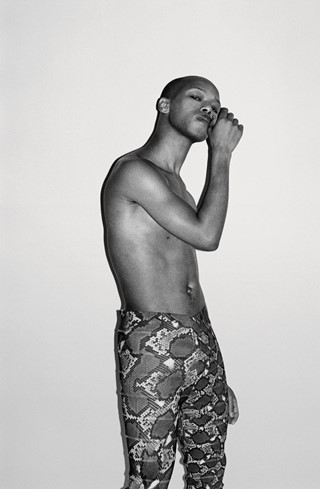 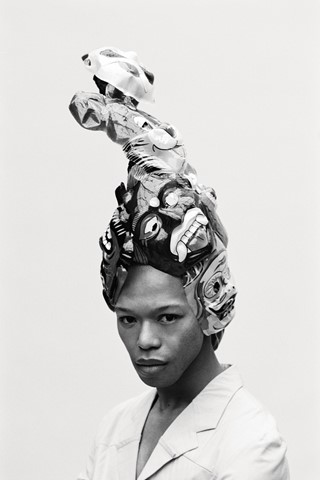 The Wound explores the Xhosa ritual of ulwaluko – a rite of passage that sees teenage boys journey into the mountains, where they are circumcised by adult male caregivers, and subsequently spend several weeks healing before returning to society. Touré’s character, a quiet man with heavy eyes named Xolani, returns to the mountains each year, because he has a secret relationship with one of the caregivers, a married man named Vija.

Vija is boisterous, loud, and in many ways the opposite of Xolani. But in their slow, wordless scenes together, he becomes tender. The two seem somehow role-reversed with the teenagers, appearing vulnerable and childlike in some of the film’s most beautiful moments, as their performative masculinity slips away and their bodies swaddle one another in the grass.

On the film’s release in South Africa, Touré received abuse and death threats. He chooses his words carefully when he talks about it, making unwavering eye contact. “I was expecting a backlash, but I wasn’t expecting one so extreme,” he says. “I didn’t know people would say, ‘If you ever set foot in the Eastern Cape again, we’re going to put two tyres around you and burn you alive, you freak.’ That is insane – that, in this day and age, we have to fear for our lives.”

The script for The Wound struck Touré because it felt so familiar. “I know these people,” he remembers thinking as he read the character of Xolani, so repressed and furtive. “They’re my cousins and uncles, they’re guys I grew up with. Some of them scared me, some of them I loved. Some I didn’t know the names of but I’d seen, quietly smoking, laughing at jokes they didn’t find funny, but they had to laugh along because they didn’t want to be victimised. As a teenager, some would hit on me – but never in public.”

That’s why The Wound was controversial on its release – because it brings something hidden into the light. In South Africa, says Touré, many would like to pretend that homosexuality doesn’t exist, or is ‘un-African’– especially in such sanctified, heteronormative spaces as the Xhosa rite of passage.

But that’s simply not reality. Touré took part in ulwaluko when he was 20, at a time in his life when he was battling his own queerness. As a Christian, not yet accepting of himself as a gay man, he tried to bury the desires he felt towards members of the same sex. “I thought ulwaluko would be great, because it would be the safest space for me,’” he recalls. “But it was the opposite. I got hit on all the time.”

“I didn’t know people would say, ‘If you ever set foot in the Eastern Cape again, we’re going to put two tyres around you and burn you alive, you freak.’ That is insane” — Nakhane

The Wound’s controversy, Touré believes, is rooted in the public’s disbelief that the ritual can be a space where same-sex desires flourish. “People who benefit from the invisibility of queer (people) are going to be upset,” he says, “because you are not only showing a part of the world that is secret, you’re also making them face themselves.” The healing of an emotional wound, after all, involves what’s inside being brought painfully to the surface. In the film, even as physical cuts heal, the psychic scars run deep.

When he was a child, Touré felt he didn’t have any gay role models to look up to. He was raised in the Eastern Cape town of Alice, as part of a sprawling family. Cousins, siblings, parents, grandparents, aunts and uncles would sit around a large bowl at meal time, sharing the same spoon as a mark of equality and respect. “That was the closest you could be to people,” Touré reflects. In Xhosa culture, to not use the same spoon as a family member is incredibly offensive, suggesting that you’re disgusted by that person.

Touré’s mother is a devout Christian, but his family observed Xhosa rituals. “I always had an understanding that we had the ritual side of things – the traditional spirituality – but then we also had Christianity,” he says. “My family was Socratic when it came to spiritual beliefs, and somehow split in the middle.”

Touré’s emerging queer identity and conservative Christian beliefs were in conflict, though, and in his mid-20s he began questioning his spirituality. At the time, he had written his debut album, Brave Confusion, a collection of dark folk-pop songs that embraced his sexuality, and was finishing his first novel, Piggy Boy Blues. But while Touré’s creativity was flourishing, his family had been declared bankrupt, and he was sleeping on friends’ couches. “The church made sure I distanced myself from queer friends, because they were ‘bad inf luences’,” he says. “But when the shit hit the fan, the bad influences were the ones who actually showed love.”

In 2013, Touré got the call from director John Trengrove about The Wound. Initially, he invited him to compose the score, but after meeting, he asked Touré if he would audition for the lead role instead. Despite not having acted since school, Touré quickly found his way inside the character – he went to a market to buy clothes he thought Xolani would wear, and spent time alone in bars he thought Xolani would drink in. He nailed the audition.

“The film was very authentic,” Touré argues – or at least, as ‘authentic’ as it could be, given the diversity of experiences among Xhosa men. “There are so many different ways of doing the initiation, that the whole idea of authenticity is inauthentic in itself,” says Touré. “You can’t represent everyone. This is just one story.”

In the South African press, there has been much discussion about whether Trengrove had any right – as a white South African – to direct a movie about a sacred Xhosa ritual. This argument, though, erases the involvement of Xhosa men in the film, including co-writers Malusi Bengu and Thando Mgqolozana. Of the latter in particular, Touré says, “I trust his politics, his art. That is one of the reasons I took part, because I knew that the story was in safe hands.”

“Just watch the film. Don’t walk out in the first ten minutes because you’re offended. I think a lot of the criticism was thinly veiled homophobia” — Nakhane

As for the vehemence of the backlash, Touré doesn’t believe it was truly about cultural appropriation at all. “With that argument, it’s like – just watch the film,” he says, exasperated. “Don’t walk out in the first ten minutes because you’re offended. I think a lot of the criticism was thinly veiled homophobia.”

In reaction to the news of the X18 rating, Touré shared an impassioned note on Twitter and Instagram: “I sat in my apartment reading the verdict, close to tears, shaking,” he wrote. “So you’ll take us out of your cinemas, you’ll rip our paintings/photographs off walls. But we will not be going anywhere.”

When we meet a few days after the incident, Touré puts it plainly. “It made it clear that queer sexuality is still seen as deviant,” he says. “It is something that shouldn’t be seen. We’ll watch 50 Shades of Grey, or every last Von Trier film...” He trails off, the hypocrisy so self-evident he doesn’t need to spell it out. “I might get murdered. That hurts. That’s not me blowing things out of proportion – I can’t go home.”

The lack of acceptance Touré feels in his home country is painful, but he has long learned to accept himself. His new album You Will Not Die, released in March, is full of earthy, rock-tinged pop songs that speak to the quiet power of being comfortable in your own skin. In the video for lead single “Clairvoyant”, he stands naked and glistening under a shower of blue light, drums pounding as he runs his palms over the bare chest of a lover.

“The album is me trying to understand who I am without Christianity, which was my mother tongue for a long time,” Touré explains. “Understanding myself as a queer person. It was hard, because wherever you go you’re reminded that you should be ashamed of yourself.” As he speaks, Toure’s expression is calmly confident, a mirror-image of the fixed stare he gives in the “Clairvoyant” visual. “When (The Wound) came out, the word ‘shame’ was used a lot. But I am not ashamed any more.”

The Wound is out in UK cinemas today