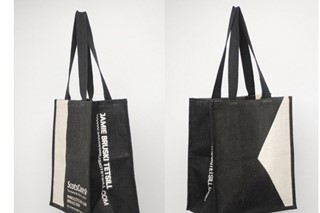 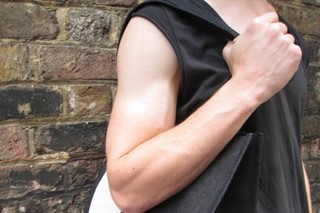 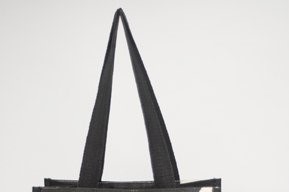 For many of us shopper bags have turned into indispensable items: we use them daily not only to carry groceries, but also to store our everyday objects, such as books, phones, cameras and even laptops, and last, but not least, to make a statement about a greener lifestyle. Yet there’s shopper and shopper and Jamie Bruski Tetsill’s is rather special. The bag marks a new turn into the designer’s career towards a minimalist approach and an ethical lifestyle, but also carries an important message since proceedings from its sale will go to charity ScotsCare.
One of the oldest charities in London – it was founded in 1603 – ScotsCare helps first and second generation Scots in hardship, need and distress in the English capital. “Jamie has done a terrific job and he highlights the talent of the many Scottish fashion designers in London and the impact they have,” ScotsCare’s Chief Executive Willie Docherty said about this project, “being able to tap into this to highlight the plight of less fortunate Scots in London is a great way to get our message across. I hope people wear the bag with pride as they walk around and show the ScotsCare brand. All of the money raised from the bag goes directly towards supporting needy Scots in London so I hope everyone gets online and buys one.”

Dazed Digital: How did you get involved in this project?Jamie Bruski Tetsill: A while back the people at ScotsCare read a piece about myself in London’s Metro and, seeing that I was a Scottish designer, asked me if I wanted to get involved in a project to help less fortunate Scots living in the capital. I was delighted to give them a hand and decided to get involved straightaway. ScotsCare does a great job and even helps Scottish students living in London who find it hard to pay their fees, so I was very happy to help them getting their message across. This was a first for me, but it was also an entirely new project for them as they never collaborated with a young designer before.
DD: The shopper is characterised by a simple yet bold design, what inspired it?Jamie Bruski Tetsill: The bag is made with naturally grown, hand-woven and hand-dyed jute and it’s completely biodegradable right down to the print which has been made with a special type of chalk that doesn’t contain any chemicals. The design featured in the shopper contrasts with what I’ve done so far. In previous collections (www.dazeddigital.com/Fashion/article/1383/1/Inside_Jamie_Bruski_Tetsills_world__) I have either opted for very subtle or for complex geometric designs. But, while working on this project, I focused on details, turning my own name, and in particular the K letter in my surname, into a simple yet immediately recognisable logo. When I first settled to work on the bag I felt I wanted to do the simplest yet boldest, striking and timeless design I could do, something that could stand out in a crowd and also among the other currently available shoppers. I’m very happy with the results, besides, knowing I have designed a bag that also helps the environment makes me feel like I have contributed to spread the green lifestyle message.
DD: Which was the most important lesson you learnt while working on this project? Jamie Bruski Tetsill: I jumped at the prospect of getting involved in this project because it was very important on a human level. But now that the bag is finally out I can say that it was very rewarding in many ways. I had never fully researched the opportunities that ethical products can open up for a designer. After researching into the fabrics and the printing processes, I discovered many things I didn’t know and, suddenly, one of the simplest projects I ever worked on, turned into one of the most complicated, but also most engaging ones. While designing the bag I got the chance of thinking more about which fabrics to use, where fabrics come from and the whole ethical production process in countries such as India and China. This project opened my eyes to what is achievable and what damages the environment. I realised this may not be the easiest route to go down for a designer, but it is the most sensible and it’s definitely a route I will pursue in future projects.

DD: In which ways do you feel this project will influence your future designs?Jamie Bruski Tetsill: While working on the bag I thought a lot about my work and discovered a new direction for it: I can now see these simplified geometrical shapes inspired by my name combined with my signature tufting technique coming up in an entire collection. These new geometrical shapes will become my brand identity and, hopefully, they will also become more recognisable in the future. At the moment, I’m developing these new designs since I’m planning to use them for a very affordable ready-to-wear collection to sell in pop up spaces inside popular stores and on my website, along with my couture line.

DD: The launch of your bag coincides with London Fashion Week, what do you expect to see on the London runways?Jamie Bruski Tetsill: I think the best thing about London is that you can never expect a certain thing. The fashion week over here is talent-driven and very ahead of its time and all the designers featured in it are doing their own thing. I love the energy and unpredictability of this event. What I know for sure is that we will certainly see forward-thinking designs, a lot of colours and engaging prints and live some absolutely exciting days!
Jamie Bruski Tetsill’s limited edition bag is priced £9.99 and is available from ScotsCare’s site.