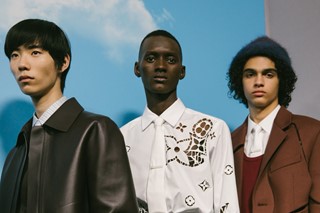 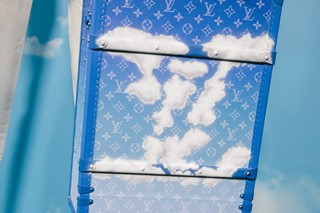 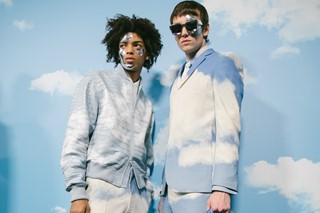 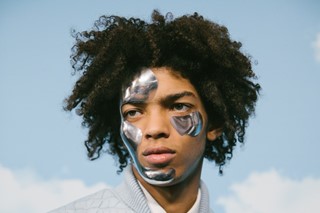 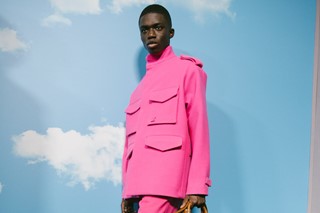 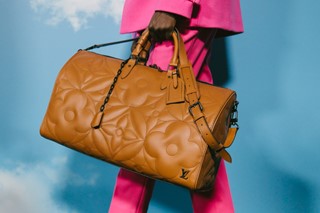 After a three month hiatus from fashion, Virgil Abloh is back, baby! Having shown his latest collection for Off-White in Paris yesterday, today he’s taking us through the agenda for Louis Vuitton AW20. Invite lost in the post? Don’t worry: we have you covered.

THE INVITE WAS A CLOCK

...which had been wired to move backwards. But then, it’s likely you’re fully aware of this by now, given it’s been all over Instagram: and so we move on.

GUESTS STEPPED INTO THE SKY

The show took place inside a cloud-emblazoned structure, on which a digital sign reading “Heaven on Earth” scrolled. Inside, it was more of the same, with blue floors, walls, and benches dotted with fluffy white cumulous. At the centre of the space was a huge tree trunk, which was surrounded by giant scissor, thread-and-needle, pencil, and paintbrush sculptures, which Abloh explained were inspired by the craftspeople who make LV’s iconic trunks (with the tree trunk itself also a tongue-in-cheek reference to this, because lol).

AS USUAL, THE FROW WAS PRETTY MAJOR

With the likes of Kerwin Frost, Migos, and actor Kris Wu among the audience. Cutting it pretty fine was Bella Hadid, whose last-minute entrance was nothing short of iconic. Cue the ‘Me trying to get my crush’s attention’ memes which will no doubt start dropping any minute now.

“Don’t let your day job define you” explained the show notes, with a series of v office-appropriate tailored styles in muted, subdued colours the first looks out on the runway. Slowly, models wearing more playful, experimental ensembles made their way around the space, with oversized leather trenches, shirts with monogram cut-outs, and boxy jackets and trousers embellished with glittering crystals all on the line-up. Post-show, Abloh explained he was ready to leave streetwear behind and try something new: “I want to push the industry in a different direction – not just sit in a comfortable spot and be like, ‘Oh, commercially it’s viable to just sell sneakers and jeans’. It’s fashion: everything goes in a cycle, things will die, things will come back. I want to propose tailoring.”

Elsewhere, classic overcoats, slim pants, and blazers were finished with ruffle detailing to hips, shoulders, and lapels. Accessories, meanwhile, came in the form of neon earrings, fingerless gloves, and hats, alongside skewed iterations of LV’s signature bags and trunks (some of which had speakers in-built).

THE SHOW FINISHED WITH A SERIES OF CLOUD SUITS

...which mirrored the aesthetic of the show’s setting, and lent the whole thing some pretty surreal vibes. Much like Alessandro Michele at Gucci, for AW20 Abloh was intent on channelling a sense of childlike wonder into his collection, re-coding the traditional suit into “a symbol of craft and creativity”. The sky-inspired print was emblazoned across crocodile-effect bomber jackets, a crystal embellished shirt, and classic blazers. Welcome back, Virgil, we've missed you!