Taking place at Madrid’s Museo Nacional de Ciencias Naturales, the label delved into its cabinets of curiosities for inspiration this season 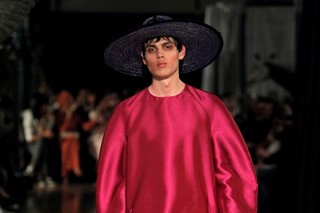 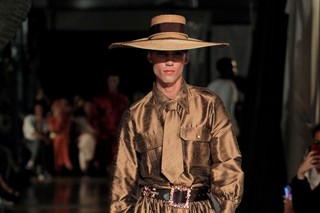 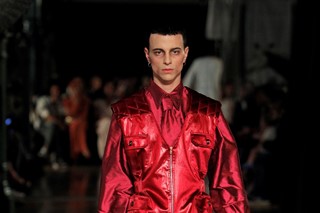 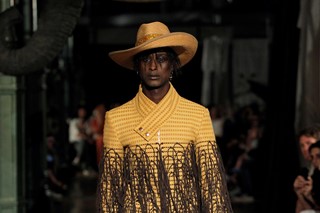 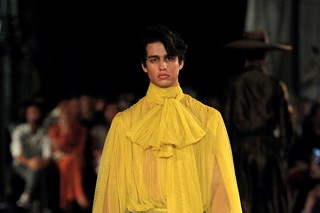 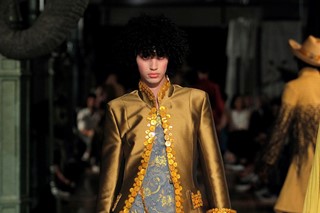 At dusk on Sunday night in the Spanish capital of Madrid, a huge crowd descended on the Museo Nacional de Ciencias Naturales, where the most anticipated show of the city’s biannual fashion week took place: Palomo Spain SS19.

At the invitation of designer Alejandro Gómez Palomo, guests – for the most part, made up of beautiful boys and girls pledging their allegiance to the label in full Palomo looks – weaved their way through the dark museum’s corridors and exhibits of taxidermied animals into the space’s grand main hall, where the skeleton of an enormous blue whale loomed over rows and rows of chairs.

It was a venue befitting the dramatic, sensual nature of Palomo’s inimitable aesthetic, and echoed the sense of wonder and thrill that his clothing has become known for. This season, the designer told us, his inspiration came from the hushed museum’s cabinets of curiosities, and what building one of your own might look like now, in 2018. “The collection is called Wunderkammer this season, and it’s really about curiosity, that’s where it started,” he explained post-show. “It’s about being curious about the world and about fashion, and I had in mind this beautiful boy who travels the globe looking for these incredible objects that fuel his imagination. The clothing is a reflection of that, about how you build your own collection of Palomo Spain pieces, and the way that makes you feel.”

“The collection is called Wunderkammer this season, and it’s really about being curious about the world and about fashion. I had in mind this beautiful boy who travels the globe looking for these incredible objects that fuel his imagination” – Alejandro Gómez Palomo

As with his previous collections Objeto Sexual, Boy Walks in an Exotic Forest, and Orlando, Palomo is part of the next generation of designers putting forward a new way of dressing for men, as lines between gender are on their way to becoming non-existent and men seem more open than ever to embracing sexuality and femininity when it comes to the clothes they’re wearing. For SS19, long silk and chiffon tunics were edged with mother-of-pearl buttons and feathers, petal-hemmed bustiers in delicate brocade were paired with slim cigarette pants, and tailored suits with flared trousers were rendered in rich, pale-hued tweeds run through with metallic threads, with references ranging from Victorian nightwear and safari-style suits, to religious vestments and 19th-century aristocratic dress.

Palomo was also kind enough to start off guests’ own cabinet of curiosities on the evening of the show, leaving a small box that read Wunderkammer on each chair. Inside, was a glass slide encasing a square of his actual blood, marked with his name and his blood type, Rh 0+. “I want everyone to have a piece of Palomo Spain, and thought this would be a good start,” he laughed. “They took about eight bottles of my blood. It was actually quite intense.”

Following the SS19 Wunderkammer show, we sat down with the Spanish designer on a hot, dusty side street in Madrid to hear more about the collection, his influences, and creating not only a brand, but a scene too.

ON ‘THE CABINET OF CURIOSITIES’

“The collection came from the idea of buying your first piece from Palomo Spain, and then adding to it to create your own so-called cabinet of curiosities. It’s not about having something for one season and then never wearing it again, it’s about having these pieces forever and building them up in your wardrobe, and each piece being given value the more you wear it, like a truly sentimental value. I wanted to build something more personal than just clothes. But then it also came from time I spent in the house of Lorenzo Castillo, who’s a very important interior designer in Spain and a good friend. He was showing me round his house and there were all these porcelains and shelves full of coral, and horns, and all kinds of incredible pieces, some of the most beautiful and weird things I’ve ever seen. It was really inspiring.”

ON THIS SEASON’S PALOMO BOY

ON HIS BEAUTIFUL MODELS

“We always pay a lot of attention to the casting, it’s something we really enjoy. It’s really beautiful when you find people that connect with your clothes and you can see they’re proud to be wearing them, and they’re adding their own personality to the pieces and bringing them to life. So the casting has always been a big thing for us – you know, we started out casting friends, and then we were putting normal guys in the show, usually guys who were gay and who felt comfortable in flamboyant clothes. And now we have professional models, of course, but we still look for the boys we know really want to be in the show, because at Palomo you don’t just do an hour before the show and then you leave – we have to spend time together and get to know each other, we have to have full hair and make-up sessions, and we all have to understand each other and the clothes.”

“I actually have quite a lot of straight customers, although the number is fewer than those that are gay, of course. I think it’s an interesting time and eventually we’re going to find the balance between the two: I really want to see straight men wearing my clothes! In the Wunderkammer collection I actually think there are many pieces – beautiful blouses, and tailored styles – which can be very masculine. I really want Palomo to be for everyone, I don’t want to just design for gay men, as I think that’s very limiting. It’s an interesting time right now, because I think men are becoming much more open when it comes to fashion.”

ON SHOWING IN MADRID

“We were actually supposed to show in Paris again this season, but because there is so much change happening at Palomo it was impossible, so we’re going to do January in Paris, and July we’re here in Madrid. But I love Madrid, and when you show here it’s just so incredibly nice – you can put an idea together and present it in the way you want, you know, you can take over the museum, and everyone is very supportive because they know us. In Paris, things are so much more difficult, getting the go-ahead to show in a museum, being able to invite 600 guests... We will go back to Paris, but we need to work out how to recreate that grandeur that Madrid allows you first.”

ON CREATING A PALOMO SPAIN COMMUNITY

In Madrid there is a huge creative scene: we see each other at this party, and that event, and so on, but for me something that is important about Palomo is that I’m bringing people together who wouldn’t normally meet – these very underground boys, and aristocrats, the young and the old, the posh people and the less sophisticated, which goes for both my collections and the people at my shows. It’s about connecting people through an experience and really creating a special scene that congregates at the Palomo shows.”

ON NOT LIVING IN MADRID

“I live in the South of Spain, in a quiet village in Andalusia, with no fashion influence at all. I love it – it’s so nice to be able to go there and just focus completely on work, you know, I live on top of the studio in this enormous beautiful house, and when I’m there I never escape the job. I wake up in the middle of the night feeling inspired, and I can go downstairs to the studio and take the fabric and have a piece made by the morning. It’s this feeling of never disconnecting from what I do, which I love. I wouldn’t be able to do it in Madrid, there are so many social things and partying that would just distract me.”