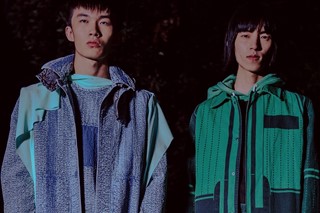 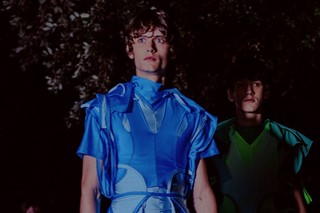 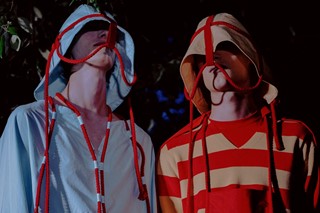 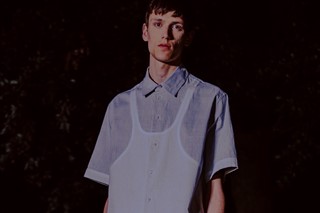 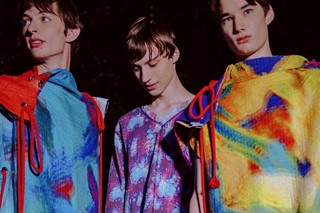 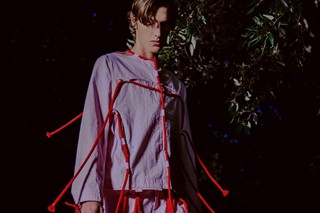 It made sense that Craig Green chose the Medici family’s Boboli Gardens as the venue for his Florence guest spot at Pitti Uomo last night. Like the walking sculptures that inhabit his runways, the fragrant geometric grounds are home to a vast collection of statues that appear with ceremonial grandeur at the end of a gravel avenue or surprise you as you find a secret space behind an imposing hedge. It’s also a stark yet romantic place, where your perspective changes at every garden path turn. And perspective was very much on Green’s mind this season. Here’s what went down.

THE COLLECTION WAS ABOUT REAL LIFE ANGELS

Green had come across a photo of a woman who appeared to have a black halo or aura around her, formed from another person’s shadow. “Almost her guardian angel,” he said. At the same time, the team had been constructing running tops that looked as if their wings had been clipped off “in a kind of abstract way” and of course explored the workwear that always informs Green’s collections, styled by Dazed’s creative director, Robbie Spencer. This time it was the simplistic lines of a cleaner’s tabard, or the smock a hospital worker might wear, which were elevated to something almost ceremonial. It was a really beautiful idea: honouring the angel workers that quietly surround us and tend to be much overlooked in a society that instead worships gilded but often empty celebrity. “They kind of have your life in their hands,” Green said. “I’ve always liked the idea that someone can become like an angel through doing good in their lives. It puts the value in a person rather than putting value in objects.”

THERE WERE HORROR REFERENCES

Like all the best people, Green is a horror movie fan, and last night had a definite twang of good and evil battling it out – or perhaps just accepting each other and coexisting. The black halo reference had a sinister side to it: the collection’s sculptures were carried on the models’ backs and traced the body like the chalk lines from a crime scene, only rendered in blood red. It was also quite It Follows. Or a target silhouette at a shooting range. And the second Green mentioned the dyed and shrunk prints that resembled old TV static you couldn’t help but think Poltergeist. They’re heeere!

THE PRINTS WERE LO-TECH POSING AS HI-TECH

In line with the team’s explorations of different perspectives and how that can change the appearance of things or even warp reality, prints that looked like they were vibrating or almost 3D were anything but. Instead, various kinds of ‘normal’ fabrics had been printed and then placed and layered to give that effect.

IT WASN’T A POLITICAL STATEMENT

It was hard not to think of this tribute to the everyday worker in a political context, but Green said he doesn’t approach his work in this way. “I think everyone is reacting to the environment around them or things that feel right at the time but I don’t aim for it to be political. It’s not a political reference. Usually in the beginning we don’t even know what it’s about. It’s not like we go to make a top that looks like someone’s had their wings clipped. I guess it’s more of a reaction-y kind of process. Lots of cutting up and remaking and throwing away kind of process!”

AND... WE GOT A PEEK AT THE OTHER SIDE

From the invite that had a cut-out circle to the giant black curtains that divided the Boboli lawn and revealed the models as they filed in and out between them, the show gave us glimpses into what’s on the other side. An idea of an afterlife, perhaps, as Green put it. The last three looks – monk-like blankets tied with ropes – gave a psychedelic view on that with what appeared like bright ghostly images, aura colours and a blurry angel blowing a trumpet. Whatever lies behind the veil, Craig Green was optimistic about it: “There’s positivity. That idea of hope in some way.”