On Thursday afternoon, in the dark underbelly of Tbilisi’s Dinamo Stadium, Gosha Rubchinskiy kicked off the city’s Mercedes-Benz Fashion Week with an intimate talk. Touching on art, fashion, and youth culture, he also opened up on his next moves and what the future might hold, in light of his revelation that the brand as we know it would cease to be after the AW18 collection drops (RIP).

Taking to the stage in the disused swimming pool that nightclub Bassiani – think a smaller (and more sweaty, if that’s even possible) iteration of Berghain – calls its home, bathed in bright blue light with a notepad in front of him, the Russian designer also performed a unique monologue, using synths and looped recordings to punctuate his statements, as he referenced progressive artists including Joseph Beuys, Guy Debord, and Marcel Duchamp.

Addressing the ways in which fashion has changed in the ten years since he founded his eponymous label, the way the people communicate today, and his role in dispelling misconceptions of Russia, he also took questions from an enraptured audience on everything from his friendship with Demna Gvasalia, the importance of Tbilisi staking its claim on the global fashion stage, and a certain controversial rapper’s recent neck tattoo.

Here’s what he had to say.

HE STARTED DESIGNING CLOTHES TO UNITE A DISASSOCIATED YOUTH

“We live in a time when politics and politicians and what we see on the news does everything to disconnect and separate people in all countries, and divide them from one another,” the designer told the audience, before going on to confess he felt a sense of duty as an artist to unite people. “Everywhere now we see young people in lines for new t-shirts, waiting for them. I think we can all recall various times in history when energy is bestowed on a certain type of art. There was a time for rock music, and a time for cinema, then electronic music. Now, it is time for this energy to come from the art of fashion – young fashion, street fashion, streetwear. And I think young people who stand in lines are also waiting for hope – much like their parents did stood in line waiting for the chance to buy a vinyl record.”

Speaking of his first collection, Evil Empire, which he presented way back in 2008 in Moscow, the designer admitted he never thought his brand would reach quite as many people as it eventually has – or that Gosha Rubchinskiy would become a brand at all. “Honestly, we did our show ten years ago, but we never thought it would grow into what it has, or that we would seriously be making and selling clothes,” he admitted. “I can recall my first interview after that show, when journalists came over to me and asked: ‘What exactly have you shown us today? Is that fashion? Will that be fashionable?’ I said that what we’d shown them that day was going to be popular for at least ten more years. I didn’t know. I just decided.” 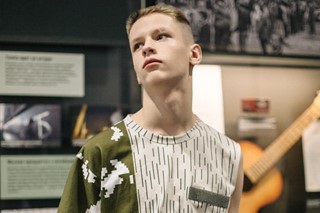 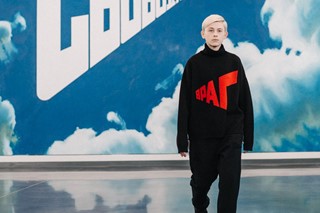 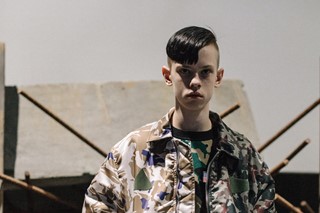 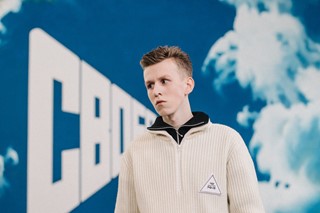 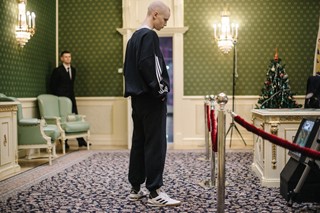 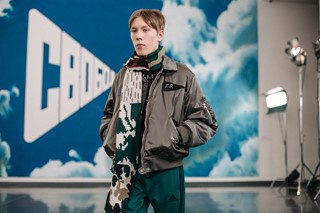 THE BRAND WAS ACTUALLY AN ART PROJECT

Discussing his various creative outlets, Rubchinskiy told the audience he didn’t consider himself a fashion designer at all: “I’m more of a storyteller,” he explained. “If you have something to share, you can share your ideas in a huge number of ways. One of them is creating a collection, but I’ve always been interested in photography and art. Really, the Gosha Rubchinskiy project, which will come to an end this year, was nothing if not an art project. Another artist might have created a painting or filmed a movie, but this was the form of expression I chose. A ten-year-long project. That sort of self-expression.”

...AND CAME TO AN ‘INSTINCTUAL’ END

“Right now, we’ve finished this form of expression and we’re picking up a new one. In stages. Like stages of a rocket flight,” Rubchinskiy said. “Every idea has its lifespan, its own power and energy resource. I’ve said what I wanted to say with this project, and the state it’s in right now is just the right state to finish this story and begin a new one.”

The designer spoke of his plans to focus on PACCBET – which he founded alongside friend and collaborator Tolia Titaev – now his own label is no more. “The sunrise comes soon,” he said of the brand, which means ‘sunrise’ in English. “Ten years had passed (since Gosha Rubchinskiy had launched) and the kids who were first into it who were 14 then were 24 now. And there came a time for them to start a project of their own. I really wanted to create a project that focused on skateboarding in Russia, for skateboarding kids. So we decided to make a real skate brand, not only myself but a crew of people, a group of people who skate themselves. They were the leaders of the project, able to lead a new generation of people. It also symbolises hope for young people in Russia and everywhere else. But mainly, a hope coming out from Russia.”

...WHO HE THINKS WILL LEAD US TO A BETTER FUTURE

“My opinion on this is that the young people I see and work with will change everything. It’s in their hands. The old guard, sooner or later, will leave, and the young people will take things into their hands. And I see these hands are stable and safe, and one of my missions is to help these hands forge ahead,” Rubchinskiy explained. “As I said, the sunrise comes soon.”

“The PACCBET logo is a sun, and much like its rays, the directions for the brand’s development are diverse,” Rubchinskiy explained. “Right now our focus is on our big collaboration with Carhartt which we started in January, and we’re planning more big collaborations in the future, too. We’re also opening a skating supplies store in Moscow. We want it to be a space where kids can come and buy a board or just talk and hang out. So sort of a source of power for the next generation in Moscow. We’re opening it in June.”

Though he explained he was happy to see Cyrillic text making an impact worldwide, the designer himself is over it. “I think we gave the cyrillic alphabet a part to play – the lead part – and it played itself out,” he said. “But at the moment I’m optimistic about the Georgian alphabet and its emergence in fashion. I have great hopes for it. Maybe I’ll predict something right now: a fashion for the Georgian alphabet. Like I say, don’t wait for something to become fashionable. You have to believe in it and pronounce it. So I pronounce the Georgian alphabet fashionable from now on. That’s how it will be.” Designers, take note.

“My advice would be to find within you something that you really want to tell people. Usually, people don’t just buy clothing, they buy stories. You really need to find that story first – find the song you want to sing. And if that song is backed up by talent and attractive, people will love it, and sing along with you” – Gosha Rubchinskiy

IT’S NOT JUST THE GEORGIAN ALPHABET THAT’S INSPIRING HIM, THOUGH

“Sometimes people send me photos from China where Chinese aunties and mums are wearing bedazzled pink shirts with the Gosha logo on them. I’m thinking of maybe creating a collection like that one day,” he joked – or maybe didn’t, only time will tell.

HE HAD SOME ADVICE FOR THE YOUNG DESIGNERS OF GEORGIA

And really, all aspiring designers around the world. “My advice would be to find within you something that you really want to tell people,” he advised the audience. “That doesn’t mean just fashion or design, though. You need to know what you’re telling them. Because usually people don’t just buy clothing, they buy stories. But you really need to find that story first – find the song you want to sing. And if that song is backed up by talent and attractive, people will love it, and sing along with you.”

AND KANYE’S TATTOO? NOTHING TO DO WITH HIM

“What Kanye posted on Twitter wasn’t designed by me, but by Valentin Fufaev who actually played the soundtrack earlier today,” the designer laughed. “You’d better ask him about it.”