The founders of NYC’s most radical label discuss how to ‘create, heal and learn in a world as ugly as this one’ with make-up artist, Gogo Graham

Taken from the spring/summer 2018 issue of Dazed. You can buy a copy of our latest issue here.

The morning Women’s History Museum showed their first collection in 2014, a biblical rain shower caused New York’s famously stoic Subway system to grind to a halt. Since meeting when they were 20, Amanda McGowan and Mattie Rivkah Barringer have embraced this kind of apocalypse, reifying historical female struggle via clothing that feels crafted out of chaos – and lives supernaturally close to the body and skin. Having always eschewed traditional show formats in favour of performance (Collection 005, which debuted in March, was no exception), the duo’s first four collections of uncanny collage-wear landed them a solo show at Gavin Brown’s Enterprise in January. The exhibition gave McGowan and Barringer space to not only show clothes but to emphasise the community at the heart of Women’s History Museum; they invited peers to host events, including self-help make-up tutorials by designer Gogo Graham, whose collections have celebrated trans and gender-non conforming sisterhood. Here, Women’s History Museum ask questions of Gogo, and Gogo asks questions back.

Naomi Osaka: ’Being unique is my strength’At just 24 she’s won four Grand Slams, lit the Olympic torch, and changed the way we talk about mental health in sport forever. Hitting back against her critics, Naomi Osaka reflects on the quest for self- worth that transcends trophies
Women’s History Museum - spring/summer 20185 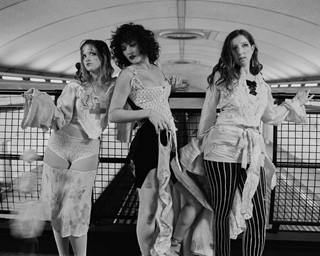 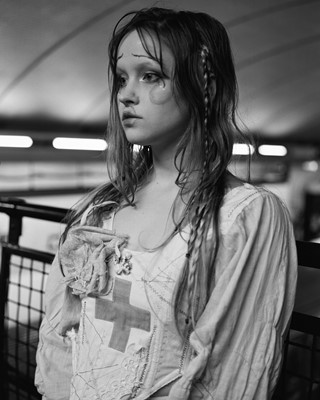 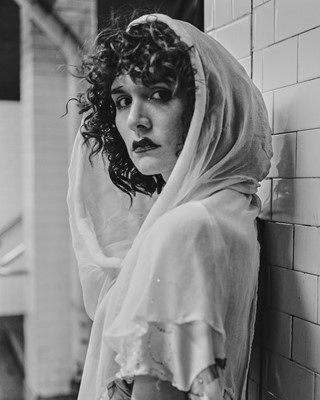 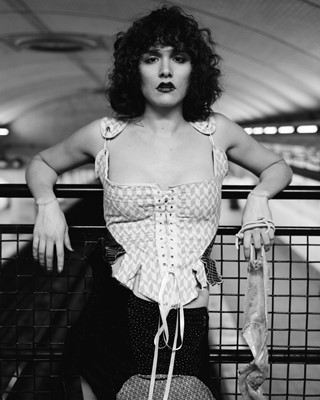 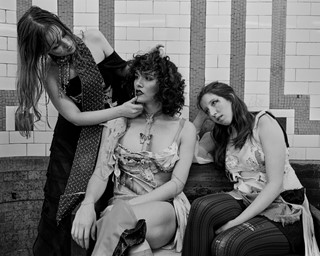 Women’s History Museum: What gives you momentum to create a new fashion collection? What references were you thinking about with your latest collection, Vicky’s Secret?

Gogo Graham: To be honest, after my last show in the fall of 2016, I wasn’t sure that I would have any other shows. I knew that I would probably make lookbooks in the future, but didn’t want to proceed without a solid financial plan. For past shows, I hadn’t made it a priority to pay models, and I wanted to be able to do so for Vicky’s Secret... I’m now at a point in my life where sharing my creative work isn’t enough of a reason for me to put on a fashion show. It has to benefit the people whose bodies are on display. The inspo for this collection came from a silly transphobic joke I remember from grade school regarding the secret that Victoria from Victoria’s Secret was keeping (surprise: it’s that she’s trans). The bright colours and freaky shapes they throw on those grinning, conventionally beautiful, sculpted and tanned women made a part of my brain break in a really good way. I took all of that and worked it into my other childhood love: PlayStation role-playing games.

Women’s History Museum: What’s the relationship between your artworks and your make-up?

Gogo Graham: The two are related in that I always start with something small and build on that rather than imagining a specific object and then working to make it happen. I’m not good with translating a specific idea into physical form; to me the idea will always be better than the result of the attempt to make it real. I don’t like disappointing myself, so I approach both with as few expectations as I can allow myself to have and just keep adding the building blocks until I’m happy.

Women’s History Museum: Are you interested in masks,be they real or metaphorical?

Gogo Graham: I think about masks all the time. We wear masks for different occasions–some make people feel good and safe, like a full face of make-up, protective eyewear, respirators, an artefact from our ancestors, something that obscures the shape of the face from onlookers, a smile to someone who needs it. Others exist to harm or deceive. All of them interest me. I would never choose to live in a world without masks.

Women’s History Museum: Would you ever consider creating a beauty institution, guidebook or publication of some kind? We think people need your help and instruction.

Gogo Graham: If I could do it all over again, I would go to cosmetology school or medical school, and then study plastic surgery. There is nothing more fascinating to me than utilising tools specifically designed to enhance a person’s physical appearance to improve self-image, and nothing I love more than helping femmes feel beautiful. The thought of creating an institution or publication specifically for the purpose of spreading the word of beauty really gets me going. Maybe one day.

Gogo Graham: If you had the means to build the dollhouse of your dreams, what would it look like?

Mattie Rivkah Barringer: It would be a multi-storeyed rambling boudoir with walls made of striped sugar. It would also have a wild garden which required no maintenance, a vast library and a self-stocking kitchen. It would also not be on this planet.

Amanda McGowan: It would have a mid-century meets 1800s aesthetic and be filled with animal-human hybrids. There would be full electricity and lots of quilted calico window treatments. The house would fit in my pocket.

Gogo Graham: What are your most profound early experiences with clothing?

Mattie Rivkah Barringer: As a six-year-old I was forced to play in a soccer team. I attended an ‘awards ceremony’ at the local pizza joint, wearing a stretch lace red and black evening gown out of my dress-up bin. When I got there everyone was in their soccer uniforms. I didn’t understand why everyone else wouldn’t also want to accept their trophies in eveningwear.

Amanda McGowan: The most memorable was in fifth grade, when I put together an outfit I felt really proud of for class picture day. I had gotten what I now realise were baby blue silk pyjamas from Limited Too and received all these compliments from my classmates. As a shy kid that was the first time I (realised) you could connect with people around you without saying anything at all.

Gogo Graham: When did you realise that you two needed to collaborate in this way?

Mattie Rivkah Barringer: When we met in college we started living together and sort of collaborating on things organically. We were obsessed with clothing and tried to have a fashion blog because it was around that time, ha!The way that WHM formed was less premeditated and more out of boredom and isolation–and a desire to create an alternative reality.

Amanda McGowan: We felt completely isolated in New York–we were each other’s only friend for a while. We made things as therapy and to comfort ourselves, I think. For a long time we had this ongoing joke about ‘Women’s History Museum’ being a fake art institution that housed all the things we made. As we got more interested in making clothing we tried to come up with a name for what we were doing and every title seemed so contrived, so we thought, ‘Why not just call it Women’s History Museum?’

Gogo Graham: Can you describe your relationship with make-up?

Mattie Rivkah Barringer: I don’t feel like myself without it. I want to have my lips and brows tattooed. I wanted to start wearing falsies every day after wearing them on Halloween in second grade. I began wearing make-up daily in fifth grade, after begging my mom for years. (Love you, Mom!)

Amanda McGowan: Contrary to Mattie, I don’t feel like myself in make-up. I like having my friends do my make-up occasionally, and I prefer it to be some kind of character. I like to have a secret identity other than my own in make-up.GG: What does the most evolved form of Women’s History Museum look like?

Amanda McGowan: I think it’s an actual physical institution, kind of like Xavier’s School for Gifted Youngsters in X-Men. I would love to have a physical place where people could gather, feel supported, create, heal and learn in a world as ugly as this one.