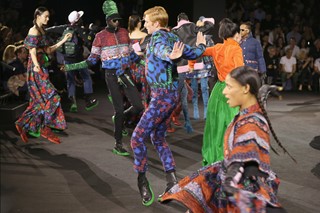 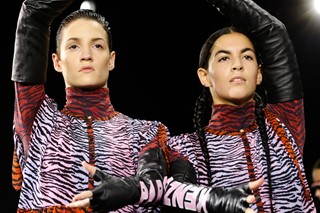 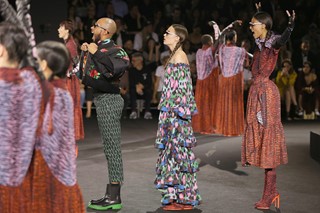 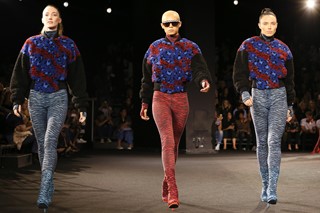 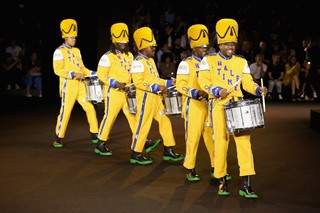 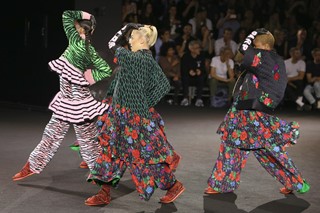 Last night in NYC, Kenzo officially debuted their new H&M collaboration in an all-guns-blazing show, making them the first luxury house owned by mega corp LVMH to team up with the Swedish fast fashion giant. It was the latest in a series of yearly designer partnerships that so far has included Comme des Garçons, Maison Margiela, and, who could forget, Balmain – which sent frenzied shoppers into punch-throwing overdrive when it dropped in stores. While there wasn’t an army of Kardashians or Jenners on hand to ignite a social media firestorm, there was more than enough excitement – and you can bet that will translate to queues around the block come the launch on November 3rd. Here’s what went down.

Having teamed up with photographer Jean-Paul Goude (most known for his work featuring ex-lover Grace Jones) for their very first Kenzo campaign, Carol Lim and Humberto Leon reached out to him to get him involved for the collab imagery. But not only that – they wanted him on board for the event, too, and brought him in to creative direct. Held at NY’s Pier 36, the show was nothing short of an all-singing, all-dancing spectacular – a black curtain dropped to reveal trumpet players and dancers, while models vogued around the space in the designs, accompanied by a live marching orchestra in yellow uniforms. It was a totally wild, totally Kenzo celebration.

IT WAS A 110-LOOK EXTRAVAGANZA

The last 18 months may well go down in fashion history as the time that Vetements made the hoodie haute, but we’d do well to remember that Lim and Leon have played a key role in the adoption of street-ready graphic tees and sweatshirts into the high fashion lexicon, making them fitting partners for a high street collab. Those purse-friendly pieces featured throughout the collection (printed on organic cotton), alongside more collectable garments – like a dress made of hundreds of ribbons or a psychedelic furry pimp coat. Lim defined the spirit of the collection as one of “joyfulness”, and it wasn’t hard to see what she meant – there was pink leopard print, red zebra and a whole lot more besides.

THE COLLECTION LOOKED TO THE ARCHIVES

The designers were keen to stress that when you buy into the collection, you’re buying into a piece of Kenzo fashion history. Key pieces in the collection – including the ribbon dresses – came from the original archives of the house’s founder. “Humberto said, ‘It would be really great to take the pieces from the archive and celebrate those pieces along with pieces we created in our first collection and have a true conversation between us and Kenzo Takada,’” said Lim in an interview with Vogue. With that in mind, they incorporated several elements from their own collections for the house, further combining their prints with Kenzo’s originals.

It’s hardly surprising that the show attracted a fair few famous faces. As well as stars of the campaign and lookbook such as Chance the Rapper, Iman, and make-up artist Isamaya Ffrench, the turn-out included recent Dazed cover star Soko, Lupita Nyong’o and Chloë Sevigny, who actually modelled in Lim and Leon’s first show for Kenzo.

THE SHOW BECAME A GIANT PARTY

Coming out to take their final bows, Lim and Leon pulled the audience out of their seats and, as the lights went down and the music volume went up, silver confetti streamed into the air. The central space transformed into a VIP area complete with Kenzo cushions, and Sevigny and Jean-Paul Goude could be spotted dancing with the designers. There was also a pop-up shop adjacent to the runway, where editors could be seen merrily spending hundreds of dollars on the collection.

While the evening’s entertainer was kept a closely-guarded secret, all bets were on one of the campaign stars performing. But although Chance the Rapper – who appeared alongside the likes of Iman and Suboi in the Goude-shot visuals which debuted last month – was tipped to take to the stage, the night’s guest was none other than Ice Cube, who took to the stage and performed several of his hits including “It Was A Good Day” and “You Can Do It”.