With Arca DJing and models stripping off to jump in the jacuzzi, Shayne Oliver considers what’s next for HBA 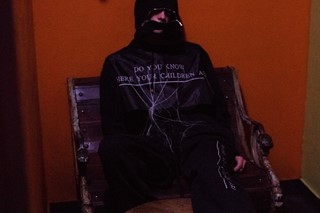 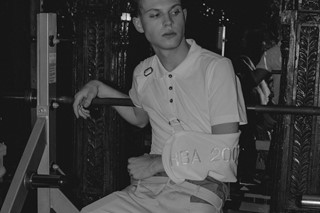 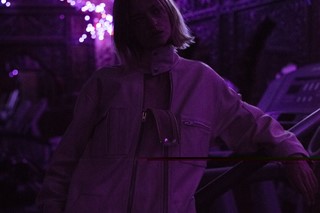 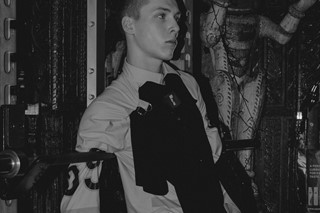 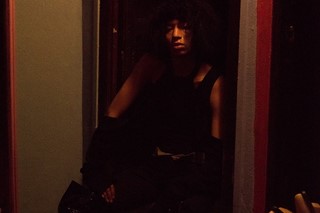 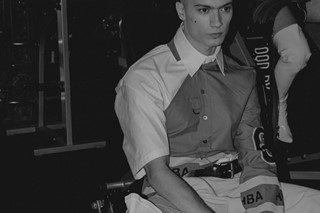 “I think that I've been pushing boundaries for quite a while, I’m just in the mood to relax a bit,” explained Hood By Air’s Shayne Oliver yesterday afternoon. Dressed in the leather bar version of an NYPD shirt, he was standing in the street outside Sun City, the Parisian gay sauna in which he had chosen to show his SS17 collection. “Instead of inviting people to be at our atelier, we’d rather bring them to a sauna so they can feel a bit relaxed. But I guess it didn’t do that – it did the opposite,” he laughed.

He was right – the environment where the presentation was staged wasn’t what most would consider calming. Guests entered down a dark corridor hung with red and green lights, before ascending a twisting staircase and spreading out through a series of winding, narrow hallways, standing with their backs against the walls or in the doorways of numbered rooms. The music – including an industrial remix of “I Touch Myself” and series of pornographic moaning noises – was deafening, and the light was a red glow, illuminating only the strangers who stood nearby. It was like the X-rated, adult version of a funhouse – only instead of horror-themed decor, there were murals of orgies.

“I told the models to cruise and play with the crowd. To act like they were trying to get a little action” – Shayne Oliver

Models emerged  from the darkness to stumble through the audience, stopping to sit in the doorways or flirt with audience members (“I told them to cruise and play with the crowd,” Oliver said. “to act like they were trying to get a little action”). They wore bum-flashing chaps, refashioned striped rugby shirts, and hoodies and trousers with slogans including ‘Do you know where your children are’ and ‘dead inside’. This, Oliver said, was his version of loungewear – “just not trying to do fashion.” One model sported a Hood By Air sling, signifying healing. “A lot of the things are based on braces and casts. we've been doing these elongated silhouettes for a while and we wanted to make function out of it,” he went on. “So the next step for me was to make it a sort of brace, something that would care for you, or wrap you as opposed to extending you."

Soon, the models moved downstairs, where the music was so loud it hurt your ears – thanks, it turned out, to longterm collaborator Arca, who stood DJ-ing in a pair of PVC thigh high boots. After pushing past vending machines serving poppers as well as skittles, red-lit shower rooms where sweat was dripping from the ceiling, and signs informing patrons that there was no penetration allowed in the pool, you found yourself in front of a large jacuzzi, where the cast had assembled on deck chairs. One model stripped off and jumped in, swimming just in his boots, and soon he was joined by others – illuminated by a flashing strobe, they frolicked about in the water. It was about as hedonistic, sweaty and underworld as Paris Fashion Week gets.

Out in the daylight, Oliver explained the role that certain high fashion copycats had played in the collection, and indeed in his state of mind recently. "We work hard to be new and fresh and people just take that and put it into their womenswear, or take it to somewhere else. It’s a bit discouraging." He pointed to his brand’s early adoption of gender fluid runways as an example of this. It’s easy to understand Oliver’s frustration; the imitators are certainly out there. In a sense, it’s understandable – over the last ten years, the label and its collaborators have gained a reputation for being true pioneers, whether in terms of the clash of aesthetics and cultures they represent, or their radical approach to casting and fashion presentation. Oliver’s is a vision that is truly unique and original, and won’t ever be replicated – not successfully at least.

But the show wasn’t about bitterness – its message was one of healing and growth, as Oliver considers what’s next for Hood By Air. “It was about illustrating the idea of healing, and moving on,” he explained. “Maybe it's time for us to tackle the higher end? Instead of making the things that we covet – making things that everyone covets.” After a decade, it’s natural that he would be considering the brand’s future. “I'm still figuring it out,” he shrugged. “But for me, I'm trying to relax and rebuild and get a new vibe. Inner strength I guess!”