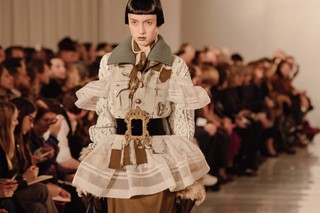 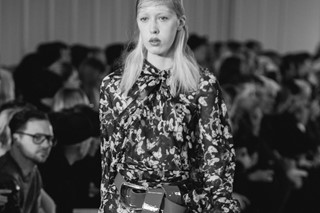 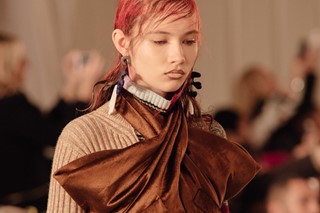 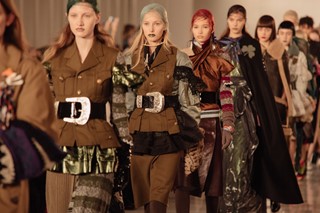 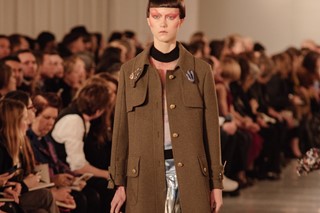 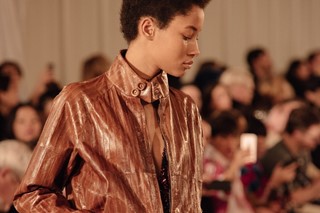 In the press notes for the latest Maison Margiela collection, the house said that the collection was about having a ‘raw-core’ touch. Would that be a direct opposite to the formerly buzzed trend movement of ‘normcore’? If so, then bring on the ‘raw-core’, as what it seemed to mean was the explosion and ripping up of wardrobe archetypes so that eccentricity created by unusual fabrics and finishes could shine through. It was an idea that took hold at John Galliano’s last Artisanal collection, but here the hybrid garments were more grounded and veered towards recognisable ladylike tropes.

Many of the models, for instance, wore twisted neck scarves and strings of pearls. These weren’t pearl clutching conservatives, though, as they’d then proceed to mash up army green suits with mini-crinis and giant rococo buckle belts. A housewife’s apron was rendered in plastic and sprayed with graffiti, worn over a prim and proper checked skirt suit. These ladies clopped about in the highest of curved-heeled loafers or stayed sturdy in patchwork hiking boots.

The fabrics ran the gamut from a Japanese lurex that billowed out into gowns and cape, resembling CosPlay get-ups, to vampy tiger print fil coupé to ribbed melange wool worked into cosy arm warmers and sensible jumpers. A print that looked like a Where’s Wally illustration had a mouse-like character pop up in a camo-esque repeat. In Galliano’s Margiela mix, one deliberately clashed with the other. Nothing was forced to make sense – and that has been the appeal of his work at the maison.

“We have progressed to an innate understanding of the Maison’s design elements and techniques, where traditional order is disturbed with emotion, immediacy, and the effect of a human glitch. Our intent was to unleash the desirability of our evolving Margiela wardrobe with full force.” This was the official quote from the house that articulated perhaps the general unstudied and forthright way in which Galliano has been creating his clothes – with experimentation always on his mind and, refreshingly, without too much regard for what will shift from shopping rails.

Emotions, feelings and characters don’t often come into the equation when discussing the majority of collections these days, and Galliano, with his work for Margiela, brings that to the fashion fore.