Inspired by the TV series with a following as cult as the designer’s own, Simons debuts a twisted take on America in tribute to David Lynch 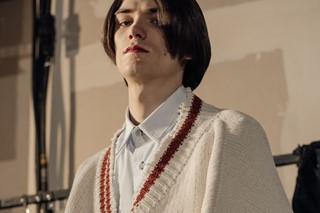 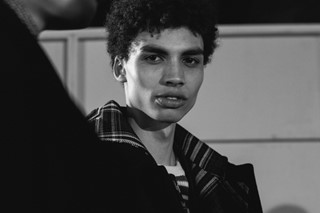 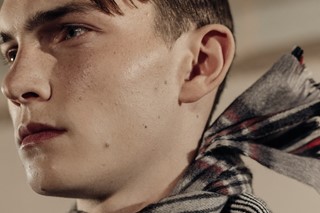 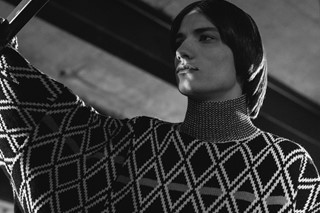 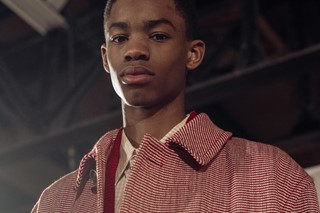 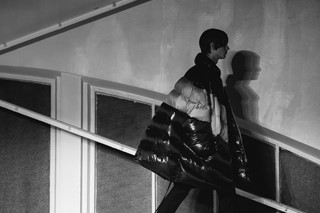 “She’s dead. Wrapped in plastic.” The words are those of Pete Martell, the man who has just discovered the body of prom queen Laura Palmer washed up on a grey, stony beach, her skin turned blue, blonde hair stuck around her face like a halo. So begins Twin Peaks, Hollyweird director David Lynch’s primetime trip into an all-American underworld, where the horrors of small town life are displaced onto demonic, surreal forces.

It was a world not too far from this one that audiences were plunged into at Raf Simons’ AW16 show last night in Paris – the first for his eponymous label since he announced his exit from Dior at the end of last year. Attendees stood in a maze of wooden walls, twisting and turning like the designer’s own personal Black Lodge, while the voice of composer Angelo Badalamenti, describing how he created Twin Peaks’ famous, haunting score, boomed over the speakers.

Models weaved their way (sometimes, disorientatingly, more than once) through the labyrinth in supersized Puffa jackets, tailored coats and moth-eaten jumpers, decorated with boy scout and Letterman style patches, and striped like sports jerseys. Trousers were cropped abruptly and tapered tight to the leg, creating almost comically unbalanced silhouettes – like when your new school uniform is far too big, or as if a gang of rail-thin high school punks had destroyed and appropriated the jocks’ precious status symbols. This was Americana, but through a subversive, definitively Simons lens.

“Actually, today is David Lynch’s birthday. I didn’t know. But I like to think that I am now dedicating this show to him” – Raf Simons

“Actually, today is David Lynch’s birthday,” the designer said backstage, smiling at the cosmic coincidence. “I didn’t know. But I like to think that I am now dedicating this show to him.” He remembered fondly how Twin Peaks mania engulfed him and his fellow students during his time at university, how they’d stage viewing parties to watch the show – and “talk about it all week.” Still, there was more to the collection than the twisted universe created by Lynch, even if it has developed a cult fanbase almost as fervent as Simons’ own. The notes handed out beforehand (an uncommon occasion for the designer – “I wasn’t going to explain it this time!” he said backstage, mid-explanation) came with a rich list of other references, including Martin Margiela, Cindy Sherman, Detroit, Scream, Halloween, A Nightmare on Elm Street, High School and more.

“They were all the things that were in my mind for this collection,” Simons explained. “That’s how I was thinking. I was trying to not think, ‘Ah, what kind of story should I make out of Cindy Sherman and Twin Peaks?’ you know – I didn’t want that. It was just very fragmented.” The focus was on creating a world rather than a narrative. Inspired by Sherman’s retrospective exhibition Untitled Horrors, the designer’s thoughts turned to the unsettling, to what can happen when things don’t go quite right. “I always think about nightmares, I’m always interested in horror movies, it has been coming back a lot. I always like making beautiful things...but it’s also interesting when something goes wrong, something’s weird, something’s dark...there’s very much this contrast.” Hence the collection’s name, Nightmares and Dreams – Simons was toying with the line between the two, and with a sense of the uncanny that defines them both.

The sheet of references ended with series of familiar phrases – “The last four on the list are the titles from four of my own shows,” Simons confirmed. The shows in question were Riot Riot Riot (AW01), Woe Onto Those Who Spit On The Fear Generation... The Wind Will Blow It Back (SS02), Virginia Creeper (AW02) and Waves (AW05). While this time last year the prints on his collection may have declared the archives “no longer relevant”, AW16 was strongly retrospective – returning to the exaggerated proportions of his past, and particularly the collegiate elements and oversized knitwear of Virginia Creeper.

But the collection also trod conceptually familiar territory, exploring teenage rebellion, youth tribes and the way that subversion can creep into a simple button down shirt – things that have been a lynchpin (sorry) of his work. “You take more time now and you start to see that after twenty years you have your own uniforms, things you keep on coming back to,” Simons explained, nodding towards his recent decision to dedicate himself entirely to his own label. As he smiled to a journalist backstage, offering him an interview the next day, “I have so much time now!”

If this collection were anything to go by, long may it continue.