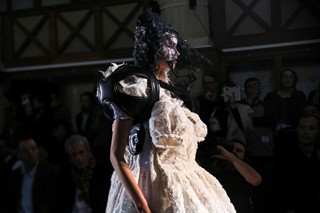 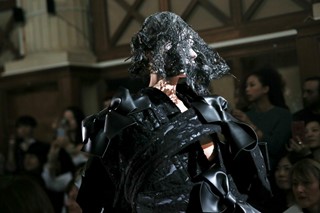 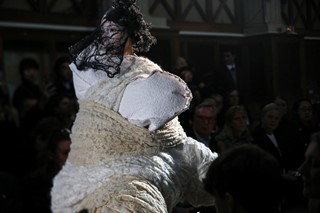 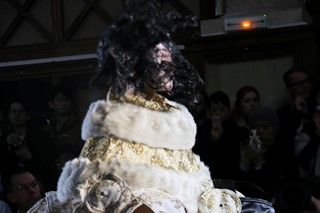 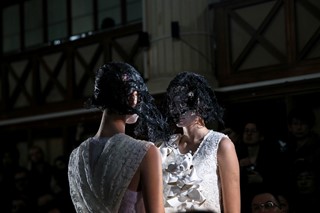 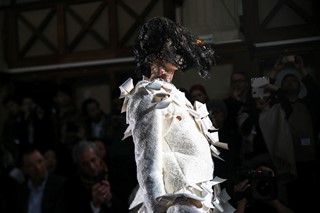 Think about everyone you’ve ever lost. And then think about how those emotions could be transferred into a raw expression where textiles and pattern making come together to emote, not necessarily to clothe. That’s what Rei Kawakubo achieved in her latest emotional opus. Afterwards, the show was simply described as the “ceremony of separation” – when you see someone off, you make them beautiful before they leave. And so it was that every aspect about losing someone to death was eked out, amplified and made undeniably beautiful. These figures of mourning were doused in the sheets of a deathbed, the satin puffiness of coffin interiors, the bows on funeral floral arrangements, and all the textiles associated with Victorian funereal attire (when Western society took mourning to extremes). Within this process of loss, we often struggle to see light at the end of a dark tunnel, and in one ensemble, a black circle with white lace peeking out from within it summed up this interplay between black and white – or being plunged into darkness when the light of life switches off. When Kawakubo enlarges and exaggerates forms on the body, it’s to mirror the largesse of emotion that Comme des Garçons shows instill within you. That’s why with only eighteen silhouettes, Kawakubo manages to say a lot. So much in fact that the audience were left tear-struck.

Songs of sorrow and longing looks:

Tracks from British composer Max Richter’s sophomore album The Blue Notebooks provided the main soundtrack. In particular “On the Nature of Daylight” built up to a crescendo to tug at heartstrings. As the music swelled, so did the each ensemble, exploding in volume with cage-like structures, lace and velvet covered bulges and a stream of white bows. It was as though the act of mourning was purposely besieging every model. These simultaneously serene and ghostly figures moved slowly down the runway, and as they passed each other, a tender look of longing was exchanged. In a nod to the way we lock ourselves away to deal with grief, every model had a hardened lace veil shrouding the faces or they were obscured by a sculptural cocoon by Julien d'ys. Unlike most Comme des Garçons shows where the soundtrack will suddenly cut off abruptly, Richter’s song carried on, and a light shone brightly at the set, willing for Kawakubo to emerge (of course she didn’t). The applause thundered and our hearts soared.

Kawakubo’s last Comme des Garçons collection was about as intense as it could get. You emerged seeing red, impassioned and fuming because so few shows were able to elicit such emotion. That emotional journey continued here. Instead of anger though, we turned to sadness and the feeling that we need to put things into perspective so that we treasure what is dear to us. Eyes were moist. Real tears were shed. We momentarily suspended thoughts of how to sell it or shoot it. We were looking at a collection, not with our minds, but with our hearts. “Epic,” was the word repeatedly heard amongst after show chat. Outside as the sun was gorgeously setting over the Jardin des Plantes, people lingered on to take it all in. When a swell of emotion is that big, you just have to let it wash over you.