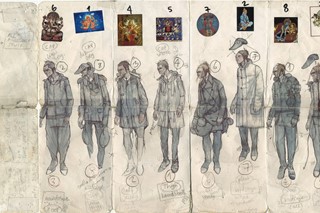 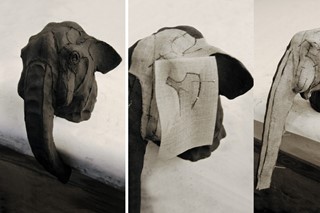 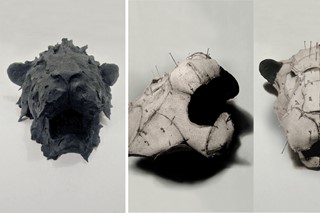 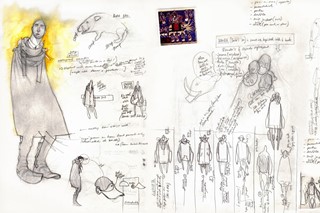 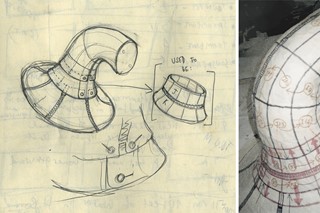 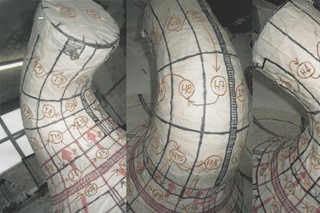 Today mark’s a new virtual venture for Aitor Throup. With almost a decade of archive material and research manifestos under his belt, he’s decided to showcase it all on his newly re-launched website – announced exclusively by Dazed.

Throup’s work has always been about process. Over the years, it’s been a point of intrigue when confronted with his imposing installations and black headless horsemen during his show presentations. Today, he reveals never-before-seen sketches and reference material to coincide with the launch of his site, and talks us through his creative process.

Dazed Digital: How did you approach the curation of your newly launched digital archive?

Aitor Throup: I really needed it to be almost encyclopaedic, so you could go deeper and deeper into each concept or each project. The oldest stuff on there is from 2003. In those 10 years, I’ve done a huge variety of projects using several mediums from film, to sculpture, to painting and clothing.

DD: Your works are often contained within strong concepts or narratives, and with social and political grounding. Do these themes filter their way into your work naturally?

Aitor Throup: I don’t calculate it. I’m reacting to something that I’m thinking about and I’m interested in. From football hooligans and racism, to ethnic stereotyping issues: these are topics that have affected me personally in my upbringing and my multi cultural background. These things have defined me. I’ve experienced them and they are part of me, it’s a reactionary response to those experiences. But if you look at the “Funeral of New Orleans”, that’s not. It upset me when hurricane Katrina happened, but its nothing to do with my political views. It was just about how sad I felt. Such a beautiful city, with such idiosyncratic iconography that, you know, that just got wiped overnight. I just felt compelled to say something about it and to send a positive message. It’s just whatever affects me.

The way I think is like a product designer. I start with the problem: the fabric, and then the body and I put them together. That’s a series of solutions: it’s what you need to go through as a designer.

DD: We've just launched our Dark Arts issue, if you could’ve designed the costumes for any horror film which one would it be?

DD: Amazing! Which horror films did you watch as a child?

DD: You’re constantly exploring new technology with the construction of your garments. Why is that so important to you?

Aitor Throup: Design is problem solving. What’s massively important to me is being able to use whatever’s available. The way I think is like a product designer. I start with the problem: the fabric, and then the body and I put them together. That’s a series of solutions: it’s what you need to go through as a designer. When I graduated I had that methodology and the form but I didn’t have the processes to realise those objects in new ways. I was still borrowing other people’s solutions and approaches. I felt like I was cheating and that’s why I embarked on this journey: that button hole machine doesn’t work for me so I need to figure a button hole system that is my own, I need to figure out a shoulder construction that’s my own. It just makes the product so much purer, its more authentic.

DD: What’s next for you?

Aitor Throup: There are quite a few things going on really! We’ve got the installation that we’re expanding for Dover Street Market: the final part of it is going in tomorrow. In the meantime, I’m focusing more and more on working with musicians. I’ve been working with Kasabian on their next album. I’m also getting more and more into video direction. I wont be able to do much but I’d love to do a random TV ad or another music video.