Lee Alexander McQueen honed his tailoring prowess on the street with the world's finest men's made-to-measure. Now Sarah Burton installs a menswear store, but you won't find any curses in the lining... 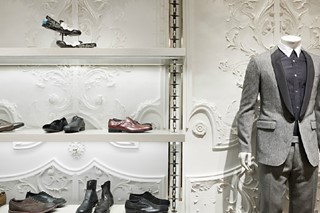 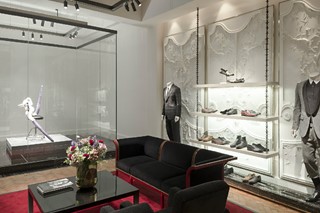 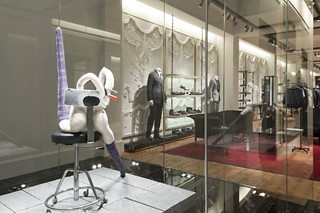 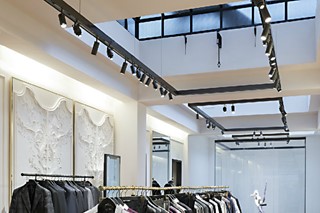 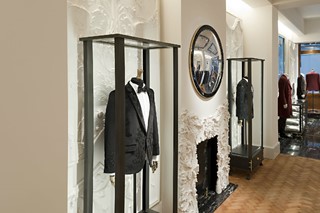 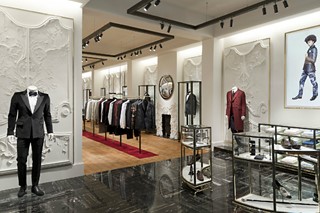 Alexander McQueen has moved in at 9 Savile Row, the world’s most hardcore tailoring address, with a menswear flagship. But it’s not the first time the name has had a dalliance with this stretch: a young Lee McQueen, before he was known by his middle name, cut his teeth as a tailoring apprentice with Anderson & Shepherd. Ever the wind-up merchant, McQueen later claimed he’d sewn ‘I am a cunt’ into the lining of a suit made for Prince Charles. (The story is possibly apocryphal – his tailor masters investigated since and found no evidence of the scrawl). A talent for theatre and concept would become his house, but it would be nothing if the cloth wasn't cut as immaculately as his vision. This is something the label, under the stellar direction of Sarah Burton, maintains today. There is no mistaking the McQueen kick-out shoulder, no matter if it’s in classic wool, degrade Prince of Wales (ahem) check, printed silk or couture embellishment, off the peg or appropriately enough, in a special to-measure service. Realising the McQ store which opened a few blocks away on Dover Street earlier this season, David Collins also designed this menswear space. We caught up with the interior designer and architect to discuss heritage and transgression.

What your first thoughts in designing this space?
David Collins: Savile Row represents the need to embrace skills and craftsmanship whilst still provoking change. I was aware of the connection Lee had with Savile Row and I wanted to ensure that I designed a concept with Sarah Burton that reflected this.

Do you have any favourite details?
David Collins: It was important to respect Lee’s legacy whilst recognising the energy of change brought about by Sarah Burton’s appointment. I was obviously inspired by Savage Beauty – but I wanted the obsessions of McQueen; anatomy, nature, fetish, sexuality, to be subtly hinted at in the details of the plaster panels which at first glance seemed conventional but reveal the world of McQueen.

What does brand embody for you?
David Collins: McQueen never loses sight of beauty in its aesthetics so it was important that the shop should not look too “of the moment” which is why the McQueen pursuit of proportions, detail, execution and craftsmanship is timeless and the art installation is constantly renewed under the curatorship of Sadie Coles who was a friend of Lee and Sarah.

You previously worked on the McQ flagship, in Dover Street. Is it rewarding to work across the different facets of the house, creating environments for each?
David Collins: It was fascinating and challenging to create two worlds for McQ and Alexander McQueen as the former is not perceived as a ‘second line’ but a brand within a brand with a different aesthetic. The labels exist in parallel but are different. The McQ store has the raw Brutalist concrete juxtaposed with the plush red carpet, almost like a pool of blood on the stairs – very McQueen! – whilst Alexander McQueen is more of the private ultra-refined, but subversive take on English design.