The cult London designer talks music and fashion mechanics in light of his new collection, opening at Cabinet gallery this evening 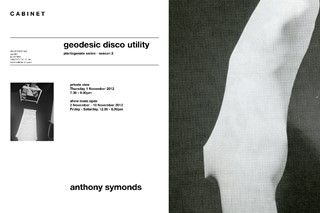 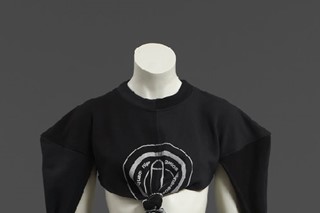 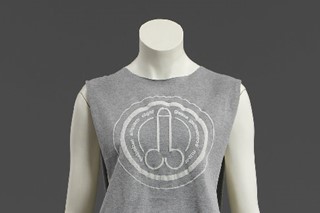 Having been part of the London fashion scene for well over two decades, it's fair to say Anthony Symonds has seen a few things. The designer grew up immersed in the 1980s music melting pot of disco/punk/new wave, a context that went on to shape his work in fashion. Hefty exposure to the retail industry also impacted on Symonds, leading him to eventually leave behind the seasonal cycle in favour of showing at a gallery space on his own terms. In line with the release of his latest collection, Geodesic Disco Utility, Dazed Digital sought Symonds out to reflect on a career that keeps on evolving.

Dazed Digital: So what is the idea behind your new collection?
Anthony Symonds: I looked a lot at armour and how it is possible to create functionality and movement from a material that has no sympathy for the human body. Conceptually speaking, I'm interested in the interplay of desire and fetishism in consumption… in the end though it's really just about making some fierce drag!

DD: How has your view on fashion progressed or changed over the years?
Anthony Symonds: Well when I went to Central Saint Martins in 1990 I had already worked for Hamnett, Galliano, PX etc. and had been hanging out on the scene since I was 14 so I felt quite jaded by everything even before I began. I saw the art school ethos as irrelevant to the outside world. All the students could do these amazing illustrations – like John (Galliano) – but didn't know what a bust dart was. Ironically, it was me that went on to do an MA in fine art and show with a gallery… so I'll shut up now!

DD: You used to work and show much differently than you do now. What has changed for you as a result?
Anthony Symonds: Instead of living in a nervous breakdown, getting trashed every night and smoking 80 fags a day, I'm now much more engaged with the experience of designing. I don't have a fancy studio in Clerkenwell and loads of staff running around anymore which conversely makes life much easier. Showing on my own terms means I actually enjoy the process instead of it being clouded by the tyranny of constant deadlines.

DD: You have always referenced music in your work, is it still a big influence?
Anthony Symonds: Always. It comes from my earliest experiences of fashion – bunking off school and hanging out in the Fiorucci store in Knightsbridge. There was always pumping disco music and it was just totally exciting – the clothes, the music and the people.

DD: Would you say fashion is more fulfilling when various aspects of art and music are involved?
Anthony Symonds: I think the plurality of art can help fashion to be more compelling – Prada and Miu Miu are cases in point. But this requires the viewer to be less lazy. Fashion occupies a strange territory of being so symbolically complex whilst simultaneously being reviled as the most superficial of cultural pursuits. My work has meaning to me and that's all that matters.

DD: How do you feel the London fashion scene has changed in the past decade?
Anthony Symonds: It has changed a lot. London has been trying to shake off its 'crazy/fun' image for years and wants to be 'taken seriously' as a fashion capital. But unfortunately apart from Westwood, Burberry and McQueen we don't really have any international brands left. Having said that there are a number of great initiatives now that are feeding new talent into the industry and this can only be a good thing.