Revisiting his archive, the designer mixed in fine jacquard fabrics with his usual sporty materials 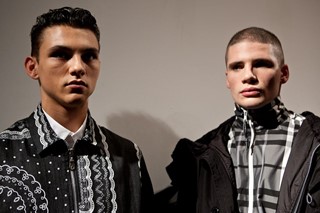 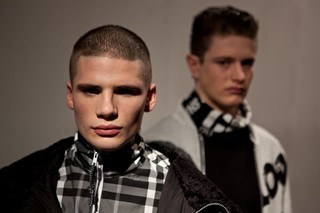 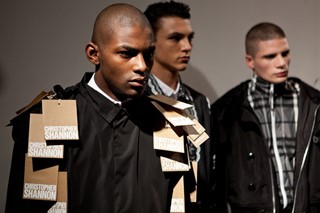 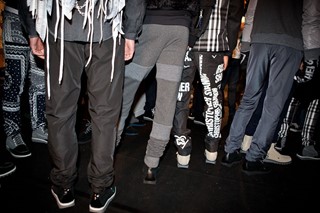 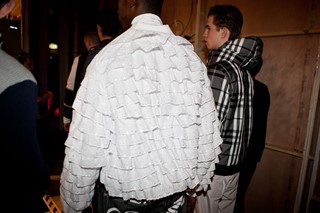 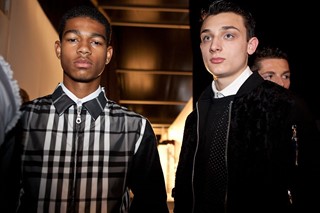 Consistently one of the highlights of London Fashion Week Menswear season after season, it was an excited audience that sat down in the BFC Courtyard Space for Christopher Shannon's Autumn Winter 12 show. Having recently launched his jersey line, Kidda, this collection was always going to be one where he tried out a few new ideas, and that he certainly did. Building in a number of bomber jackets into the show, “mainly just because I know pretty much everyone loves them”, it was proportion, volume and structure that came across.

I was actually inspired by looking out the window at the house opposite mine's curtains. I love the way that lace kind of gives that feeling of something a bit sinister but also kind of sexy. A little bit dirty, a bit saucy

Dazed Digital: There was a lot of text and imagery in this collection, where ddid the inspiration to do that come from?
Christopher Shannon: I started looking back at old references and old collections, basically I dived into our archive. Now that we have the jersey line Kidda up and running it felt like a really good time to go back and have a look at what we had done before.

DD: Can you tell me about the faces on the bombers?
Christopher Shannon: Yeah, they are again just pulled from the archive. Although they look printed they are actually woven through, it's jacquard material that we incorporated the imagery into. We found a place that can knit big photographic blankets and worked from there.

DD: Where did the lace element come from? It appeared on a few pieces including the back of the oversized bomber?
Christopher Shannon: I was actually inspired by looking out the window at the house opposite mine's curtains. I love the way that lace kind of gives that feeling of something a bit sinister but also kind of sexy. A little bit dirty, a bit saucy.

DD: It felt like this was a collection that was a bit more grown up. Is that something you wanted to do?
Christopher Shannon: It looked the way I wanted it to, it was definitely sharp and I think that's what I was aiming for.

DD: Why did you want to do that?
Christopher Shannon: Now that we have Kidda I think it gives me the freedom to push the boat out a bit. I was always worried previously about the cost of pieces, or about how we were going to force all these ideas into one collection. With having the jersey line it means we have the freedom to do a few different things.