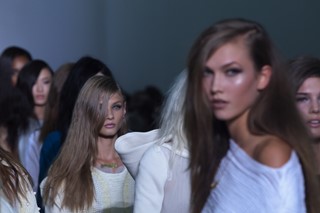 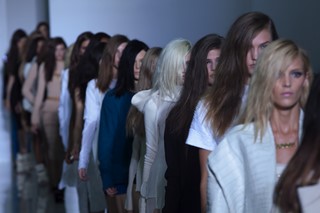 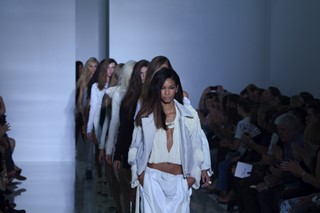 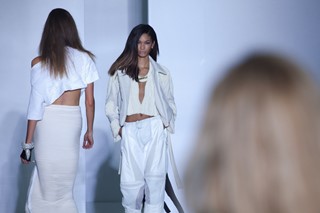 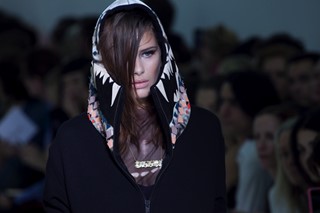 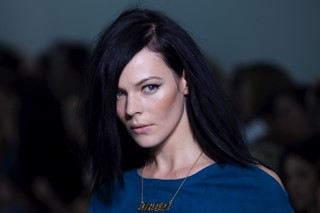 Kanye West's debut show definitely got the industry talking and wondering.   Most were intrigued not just because Kanye West himself has been displaying his passion for fashion by attending shows studiously, attempting to apply for internships and seeking counsel from the best of the best such as Central Saint Martins MA course director Louise Wilson, and in addition the names floated, behind the making and inception of the collection include knitwear designer Louise Goldin and young guns Dean Quinn and Katie Eary. Then you have the lot that want to snub it completely. You want to bring it down so fast because West has displayed previous misdemeanours of self-aggrandisement and despite his proven musical prowess, eyebrows were of course raised at his announced foray into fashion. The twitter flurry post show were eye-wincingly scathing, criticising the wintry feel of a S/S show and the fit of the clothing.  Despite the rookie debut, I'd venture to say that there's something to be unearthed in West's ambition for fashion.

The riffs off of designers that West personally admires is clear to see - the likes of Olivier Theyskens, Alexander Wang and Joseph Altuzarra were present at the show and perhaps they saw inklings of their own work in some of the pieces. Mashing up fashion like West does with music is to be expected and better yet, there was certainly a clear intention to be directional and even if the effect was not quite pitch perfect.  The hotchpotch included spliced leather jackets, heavily pearl-embellished bombers, body con clashed dresses, colour blocked trousers, ragged knitwear, voluminous miniskirts that wrapped their way around the waist, a gigantic fur backpack and a few smatterings of gold necklaces that said 'Yeez' just to remind everyone of where we were.  There was something to be said for the choice of textiles, the shapes and in the surface embellishment even if finishing left something to be desired.  West said that the buildup to the debut of his label involved 'seven years of hurt and pain' - that may be an exaggeration but it's clear to see how much fashion does mean to him, even if the collection didn't reach the highs of his music.

None of this commentary will bring the Kanyeezy down and Azzedine Alaia, Franca Sozzani and Carine Roitfelt - whose fashion status is equivalent to West's own in the music world - all congratulated him enthusiastically backstage.  That's enough encouragement and support there for West to find his groove.  When asked how he would sum up the collection, West spoke of the desire to improve, which is more hubris than expected:

"It's the sum of everything that all me and my friends have worked up for - every fashion show we went to, every store we visited and every dream we have when we grabbed fabrics. Of course everybody said we couldn't do it and all me and my friends came together and did something special. I think. I just want to keep getting better."