The French designer opened the show with an eye opener as models strutted down the runway in their underwear, Dazed caught up with Mabille after the show to chat about pretty boys in pretty underwear 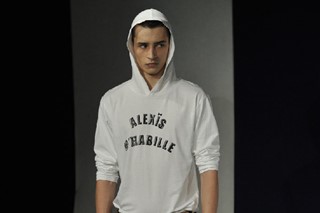 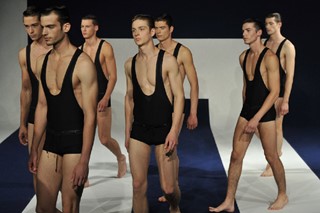 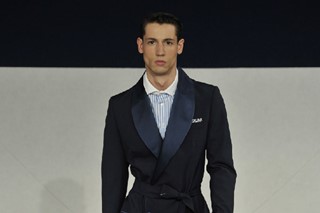 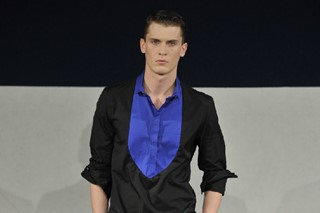 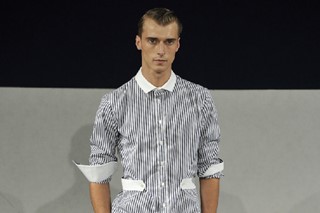 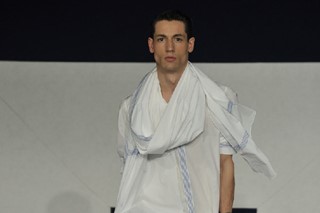 We might be used to seeing full frontal nudity in every fashion magazine – but when Alexis Mabille’s models opened the show by stripping down to their undies, the crowd went crimson-cheeked. This collection was sponsored by men’s lingerie brand Hom, which famously introduced male thongs into a high street market, and led the young French designer to question the boundaries between inner and outer wear, and to decline a line of robes, underwear in tune with this season’s style. The rest of the collection appropriated, Alexis-style, the mandatory Biarritz look present on catwalks worldwide: blues and whites, cropped cargo pants, sportswear mixed with dinner jackets, and even leopard skin handbags. Dazed Digital chatted to him after the show about boys, boys, boys, looking for a good time.

Dazed Digital: Why was designing a line of underwear something appealing to you?
Alexis Mabille: It is something I’m personally crazy about, and have always put into my collections. This also allowed me to offer affordable pieces – t-shirts, pyjamas, underwear, and therefore to appeal to a younger crowd.

DD: The boys are rather muscular, unlike the contemporary androgynous trend – are masculine beauty ideals changing?
AM: We wanted pretty boys, with pretty bodies, in pretty underwear. But they also had to be healthy, and natural.

DD: How does this reflect onto the clothes?
AM: There is a definite lightness, a beachy, summer feel expressed through blues and white— which is recurrent in my designs; there is also a mix of navy with lighter tones, to create something both chic and sportswear.

DD: Who is the Mabille boy, what does he like, what does he do?
AM: He’s like me! It’s rather selfish, I know. He is confident – which is why some things don’t seem like a natural match, like mixing sportswear and suits, and to let things go a little wild. That’s what fashion is about: you like clothes, you acquire pieces from different places, and every morning you compose a new look depending on your mood.