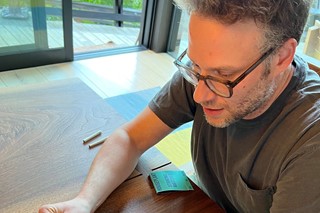 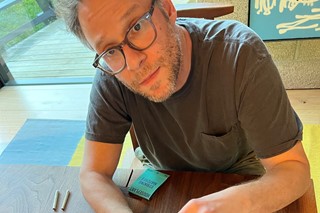 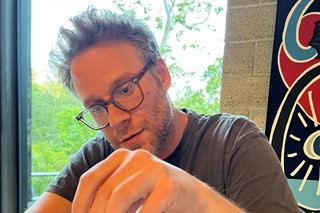 Seth Rogen has really been on an acrylic nail journey this year. He first debuted a manicured look back in April with a stunning green and blue set that perfectly matched his handmade joint ashtray. Created by Nails by Mei, AKA Mei Kawajiri, the manicure featured blue 3D globs which mirrored the gloopy texture of the ceramic – and it was a big hit with everyone.

Following the high of that success, Rogen has continued experimenting with Kawajiri to create other ceramic-themed nail looks. Now he has even taken the next step, revealing in a new video how exactly he rolls his joints with the acrylics on.

Appearing to still be fully coming to grips with long acrylics, Rogen is a little clumsy while rolling the joint and the process isn’t as seamless as you might imagine from someone who smokes “a truly ungodly amount of weed”. Thankfully, against all odds, he does eventually succeed. “Not fucking bad,” he declares once the joint is complete.

Although Rogen is still learning, he might actually come to find that acrylics can make rolling easier. Hatti Rex, our head of social, has some tips for him to make the process smoother and, even, better. “Having acrylic nails gives you more of a ledge between your finger and the nail, which makes it easier to both hold the paper and then roll it with your thumb and forefinger. If you don’t have nails it can be way more fiddly and harder to keep in place,” she says. “You can also use your little fingernail as a pokey to pack the weed and tobacco down.”

Responses on the team were not unanimous, however, and one anonymous source sympathised with Rogen. “Having nails definitely doesn’t make it any easier to roll. There’s a lot of clumsiness that comes with the initial stage when you’re still getting used to them. But then it’s fine.”

Write in and let us know whether you find it harder or easier to roll with acrylics on, reader! And in the meantime, get an insider’s look at how Kawajiri created the first manicured set here and watch the full video for yourself below.

Here’s me rolling a joint with these nails: pic.twitter.com/FDTxU3Nwoh