To protest France’s clampdown on Islamic dressing, demonstrators held a ‘Wear What You Want’ beach party in London yesterday 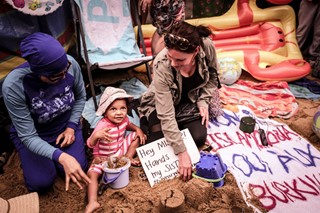 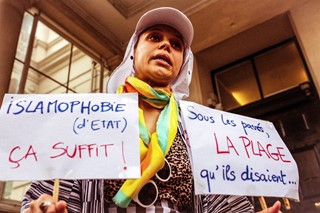 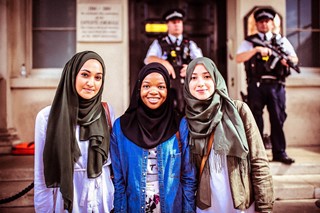 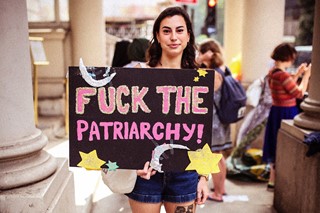 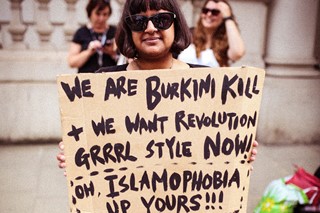 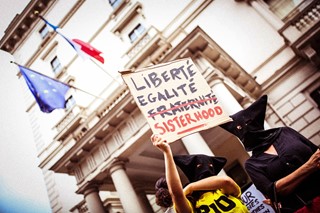 On August 11, the mayor of Cannes banned women from wearing burkinis on the beach, citing them as a “symbol of Islamic extremism”. Once the motion passed, 15 other cities in France followed suit. The ban sent shockwaves around the world when, two days ago, armed police were pictured forcing a 34-year-old woman called Siam to strip on the beach and remove her burkini. (In fact, she wasn't even wearing a burkini, but a headscarf and leggings.)

In an act of solidarity, protestors in London organised a ‘Wear What You Want’ beach party outside the French embassy yesterday (August 25). Campaigns were also launched to reimburse Siam, who was reportedly fined for the incident. “The ban is nothing more than a culmination of racism, patriarchy and Islamophobia that is embedded within so many different institutions,” said Hareem, NUS Women's Officer, and Bee, founder of Black Blossoms. “This sets a dangerous precedent worldwide... If our feminism doesn't extend to the most marginalised sub-sections, then who is it really serving?” Outside the embassy, we caught up with protesters who had turned out to show support for Siam.

“It’s important to not just fixate on France. It happens here in the UK too, just not in the same way yet” – Muinat

“Most people are angry and annoyed about the ban I think. The response seems to be because of the unfortunate number of attacks. But it is offensive conflating terrorism and our religious dress. This isn't happening just in France, the attitude is across Europe. There has been such a lack of productive dialogue.”

“I came here in solidarity because people should wear what they want, wherever they are. I can't believe someone came with weapons and forced her to take her clothes off – we have a right to wear whatever we want. It is our right and freedom to do that. With France and Europe, everyone should be the same, and able to fully participate in society.”

“I am here protesting the ban and to voice anger about what is happening to my French sisters. Policing bodies is so wrong. It feels like being a woman and a Muslim is a double bind, but I am happy with how the protest has turned out. Earlier, I was complaining that the white feminist community had not voiced enough objection to what has happened in France. Still, while I am surprised that no white feminist heavyweights have spoken out in solidarity, the ordinary women that have turned up today have restored my faith.”

“I feel that it’s important to not just fixate on France. It happens here in the UK too, but not in the same way yet. I went to Portugal and they we go on the beach and nobody had a problem... The way it should be!”

Interviews have been edited and condensed for length