When Inis Oírr – aka Craggy Island – played host to raucous culture biennial Drop Everything this weekend, its population doubled in size 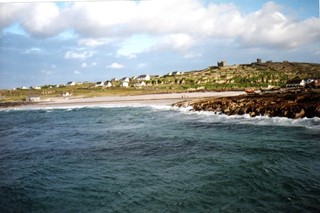 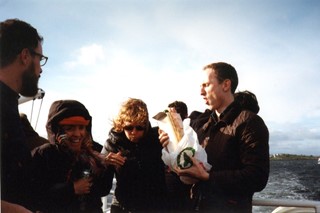 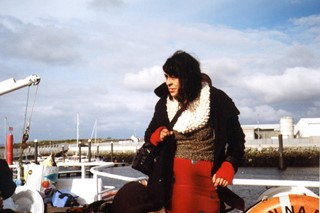 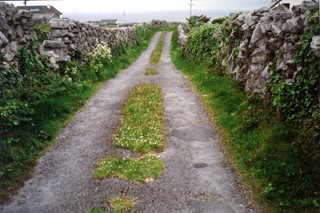 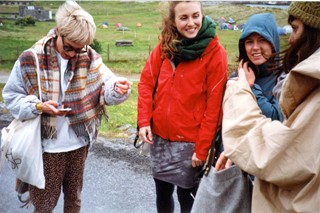 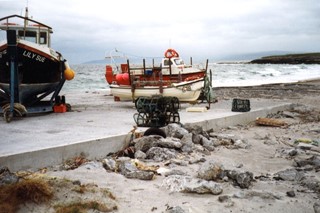 Docking into Inis Oírr, the smallest of the Aran islands, you begin to forget that there are more important things than a waterproof windbreaker. It’s late May and it’s freezing. Made famous as Craggy Island in the opening credits of Father Ted, Inis Oírr and the other two Arans lie just off the west coast of Ireland, the last stop in the Atlantic before America. Everyone and their tents got soaked by a mammoth wave on a routine ferry journey from the mainland, and the blinding gale made sure we didn’t get too comfortable. Thankfully, Dusty the dolphin is here to welcome the onslaught of festival-goers, here to soak in some culture and Guinness at Drop Everything, a biennial festival that blends talks, installations, DJ sets and performances.

It’s a bit of a Homeward Bound to get here, and there’s a reason why: to weed out the non-committal. “I suppose I want people to make more of an effort so they are more aware of what they are doing, and it's not just like fucking off to another festival getting mad out of it,” explains Mary Nally, the event’s chief organiser. For these three days, the population doubles to over 400 (!) people.

Nally is freaking out. She has just remembered that she had arranged to meet everyone arriving on the 6:30pm ferry. “You forget you actually need to be in 17 places at once, or that the boat’s going to arrive and you have arranged to pick up everybody,” she says. “It’s like, ‘Oh shit! They're all here…’” With virtually every cupboard on the island co-opted for the weekend, things are a bit frantic, but there is an air of excitement as a bunch of townies descend on a godforsaken island with their wares and wide eyes. “They're coming to meet people who are in creative industries, to party and do a bit of work-play, you know?”

The schedule is jam-packed with performances and talks; appropriately, “*Everything is subject to change” is fine-printed along the bottom of the schedule. Every public space (you can count them on one hand) has been commandeered for the event. Super/collider do an astronomical installation entitled "Skyhenge" on the beach. Visual artist Sougwen Chung plays with light in an installation in the local handball alley. Molly Nilsson deadpans through a bizarre, pared-down indie set. And the fest is catered by Dublin and Galway favourites The Fumbally and Ard Bia. On a more personal high, I also learn how to knit from one of the world's best Aran knitters.

“I suppose I want people to make more of an effort so they are more aware of what they are doing, and it's not just like fucking off to another festival getting mad out of it” – Mary Nally

In a bit of a heartwarming, full circle story, poet/playwright Buffalo Woman (real name Neil Watkins) recalls his experience of the first time he came to Drop Everything, in 2012: “I remember everyone being so cool. I started to drink on the ferry and arrived twisted and kept going. I must have done a lot of something. And I blacked out. The next day I woke up in a strange cottage wondering how I got there. My belt was loosened, but that was it. There I was in an armchair wondering how I'd got here.” Where his “very cozy walk of shame” ended up is documented in the lyrics of his song “Drop Everything”, a musical ode to his festival experience, and the track which he performed on the last day to polish off this year’s festival. “I had dreaded coming back to Ireland,” Watkins says. “Drop Everything made Ireland magical and opened up a new world to me.”

To picture hundreds descending on a walkable island to collaborate and get crunk is quite a sight. So what’s the point? “I just wanted people to have a craic, you know?” laughs Nally, who set up the festival in 2012 to celebrate the “brilliant people that work hard at doing brilliant things that make Ireland not completely shit". “I want people to come and actually be forced to have no phone signal and meet new people and just take a bit of time on this island and be in this very ridiculous space.”

“I had dreaded coming back to Ireland. Drop Everything made Ireland magical and opened up a new world to me” – Buffalo Woman

For three days, the island is overrun with creative collaboration, ideas born out of drunken conversations, yet there is not a business card in sight. The best part of it all is that you come away with a renewed hope that some creatives aren’t shielding their ideas book from potential thieves, but rather cattle-prodding them into existence with new friends. “I don’t set out for Drop Everything to be unique or different,” Nally says. She simply saw an opportunity to fertilise a bit of creative connection. “I just wanted to bring a bunch of interesting, creative people to this space so that they could meet each other, and hopefully that my audience would appreciate that as well. Everyone’s chipped in to make this work in whatever capacity.”

And after three days, the hard work has paid off tenfold, and Nally is rip-roaringly enthusiastic for 2016's instalment. Her personal highlight? “Crowdsurfing on Friday night was kind of fun!” she beams. So what's next for her now that Drop Everything is over? “Maybe I’ll have a pint of Guinness…”