Neil Massey documented young fans queuing up to see Eminem and Marilyn Manson, when the artists were at the height of their fame 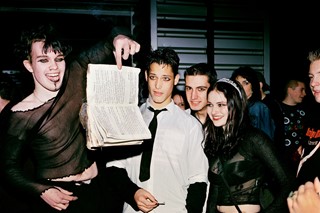 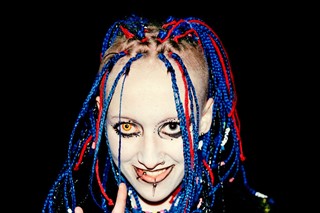 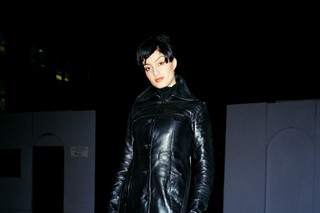 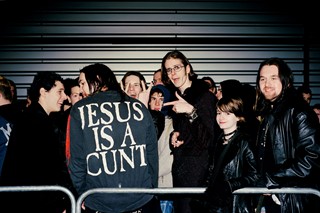 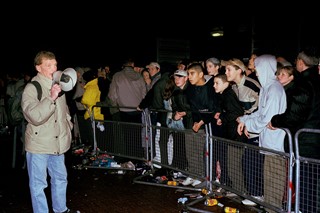 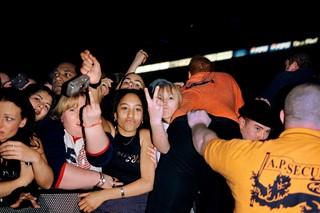 The 2000s really did start as they meant to go on. With many people in 1999 frantically preparing for the end times, and to return to a pre-computer world, it’s no surprise that a feeling of confusion and hysteria crept into the new decade. At the start of the 2000s, Eminem and Marilyn Manson were artists who had been both lauded and condemned for their transgressive music and performances – the latter of whom now of course faces serious allegations of abuse. And while the two artists were noticeably different in their musical output, both of them embraced the dark and the depraved in their music and, very early on in their careers, sparked outrage in governments, schools, churches and even the homes of their listeners.

Photographer Neil Massey captured the frenzy that ensued around Eminem and Manson when they played gigs at the London Docklands Arena back in 2001. The images remained undeveloped until 2020, when Massey worked with the Museum of Youth Culture to compile them into a new zine titled The Way I am/Disposable Teen, which features two alternate covers you can flip between. The zine offers a nostalgic window into a period that, despite the middle fingers and cultish make-up, carries an innocence greater than that of our own. The photos capture a time of frenzied fandom before the internet fully enveloped our lives, when teens clung to subcultures as if their very lives depended on it. “Eminem and Manson just tapped into this hysteria and stoked the fires of adolescence and parental fears,” the photographer tells Dazed in a conversation over email.

Just as The Sex Pistols had done in the 1970s and The Rolling Stones in the 1960s, Manson and Eminem made music to challenge, provoke and excite. For young people growing up amid the banality of suburban life, the spectacle of a hockey-masked Eminem striding onto the stage, chainsaw in hand, naturally sparked an internal flame. “Most of the fans are between 12 to 19, you can feel the teen angst and discovery you experience through adolescence. You can see the tight connection between groups of friends,” Massey explains. “It definitely felt tribal and there was an ownership of their beloved artists, especially as the media were against them.”

Below, Dazed spoke to Massey to hear about his experiences of photographing the crowds, his vivid recollections of the period, and the vast changes in the cultural landscape.

Could you describe the frenzy and hype around these concerts?

Neil Massey: The media were in overdrive back in early 2001. Manson was first up at The London Docklands Arena in January, he had just played Manchester three days earlier. Eminem rocked up to the same venue one month later and, when he was asked by an interview on a children’s show CD:UK, “What do you think of British audiences?” He replied, “I gotta admit man, the audiences over here are more crazy than in the States. I would even go as far as to say better, more responsive and louder.”

What are your recollections from those times?

Neil Massey: Anyone who’s seen the Woodstock 99 documentary will know that there was something crazy in the air with the nu-metal and hip-hop scenes in the late 90s. This spilled over into the early 2000s – everything felt quite lairy, provocative and in your face. During this time, I was a working photographer, commissioned to take pictures of youth culture and artists for magazines. I was just immersed in everything around me, constantly shooting. It was a lot of fun.

By the time the 00s happened, I was ready, camera in hand, to document these different youth tribes. In 2020, I started to scan my negative film archive of this work resulting in this zine but also a wider body of work which I’m calling Millenium Dawn (2000-05). It’s only now, 20 years later, I’m making sense of this work.

What was your perspective on these movements of youth culture you were documenting?

Neil Massey: At 15, I went to my first punk gig to see The Damned. Then, in my late teens, I got into raves. Once I got into my 20s and 30s as a photographer, the next generations of youth movements still resonated with me. Around this time, I started to understand the historical value of documentary photography. I was on a mission, photographing ravers, metallers, goths and hip-hop heads. Looking back, it was a special time for youth culture. On millennium eve there was a genuine fear that all the world’s computers would crash due to the Millennium Bug. This was a time pre Facebook, Instagram, YouTube and Twitter; a time before the self-promotion and general self-awareness that social media now brings. Everything felt somehow slowed down and more present.

What differences and similarities did you find between the media’s depiction of the crowds and your own experience of them?

Neil Massey: Personally, I felt there was nothing threatening about the crowds outside and inside the gig. In my mind, it was just young people being young. I loved the energy of both sets of fans. Being one of the few photographers outside taking portraits, I was able to move around freely, to interact and capture the fans. Even when I was heckled and given the middle finger – a lot – I thought it was all great.

What are your enduring recollections of these gigs and the crowds? Are there any individuals or incidents that stick in your mind that you could tell us about?

Neil Massey: There was the Liverpudlian preacher man – used to see him down London’s Oxford Street – lamenting the evils of consumerism with his bullhorn. At both these gigs he was trying, against all odds, to save these young teenage souls. I also thought ‘The Eminem Six’ were hilarious – six teens with matching peroxide hair.

Do you think subcultures today are in decline? If so, what factors are threatening their continued survival?

Neil Massey: No, I don’t think subcultures are in decline. They have evolved and changed the way they did from the end of the 20th century. The teen subcultures in Y2K were the first shift towards online forums and communities like MySpace. I think the subcultures may not be as uniform and defined in their style as they were before, there may be more styles and influences blended in together. Saying all that, go check out the queue for a Nova Twins gig and you’ll find that same spirit captured in these photos. Underground music and fashion are still very much alive.

How do you think the zine speaks to the themes of fandom, friendships, and adolescence?

Neil Massey: The way bands were experienced back then was magazines, TV and gigs. So a gig environment was a special meeting place for fans to connect.

Could you tell us about any portraits that most stick in your mind from this series?

Neil Massey: We have two covers for the zine, the Disposable Teen cover girl proudly showed me a goat’s eyeball she was carrying in a clear box. Also, The Way I Am cover boy with an ice hockey mask wearing a Manson top at the Eminem gig sums up the attitude perfectly. ‘Shady Brothers’ sticks in my mind... three brothers and a friend. The older brother who’s wearing a Korn tee is taking his younger brothers in Eminem and Manson teeshirts to the gig, all clutching a carpet burger.

The Way I am/Disposable Teen is published on January 24, 2023. The Museum of Youth Culture is hosting a pop-up event on the day, reserve tickets here.