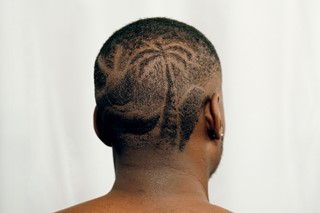 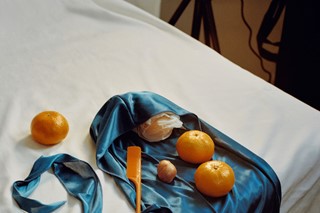 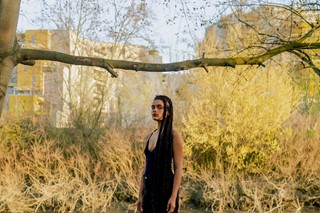 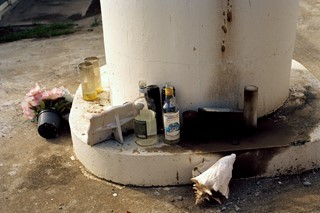 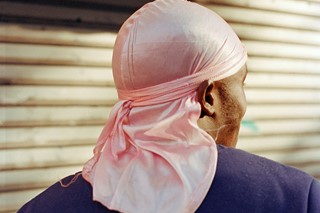 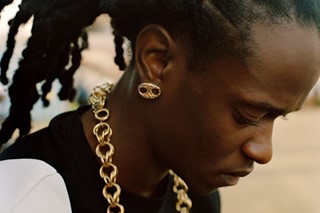 In his seminal book Poétique de la Relation (Poetics of Relation), the revered Martinique writer, philosopher and critic Édouard Glissant argued that poetics – whether expressed through art or literature – has a political and aesthetic function. His writings directly inspire the work of the 28-year-old French Caribbean photographer Cédrine Scheidig, the winner of the Dior Prize for Photography 2021. Her upcoming solo presentation, de la mer à la terre (Maison Européenne de la Photographie in Paris), contemplates the complex identity of the Black diaspora.

Bringing together two recent bodies of work – It is a Blessing to be the Color of Earth (2020), and Les mornes, le feu (The dunes, the fire) (2022) – her new exhibition proposes a dialogue between two geographical locations: the Parisian suburbs and the French overseas territory of Martinique. A reflection of her dual identity, Scheidig’s work celebrates the youth culture of today’s globally scattered Afro-Caribbean communities. But by doing so, she also challenges the medium of photography itself: “My work is about capturing the lighter, more poetic representations of the Black diaspora, rather than portraying those communities amongst suffering, which has so often been the case in the history of photography.”

“I work with portraiture because it captures a moment of encounter, through which we can find someone’s vulnerability and learn to empathise with them” – Cédrine Scheidig

Born in Bobigny, a banlieue [or suburb] in northeast Paris, Scheidig’s mixed heritage was shared by most people from her community, many of whom also had relatives who emigrated to France from French overseas territories in the Caribbean during the Windrush era. “For us, ‘home’ isn’t strictly Paris, or France, or the Caribbean – the banlieue has its own identity and culture, almost like a third island.” The idea of the third island – or third space – in postcolonial thought refers to the notion of hybridity, which in layman’s terms means a transcultural space  – geographical, cultural or linguistic – that is inextricably tied to the histories of colonialism. In this in-between space, there is also resistance against the prevailing systems of power. Scheidig tells Dazed, “My exploration of Caribbean spaces is a way to explore territories of hybridity – neither French or completely independent from French culture and history.”

Expanding upon this idea, the title of Scheidig’s show De La Mer À Terre (Of the Sea and Earth) evokes transatlantic connections between multiple sites and cultures; the interrelation between French overseas territories in the Caribbean such as Martinique and Guadeloupe (where her father is from), to diverse European cities such as Paris, and even to Africa – the ancestral root. “I’ve always been told I’m French, but that doesn’t mean I identify with that culture in a practical sense,” she admits – and her work is an exploration of that ambivalence.

“For us, ‘home’ isn’t strictly Paris, or France, or the Caribbean – the banlieue has its own identity and culture, almost like a third island” – Cédrine Scheidig

Adopting an intuitive approach, Scheidig prefers to work slowly. She builds up her portfolio as a creative durational process that is inseparable to the meaning of her final images. “I like to revisit places and people over long stretches of time. It allows me to become more sensitive to that environment, and that’s when my photographs become stronger.” She creates and carefully selects shots that are imbued with a delicate yet broader gaze, “capturing an overall sense of place.”

Although focusing on portraiture, Scheidig’s work is not strictly centred on a subject’s individual identity. Rather, her vision focuses on the finer, subtle details – the juxtaposition of colours, textures and the play of light as way to create beauty, and thereby, also compassion. “My work is a search for vulnerability. It’s about trying to connect with other people,” she tells Dazed. Her reverse portraits – often highlighting her subjects from behind – create images that are instantaneously close yet mysterious, intimate yet universal, empowering but also vulnerable. “I work with portraiture because it captures a moment of encounter, through which we can find someone’s vulnerability and learn to empathise with them.”

In “Palmier” (2021), the artist’s favourite image in the show – the back of a woman’s head has been shaved into a tropical landscape. ‘This was my first attempt at more staged photography. It’s the idea of embodying a concept within the picture… those hairstyles speak to urban culture and a search for identity, but also play upon certain stereotypes. There are multiple layers of meaning in this picture that require a deeper reading.”

According to Glissant, through a poetic vision, we can begin to build new imaginaries – and propose alternative ways of understanding others. In this sense, the poetic is political: “I’m reclaiming a space of vulnerability for Black bodies,” Scheidig explains. For the artist, this is the first step in dismantling dominant cultural perceptions that trickle out into real-world attitudes: “It’s about a kind of humanism… I’m thinking about how to connect with people on a deeper level through photography.”

Join Dazed Club and be part of our world! You get exclusive access to events, parties, festivals and our editors, as well as a free subscription to Dazed for a year. Join for £5/month today.
Art & PhotographyLightboxParisPortraitsculturePhotographersexhibition